Thoren Smallwood is a member of House Smallwood and a ranger of the Night's Watch.[3]

Thoren is sinewy with a weak chin and mouth hidden beneath a thin beard.[3] He wields a longsword.[2]

Thoren's demeanor is lordly[4] and aggressive.[5] He is friends with Ser Alliser Thorne[3] and hates wildlings,[6] with the exception of Craster.[7] Thoren is distrustful of weirwoods.[4]

Long ago Thoren told Jeor Mormont, Lord Commander of the Night's Watch, that Craster gives his sons to the wood.[7] 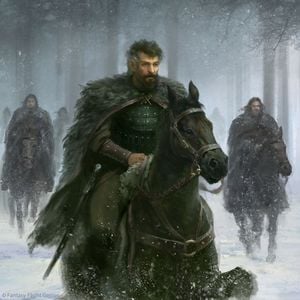 According to Jon Snow, Thoren was a henchman of Ser Alliser Thorne, the former master-at-arms of Castle Black, and Thoren dislikes Jon and Samwell Tarly.[3] Following the death of Ser Jaremy Rykker, command of the rangers falls to Thoren, who takes Jaremy's heavy breastplate and sable-trimmed cloak for himself.[7] Thoren attempts to convince Lord Commander Jeor Mormont that he should command the upcoming great ranging, not Jeor. He is rebuffed by the Lord Commander, who insists that Benjen Stark is still First Ranger until his fate is confirmed.[3]

Thoren is one of the senior officers during the expedition beyond the Wall, commanding the rangers. In the column, he commands the vanguard.[4] At Whitetree he sends foragers in search of game.[4]

Thoren recognizes the advantageous position of the Fist of the First Men, and Jeor restricts Thoren's rangers to patrolling the eastern bank of the Milkwater.[8] During a meeting of the officers, Thoren argues that the Night's Watch should advance into the Frostfangs and battle Mance Rayder's host of wildlings. Lord Commander Mormont decides to send small scouting groups into the mountains to seek out the wildling camp, however.[9] Thoren's name comes up by Qhorin Halfhand as a possible leader for one of the scouting groups.[9]

Thoren leads one of the search parties looking for the wildling host, finding them along the Milkwater in the Frostfangs. His scouts include Kedge Whiteye and Bannen.[5] After returning to the Fist, Thoren convinces Ser Mallador Locke and Jeor Mormont that the Night's Watch should surprise Mance's host.[5]

Before the Night's Watch departs the Fist, however, they are attacked by wights. During the fight at the Fist, Thoren coordinates the firing of fire arrows against the undead. As the Night's Watch is being defeated, Thoren advocates sending the reserve to hold the west wall of the Fist, but Lord Commander Mormont has him call them back to cut their way out. When a dead bear comes upon the commanders of the Night's Watch, Thoren charges the animal. He nearly takes the bear's head off with his longsword, but the beast then takes Thoren's own head from his shoulders.[2]

As the Night's Watch retreats to Craster's Keep, Ronnel Harclay replaces Thoren as commander of the remaining rangers.[10] After Jeor Mormont's death in the mutiny at Craster's Keep, Jon Snow briefly contemplates Thoren succeeding as Lord Commander, but Jon remembers that Thoren is dead.[11]


Jarman: There are goats among these sheep, Thoren. Aye, and maybe a few lions. Rattleshirt, Harma the Dogshead, Alfyn Crowkiller ...


Thoren: I know them as well as you do, Buckwell. And I mean to have their heads, every one. These are wildlings. No soldiers. A few hundred heroes, drunk most like, amidst a great horde of women, children, and thralls. We will sweep over them and send them howling back to their hovels.[9]
—Thoren and Jarman Buckwell

This King-beyond-the-Wall will never look for us so far north. And this great host of his is a shambling horde, full of useless mouths who won't know what end of a sword to hold. One blow will take all the fight out of them and send them howling back to their hovels for another fifty years.[5]

Ottyn: We are the shield that guards the realms of men. You do not throw away your shield for no good purpose.
Thoren: In a swordfight, a man's surest defense is the swift stroke that slays his foe, not cringing behind a shield.[5]

Only fools like Thoren Smallwood despise the wildlings. They are as brave as we are, Jon.[6]