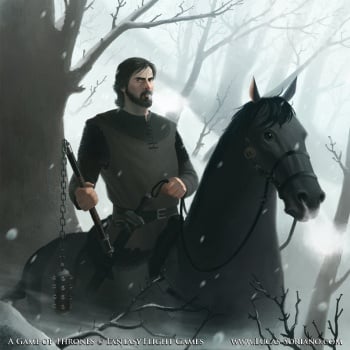 A Stane of Skagos once briefly served as First Ranger.[2]

With First Ranger Benjen Stark missing during a ranging beyond the Wall, Ser Jaremy Rykker commands the rangers in Benjen's absence.[1] However, Jaremy is slain by a wight.[4]

Thoren Smallwood declares he is First Ranger, but Lord Commander Jeor Mormont insists that Benjen will remain First Ranger until his fate is confirmed.[5]

Thoren is killed during the fight at the Fist.[6] Ronnel Harclay commands the rangers after the death of Thoren's death.[7]

Black Jack Bulwer serves as First Ranger,[8] but he is slain by the Weeper while ranging north of the Wall.[9]