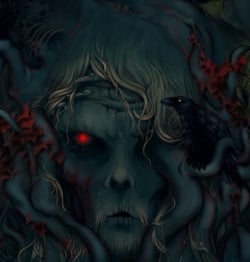 Melisandre is in her chambers, looking into the fire and trying to receive her visions. When she looks for Stannis, she sees eyeless faces staring out, crying blood. Then she sees towers by the sea followed by skulls rising out of the ocean turning to mist and great winged beasts flying in the sky. She tries to see the girl on the fleeing horse again as she knows Jon will want to know more, but she cannot find anything. She does see that there is death around Jon and that dangers and enemies lurk all around him.

When Devan asks her what she sees, she replies with her usual answer "Much and more." She does not let him know how difficult it is or how much pain she endures to try and see these things, for fear of letting others know that this task is not as simple as she lets on. Melisandre knows and sees that Davos is the most loyal to Stannis thus she has kept Devan back against the young boy's wishes. She knows that Davos has lost too many sons already and although Stannis has ridden out, she keeps the boy in order to save one of Davos' sons.

Melisandre does not sleep much, often just an hour a night, as she fears to dream and what she sees there, re-occurring images of the words "Lot Seven" and "Melony".

She sends Devan to go get Rattleshirt and bring him to her. She speaks with him and tells him to keep his bones on, in order to keep the glamor spell active. She also asks that he go and fetch the girl she saw on the dying horse. She tells him of her vision and asks him where the girl might be coming up, and, knowing the North well, he can guess her location, west of Long Lake. Their talk is disrupted by the single long drone of a horn, marking the return of the rangers. She tells Rattleshirt to wait for him there and she goes to see the rangers, thinking of her prediction of three dead rangers.

Upon arrival she sees Jon with the heads of Black Jack Bulwer, Hairy Hal and Garth Greyfeather, impaled on spears.[1] She walks with Jon and they go back to her room. There he sees Rattleshirt, but she removes the glamor to show him that he is actually Mance Rayder, whom she has spared. She tells him that he will bring Jon back his sister, but Jon mistrusts her. She does not reveal the difficulty of her glamor spell to the men, thinking to herself that the more effortless sorcery appears, the more men fear it and her.