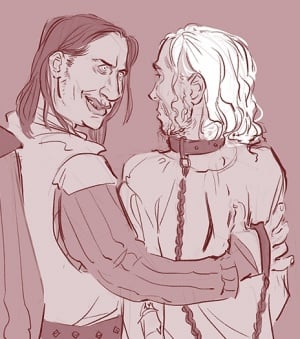 Ramsay and Theon - by Eeba-ism ©

Ben Bones, Skinner, Sour Alyn, and Damon Dance-for-Me return to the keep of House Stout from a search for some Frey men with Ramsay Bolton. Theon knows this means that Ramsay may want to take his anger out on someone, most likely Reek. He knows that Ramsay has been forced to restrain his violent outbursts in Barrowton as he needs the loyalty of the Dustins and Ryswells, but what he does behind closed doors is none of their concern. Ramsay then throws a severed head for Theon to catch, which he cannot because of his maimed hands. He does not recognize the head as it is covered in blood, rotting, and bursting with maggots.

Theon is then ordered to put away the men's horses. He is followed by Big Walder Frey, who, Theon notes, does not take after his older cousin in the malicious ways of the flayed men. Theon asks Big Walder who the man's head belonged to, and he replies it was just an old man who called Ramsay "Lord Snow."

Then there is a feast, and Theon is chained to the wall and waits his turn to eat, though the dogs provide the night's entertainment fighting each other for scraps. Theon remembers when Ramsay told him that all the dogs are named after peasant girls he hunted, raped, flayed, and killed. He notes the next litter will likely include a Kyra. It is then that Roose Bolton enters the hall with some of his men. Here it is discovered what happened to the Frey men and why they were searching. The Freys rode ahead of the procession of the Manderlys. Wyman Manderly stopped frequently to feast, but the Freys rode on and disappeared. Roose says that Hosteen Frey and Aenys Frey are distressed, but Ramsay says it is of no concern, as there are plenty of Frey men at the Twins.

Ramsay and Roose argue; Roose says that his son is acting brash and foolish and drawing attention to himself with his cruel and barbaric amusements, that his fore-bears were no fools. He notes that they have powerful allies in the Freys and the Lannisters, but the northmen despise them and only accept House Bolton's authority grudgingly (with only the exception of Lady Barbrey Dustin, whose support Ramsay would cast aside because she hates him; Roose points out that Lady Dustin was fond of his late son, Domeric Bolton, and holds Ramsay responsible for his death). They talk briefly about the dead sons of the Starks, and what might happen if they were to "return" from the dead; Roose angrily chides his son for openly discussing his part in the Sack of Winterfell, pointing out that their northern vassals would turn on them in an instant if they learned the truth. Roose then changes the subject by informing Ramsay that Stannis has marched from the Wall, adding that it is not towards the intended trap at the Dreadfort that the Karstarks baited, thus revealing that the Karstarks are double-crossing Stannis.[1]

Roose tells Ramsay he is to wed the fake Arya Stark not in Barrowton, but in Winterfell. By doing so, the clansmen who follow Stannis will be incensed to march on the keep, something they would not do while the Boltons are in Barrowton; once Stannis lays siege to Winterfell, Arnolf will turn on him there. Roose then takes Theon away from Ramsay. Ramsay tells Theon to observe everything and report back to him, but he is to say nothing about his treatment to Roose.

As they ride to Barrow Hall, Roose tells Theon he knows what his bastard son has asked of him. He goes on to say that he knows what the real Reek was like, the opposite of what Ramsay has turned Theon into. He notes that he provided the first Reek as a servant to the unruly young Ramsay; he had intended it to be a cruel joke, but is now uncertain whether Reek corrupted Ramsay or the other way around. Ramsay was the child of a rape, one that Roose is not proud of; he chanced upon the beautiful young wife of an old miller while out hunting and decided to practice the illicit tradition of the first night, having the miller hanged and then taking the man's wife. The woman showed up at the Dreadfort a year later with baby Ramsay; Roose had intended to have the woman whipped and the infant thrown down a well, but when he saw the child had his eyes, Roose stayed his hand and agreed to aid them- he gave the woman back the farm her husband's brother had stolen from her, had the man's tongue cut out to stop him telling tales to Rickard Stark, Roose's liege, and periodically sent the woman a few pigs, chickens and coin to help bring up the bastard child on the condition she never tell the boy who his father was. He thinks that the woman may have had a hand in turning Ramsay on to desiring goals outside the rights of a bastard. They also discuss Domeric Bolton, Roose's true-born son, whom Roose suspects was killed by Ramsay. He also suspects that any trueborn sons he has with his new wife Ramsay will likely kill, though he admits this might be best, as he believes he will not live long enough to raise new sons to manhood and considers child lords the bane of a House.

They finally arrive at Barrow Hall, where Theon is brought to Barbrey Dustin, Lady of Barrowton. He is introduced as Theon Greyjoy, true Lord of the Iron Islands, which frightens Theon into fits, having been tortured into calling himself Reek. She asks Roose if Theon has gone mad, and he replies he most likely has, but it doesn't matter. Theon claims he is not the turncloak, he died at Winterfell.