House Bolton of the Dreadfort is a noble house from the Dreadfort in the north. They are an old line descended from the First Men and dating back to the Age of Heroes. The Boltons are known for their practice of flaying their enemies.

The Bolton sigil is a red flayed man, on pale pink spotted with red blood drops.[1][2][3][4][5][6] According to George R. R. Martin, their words are "Our blades are sharp."[7] According to the Bolton servant "Reek", Lord Roose Bolton believes "a naked man has few secrets, but a flayed man has none".[8] 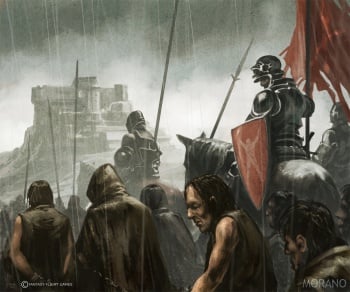 The Boltons are an ancient and powerful house of the north who once ruled as Red Kings from the Dreadfort. Their land reached from the Last River and the White Knife to the Sheepshead Hills.[9] It has been suggested that the legendary Night's King was a Bolton.[10]

Since the Long Night the Red Kings were bitter rivals of the Kings of Winter, the Starks of Winterfell. The Boltons achieved some successes against the Starks, with Kings Royce II and Royce IV burning Winterfell.[9] The Boltons are said to have flayed the skins of several Stark lords and hung them in the Dreadfort. According to rumor, some Bolton lords wore the flayed skins of their enemies—including Starks, such as the son of Bael[11]—as cloaks. This practice has given the Boltons a sinister reputation. The last Red King, Rogar the Huntsman, submitted to Winterfell when the Andal invasion of Westeros was also beginning. King Theon Stark, the Hungry Wolf, and the Boltons defeated Argos Sevenstar and his Andals in the Battle of the Weeping Water.[9]

Thousands of years ago,[N 1] the Dreadfort rose in an unsuccessful rebellion with the Greystarks of the Wolf's Den against the Starks. The Boltons survived the rebellion, although the Greystarks did not.[12]

The Chronicles of Longsister state that during the Rape of the Three Sisters by the Kings of Winter, which occurred two thousand years ago,[13] Belthasar Bolton had a Pink Pavilion made from the flayed skins of a hundred Sistermen.[14]

The Boltons threatened Winterfell during the reign of King Edrick Snowbeard.[15] At some point unspecified centuries ago, the Boltons rebelled against the Starks. The Stark armies besieged the Dreadfort for two years before the Boltons capitulated to King Harlon Stark and dipped their banners once more.[16]

"A thousand years ago",[N 2] the Boltons bent their knees to Winterfell and agreed to abandon their practice of flaying their enemies.[17] For many centuries the Boltons have remained loyal to the Starks, although rumors persist that they continue to flay their prisoners in secret and maintain a hidden chamber in the Dreadfort to display the skins of their enemies.[18]

When Lord Eddard Stark called the banners of the north to fight in Robert's Rebellion, Lord Roose Bolton took up arms, fighting in the Battle of the Trident. Afterward, he counseled that Lord Robert Baratheon should slash the throat of the legendary Kingsguard knight Ser Barristan Selmy, but Robert instead sent for his maesters to treat the wounds of Barristan the Bold.[20] 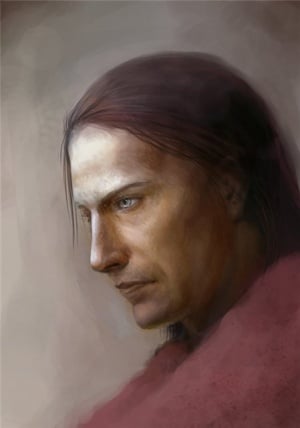 Roose Bolton, the Lord of the Dreadfort, by Sardag ©

After the arrest of Lord Eddard Stark, Warden of the North, in King's Landing, Lord Roose Bolton responds to Robb Stark's calling of the banners to Winterfell. A Bolton man knifes a Cerwyn man at the Smoking Log in the winter town outside the castle.[1] Roose and Robett Glover demand a command. When the northern host splits at the Twins, Roose receives his wish, commanding an army of mostly infantry to engage Lord Tywin Lannister.[21] Forcing a march, Roose hopes to catch Tywin unawares, but is forced to retreat at the battle on the Green Fork.[22] He reforms his army at the mouth of the causeway. Robb is able to relieve Riverrun, where he is proclaimed King in the North.[23]

Following orders from Ser Edmure Tully, Roose and Ser Helman Tallhart march on Harrenhal.[25] Bolton is able to seize the fortress by making a deal with the Brave Companions sellsword company within, and he is indirectly aided by Arya Stark and Jaqen H'ghar.[2] At Harrenhal, Roose unwittingly takes the incognito Arya as his cupbearer. He and the Freys under Ser Aenys learn of House Greyjoy's ironborn taking much of the north and of the Lannister-Tyrell victory over Stannis Baratheon in the Battle of the Blackwater. Roose orders Helman to first burn Darry and then join Robett Glover in attacking Duskendale in Robb's name.[28] 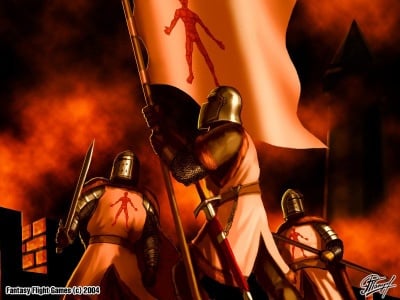 In the aftermath of the sack of Winterfell, Bolton men search the kingsroad in the north for the missing Bran and Rickon Stark.[31]

The northern army sent by Roose into the crownlands is crushed in the battle at Duskendale.[32]

When Ser Jaime Lannister is captured by the Brave Companions, Roose allows him to go on his way if he agrees to place all blame for the loss of his hand on the Brave Companions. Roose sends his captain Steelshanks Walton with 200 men to secure Jaime's passage.[26][33]

The same day that Jaime leaves Harrenhal, Roose rides north to attend the wedding of Edmure Tully, Lord of Riverrun, to Roslin Frey at the Twins. He watches as his rearguard under Ser Wylis Manderly is chewed up by Ser Gregor Clegane in the fighting at the fords of the Trident. He leaves six hundred men under the command of Ser Kyle Condon and Ronnel Stout to guard the Trident. Roose arrives at the Twins with three thousand foot and five hundred horse, most of which are Bolton or Karstark men.[34] Robb Stark, King in the North, intends for Roose to command the rearguard during his upcoming campaign against the ironborn-held Moat Cailin.[35]

Roose's actions culminate with his personal killing of Robb at the Twins in the Red Wedding, which he planned with Lame Lothar Frey with the approval of Lords Walder Frey and Tywin Lannister.[5][36] House Bolton usurps House Stark, with Roose being named the new Warden of the North by the Iron Throne. Meanwhile, Ramsay Snow is granted a royal writ of legitimacy by King Tommen I Baratheon, becoming Ramsay Bolton.[37] Ramsay has been amusing himself with the torture of the captive Theon Greyjoy.[34]

Cersei Lannister, the regent for the young Tommen, relies on House Bolton to hold the north for the Iron Throne.[38] Her small council considers aiding the Boltons against House Greyjoy, the self-styled Kings of the Isles and the North, if Roose is able to defeat Stannis Baratheon.[39]

The Boltons' authority is contested by Stannis and several northern lords, and is begrudged by nearly all others.[40][16] Lord Roose's strongest supporters are his relatives of House Dustin and House Ryswell.[41]

Roose's horse marches north along with two thousand men from the Twins. His passage is secured thanks to the forced efforts of Theon Greyjoy, whose will has been broken by Ramsay. At the siege of Moat Cailin, Theon is able to convince its ironborn garrison to surrender, and Ramsay has them flayed alive. At Barrowton in the north, Roose instructs Ramsay to behave more discreetly, and arranges the marriage of Ramsay to "Arya Stark", who is actually Jeyne Poole, in order to secure dynastic legitimacy.[42][41]

Ramsay Bolton, the Lord of the Hornwood, weds "Arya" at Winterfell in the presence of several northern lords,[43] and he claims to be the Lord of Winterfell.[44][45] The Boltons and Freys quarter in Winterfell as the autumn snows fall, awaiting the march on Winterfell by King Stannis. While there, Roose deals with high tensions between the different factions, particularly between the Freys and Lord Wyman Manderly.[46] Theon manages to escape with Jeyne, much to Ramsay's chagrin.[47]

According to a letter purportedly sent from Ramsay to Jon Snow, the Lord Commander of the Night's Watch at Castle Black, the Boltons have smashed Stannis's army.[48]

Theon tells Stannis he expects that Ramsay will be marching on the crofters' village while Roose remains safe in Winterfell.[49]

House Bolton at the end of the third century

The known Boltons during the timespan of the events described in A Song of Ice and Fire are: After Roose Bolton is raised to Warden of the North several houses swear fealty to their new overlord, not all willingly.

Who dressed the poor child in those Bolton rags? That badge ... there's many a man who would hang her in half a heartbeat for wearing a flayed man on her breast.[50]

—Ravella Smallwood to the brotherhood without banners

Every great lord has unruly bannermen who envy him his place. My father had the Reynes and the Tarbecks, the Tyrells have the Florents, Hoster Tully had Walder Frey. Only strength keeps such men in their place. The moment they smell weakness .... during the Age of Heroes, the Boltons used to flay the Starks and wear their skins as cloaks.[51]

It is not happenstance that they put a flayed man on their banners.[52]

—the Lazy Eel's proprietor to his customers

The Boltons have always been as cruel as they were cunning, but this one seems a beast in human skin.[12]

Let me bathe in Bolton blood before I die. I want to feel it spatter across my face when my axe bites deep into a Bolton skull. I want to lick it off my lips and die with the taste of it on my tongue.[53]