Their blazon is silver mailed fist on scarlet.[5][6] Their words are not mentioned in the books.

The Glovers ruled as First Men kings after the Long Night, but they were eventually reduced to vassals by the Kings of Winter from House Stark.[7]

The Glovers aided Lord Cregan Stark in hunting down the free folk raiders of Sylas the Grim.[9]

Jorah Mormont's first wife, chosen by his father Jeor, was a Glover of Deepwood Motte. They were married ten years, and she died after her third miscarriage.[10]

Ethan Glover, who was Brandon Stark's squire and went to King's Landing with him to challenge Prince Rhaegar Targaryen, was the only one of Brandon's companions to survive. Ethan later died at the tower of joy.[11] 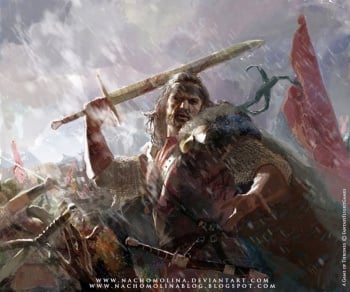 After getting indications that the Lannisters were involved in the murder attempt on Bran Stark, Lord Eddard Stark tells Catelyn Stark to send word to Ser Helman Tallhart and Galbart Glover to raise a hundred bowmen and fortify Moat Cailin.[12]

Bran recognizes the mailed fist of the Glovers, silver on scarlet, among the northern banners that answer Robb Stark's call to Winterfell. Galbart's brother, Robett, demands the honor of battle command, though with a smile and a jest.[5] The brothers greet Catelyn when she joins Robb's army at Moat Cailin.[13] When Robb splits his forces at the Twins, Galbart stays with him,[14] while Robett is assigned to the army commanded by Lord Roose Bolton.[15]

Tyrion Lannister sees the mailed fist of the Glovers on the northern army he faces in the battle on the Green Fork.[16] Catelyn notices Galbart praying with Robb at the godswood of Riverrun after the victory at the Camps.[17]

The Glovers play a part of the succession of the Hornwood lands, as they are fostering Larence Snow, the bastard of Lord Halys Hornwood. When Robett and Galbart went south with Robb Stark, they left Robett's wife, Sybelle Glover, in charge of Deepwood Motte. When the castle's steward comes to Winterfell for the harvest feast, Bran realizes it is the steward, not Lady Glover, who is making the decisions at Deepwood.[18] Glover men play bladder and woodharp during the feast.[19]

During Robb's campaign in the westerlands, Galbart and Lord Rickard Karstark raid along the coast of the Sunset Sea after the Battle of Oxcross.[20] Robett is held prisoner at Harrenhal, reportedly having been made prisoner of the Brave Companions. In fact, the northmen and sellswords conspire to take the massive castle.[15] Robett is one of the northern commanders told to strike Duskendale by Roose Bolton, reporting supposed orders from Robb, King in the North.[21]

During the ironborn invasion of the north, Asha Greyjoy holds Sybelle and her children as hostages after the taking of Deepwood Motte.[22] Theon Greyjoy notices that no Glovers are part of the army commanded by Ser Rodrik Cassel that gathers at Winterfell to expel the ironborn, due to the fact that their castle is occupied by his sister Asha.[23]

Robett Glover survives the battle at Duskendale and leads the survivors in retreat, only to meet Ser Gregor Clegane, who is waiting for them on the kingsroad.[24] King Robb exchanges prisoners with Lord Tywin Lannister, trading young Martyn Lannister for Robett, who is put on a ship at Duskendale.[25]

During Robb's trip to the Twins for Lord Edmure Tully's marriage to Roslin Frey, Galbart Glover takes Ser Brynden Tully's place as the commander of scouts and outriders. In preparation for his campaign against the ironborn-held Moat Cailin, Robb commands Lady Maege Mormont and Galbart to sail on Mallister longships through the marshes of the Neck to seek out Lord Howland Reed.[26]

Asha treats Sybelle well while she is held at Deepwood Motte. Sybelle tells Asha that Galbart would talk with her, and that the northmen would agree to exchange Deepwood Motte, Torrhen's Square, and Moat Cailin for Sea Dragon Point and the Stony Shore.[27] Asha takes Lady Glover and her children with her to Harlaw. During the voyage, Sybelle's milk dries up and they have to feed little Erena with milk from a goat found ashore. Erena is sick when they arrive at Harlaw.[28]

Brienne of Tarth spots the badge of House Glover among those that have been collected from the dead around Duskendale.[29]

Asha and her ironborn are defeated by Stannis Baratheon in the fight by Deepwood Motte.[30] Lady Sybelle Glover declares for Stannis and sends clansmen sworn to Deepwood Motte with the king during his march on Winterfell, which is held by Lord Roose Bolton, the new Warden of the North.[4]

Robett tries to gather men at White Harbor without much success.[31] He and Lord Wyman Manderly ask Lord Davos Seaworth to use his smuggler skills to retrieve Rickon Stark.[32]

House Glover at the end of the third century

The known Glovers during the timespan of the events described in A Song of Ice and Fire are:

With unspecified familiar relationship to the main branch there were also: