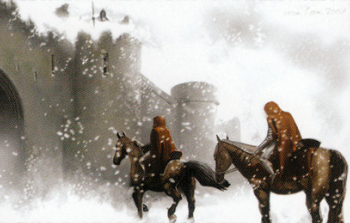 Riders at the gates of Winterfell, by Trevor Cook © Fantasy Flight Games

The march on Winterfell is the march of Stannis Baratheon's troops in the north from Deepwood Motte through the wolfswood during the War of the Five Kings in 300 AC. Their goal is to take Winterfell from Lord Roose Bolton, the newly-appointed Warden of the North.

Following the advice of Jon Snow, Lord Commander of the Night's Watch, Stannis Baratheon visits the northern mountain clans to win their loyalty. This proves successful, as three and a half thousand men from the mountain clans join Stannis's army,[N 1] bringing his total strength to five thousand.[1] Stannis marches his army to Deepwood Motte, where they engage in battle against the ironborn under the command of Asha Greyjoy.[2]

Meanwhile, Lord Roose Bolton arrives in the north with a girl he claims is Arya Stark, the youngest daughter of the late Lord Eddard Stark of Winterfell. In reality, however, the girl is Jeyne Poole, the daughter of the late steward of Winterfell, Vayon Poole.[3] Roose marries the fake Arya to his bastard son, the recently-legitimized Ramsay Bolton at Winterfell.[4] There, they remain, with forces from Houses Cerwyn, Dustin, Frey, Hornwood, Manderly, Ryswell, and Umber.

House Mormont, led by Alysane Mormont, joins Stannis.[5] While Stannis's southron knights and lords oppose a march on Winterfell, the northern lords insist that Winterfell must be taken from Roose Bolton, and Arya saved from Ramsay. As such, Stannis decides to march from Deepwood Motte to Winterfell. 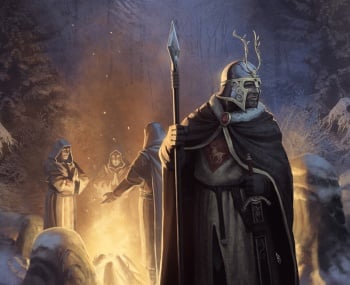 Watcher of the Nightfire, by Aurelien Hubert © Fantasy Flight Games

Stannis's army is led by guides provided by Lady Sybelle Glover. They march with five thousand men, and estimate that the hundred league march from Deepwood Motte to Winterfell will take fifteen days.[5] During the first two days they cover forty-six miles, but only manage to cover fourteen miles the third day. On the fourth day, it starts to snow, significantly slowing down the march.[5]

The northmen have an easier time during the march than the fifteen hundred southrons. Nonetheless, the harsh weather results in losses for Stannis, due to the cold, and later also starvation. Harwood Fell, Lord of Felwood, dies of a fever after falling into a frozen pond. At the fifteenth day of the march, the army has not even covered half the distance.[5] On the thirty-third day of the march, they arrive at a crofters' village a few days from Winterfell. Though Stannis plans to continue the march the next day, when daylight arrives the army finds itself snowbound.[5]

Both Mors Umber and Arnolf Karstark, the castellan of Karhold, march towards Winterfell, planning to join their strength to Stannis at the castle.[4] Arnolf already declared for Stannis before the Baratheon army left Castle Black,[6] but he is secretly loyal to Roose Bolton. He writes to Stannis, informing him that only fifty men remain at the Dreadfort, hoping to lure Stannis to the castle,[7] but his trap fails after Jon Snow counsels Stannis to not march on the seat of House Bolton.[8] Because Roose had moved to Winterfell, Stannis has no choice to summon Arnolf,[8] who eventually finds Stannis and his army at the crofters' village, where the army has been stranded there for eleven days.[9] Arnolf fakes loyalty, waiting for a signal from Roose Bolton to turn his cloak.[4]

Stannis's host cuts holes in the ice of lakes near the village, but not enough fish is found for sustenance. The body of Bryen Farring is burned on a pyre after he succumbs. In an attempt to end the storm, queen's men sacrifice to R'hllor four Peasebury men accused of cannibalism.[9] Tycho Nestoris, a Braavosi banker, arrives at the village from Deepwood with an escort of ransomed ironborn. Tycho's party is accompanied by Theon Greyjoy and "Arya Stark" (actually Jeyne Poole).[9]

Roose Bolton sends out forces from House Frey and House Manderly,[10] but Ser Aenys Frey is killed when he falls into a pit dug by Mors Umber in front of the main gates, and breaks his neck.[11] Still at the crofters' village, Stannis is warned by Tycho Nestoris about Arnolf Karstark's planned treachery. Arnolf and his family are taken into custody, while his forces are disarmed. Filled with confidence, Stannis remains at the village with his host, prepared to meet the Bolton forces for battle there.[11]

We all know what my brother would do. Robert would gallop up to the gates of Winterfell alone, break them with his warhammer, and ride through the rubble to slay Roose Bolton with his left hand and the Bastard with his right. I am not Robert. But we will march, and we will free Winterfell … or die in the attempt.[5]

Asha thought she had known cold on Pyke, when the wind came howling off the sea, but that was nothing compared to this. This is a cold that drives men mad.[5]

Corliss: You northmen brought these snows upon us. You and your demon trees. R'hllor will save us.
Artos: R'hllor will doom us.[9]