Alysane Mormont, known as Aly and the She-Bear, is a member of House Mormont. She is the second daughter of Maege Mormont, Lady of Bear Island.[5]

Alysane is short, chunky, and muscular, with big thighs, breasts, and hands. Her hands are heavily callused. She has crooked teeth, but an ingratiating smile. Her snores are reportedly worse than any man's.[6]

Aly is gruff and taciturn.[6]

Alysane wears ringmail under her furs, boiled leather under that, and sheepskin under the leather, turned inside out for warmth, even while sleeping.[6]

Alysane is in her mid-twenties and has two children, the eldest a daughter of nine and the youngest a son of two. She is unwed.[6]

Alysane is the new heir of House Mormont after the death of her elder sister, Dacey, at the Red Wedding.[7] 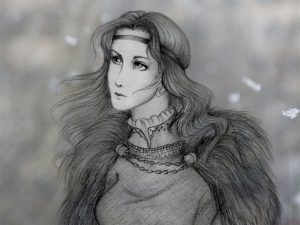 Alysane and men-at-arms of House Mormont launch a surprise attack on longships off the strand of Deepwood Motte, taking them unawares by hiding fighters inside a gaggle of fishing sloops. She burns and captures all ships, securing several ironborn captains, knights, warriors, and other nobility for ransom.[1]

After Stannis Baratheon is victorious in the fight by Deepwood Motte and restores it to House Glover, Alysane joins his army for the march on Winterfell. Aly insists that Lord Roose Bolton cannot be allowed to hold Winterfell, and that "Arya Stark" must be rescued from the Boltons. She also wants Theon Greyjoy to be killed for prior capture of Winterfell.[6] Despite their alliance, Alysane frustrates Stannis.[6] She is assigned as one of the guards of Asha Greyjoy, Theon's sister.[6]

Camped at the crofters' village west of Winterfell, Alysane and Asha go ice fishing on the frozen lakes, but after several days, they have little luck finding any fish. Alysane protects Asha when Clayton Suggs wishes to burn her as a sacrifice to R'hllor.[2]

Asha: You are wed.
Alysane: No. My children were fathered by a bear. Mormont women are skinchangers. We turn into bears and find mates in the woods. Everyone knows.
Asha: Mormont women are all fighters too.
Alysane: What we are is what you made us. On Bear Island every child learns to fear krakens rising from the sea.[6]

Alysane: My lady asked you to let her go. You would do well to listen, ser. Lady Asha is not for burning.
Clayton: She will be. We have harbored this demon worshiper amongst us too long.[2]

This southron king seemed to be one of those men to whom women are another race, as strange and unfathomable as giants and grumkins and the children of the forest. The She-Bear made him grind his teeth as well.[6]

Her proper name was Alysane of House Mormont, but she wore the other name as easily as she wore her mail.[6]

One did not provoke the She-Bear needlessly.[2]