From A Wiki of Ice and Fire
Jump to: navigation, search
This article is about the knight sworn to Stannis Baratheon. For the historical king, see Justin Massey (Milk-Eye).

Ser Justin Massey is a knight from House Massey, and a queen's man.[1]

Justin is a large man with pink cheeks, blue eyes, and a mop of thick straight hair, white blond and pale as flax.[2][3][4] The fair knight has a neatly-trimmed blond beard.[4] His tunic displays the triple spiral of House Massey.[3]

Justin, who has a pleasing manner and a ready smile, often tells jokes with a glib tongue.[2][3][4] Stannis Baratheon refers to Justin as "the smiler",[2] and Clayton Suggs considers him a "prancing fool".[5]

Justin once squired for Robert Baratheon, from whom it is said he acquired his appetite for women.[2]

Ser Justin fights alongside Stannis Baratheon at the Battle of the Blackwater. He advises the retreat to Dragonstone when the battle appears lost.[4]

Justin is among the knights who go north to the Wall with Stannis, to defend the Seven Kingdoms from the free folk army of Mance Rayder.[6]

Justin is an adviser to Stannis and sits high in his councils.[7] Sent south from Castle Black by Stannis along with Ser Richard Horpe, his departure is noted by Dywen, and Jon Snow deduces that Justin is acting as an envoy for Stannis.[7] Upon his return Justin argues with Jon about the likely length of Roose Bolton's siege of Moat Cailin, believing the ironborn will hold out for a longer period. Justin counsels Stannis to strike against the Dreadfort. and he taunts Ser Godry Farring about the basis for his nickname, Giantslayer. Stannis believes that Justin aspires to be rewarded with the lordship of Winterfell for his service, but the king plans to give the title to Arnolf Karstark. Stannis also believes that Justin hopes to marry Val. Richard Horpe is a rival to Justin in both ambitions.[2]

Stannis captures Asha Greyjoy and defeats her ironborn in the fight by Deepwood Motte.[8] Justin reluctantly follows Stannis toward Winterfell, fearing the long march and the prospect of a siege in the snow. Justin commands the baggage train and is concerned about the scarcity of provisions. He believes that Melisandre brings good fortune to Stannis and wishes that she was with the host instead of at the Wall, but he is less devout than some queen's men. He warns Asha when the others begin to talk of making a sacrifice to R'hllor to end the snowstorms that plague the march on Winterfell. Justin's baggage train suffers heavy losses with horses foundering and exhausted men sitting to die in the snow. He removes Asha's fetters on the twentieth day of the march.[3]

When Melisandre prophesies a girl coming to the Wall, Jon Snow guesses she is Arya Stark and fears that Stannis will try to marry her to Justin.[9] The girl turns out to be Alys Karstark, however, and Jon arranges her marriage to Sigorn of the Thenns.[10]

Justin is courteous to Asha, bringing her food, wine, and company. Asha thinks he wishes to marry her, claim her lands, seat her on the Seastone Chair, and rule through her as her lord and master since he has lost his own lands through supporting Stannis. Asha believes her defeat at the kingsmoot by her uncle, Euron Greyjoy, and her defeat at Deepwood by Stannis has lessened her in the eyes of the ironborn, however. She does not deflate Justin's hopes but does not see him as a strong prospect.[3]

Justin intervenes when Ser Clayton Suggs manhandles Asha and threatens to have her burned at the stake at the crofters' village. When they eat together in the longhall, Justin argues they should remain camped instead of pressing on to Winterfell. Justin leaves the dinner when Richard accuses him of cowardice and questions his faith in R'hllor.[5]

Stannis orders Ser Justin to accompany the banker Tycho Nestoris back to Braavos. Justin is to first escort "Arya Stark" safely to her brother Jon Snow at the Wall. He is to be accompanied by Alysane Mormont and the brothers of the Night's Watch who escorted Tycho south from the Wall. Once in Braavos he will use Stannis's newly-acquired wealth from the Iron Bank of Braavos to hire at least twenty thousand sellswords, plus the ships needed to bring them back across the narrow sea.[4]

Stannis tasks Justin to return with the sellswords even if he falls in battle, and to fight the war in the name of his daughter, Shireen Baratheon. Justin protests that his place is by Stannis's side if there is to be battle, but Stannis says that he is better suited as an envoy than a warrior. When Justin counsels Stannis to undertake the journey himself and raise an army like Ser Aegor Rivers did after the Redgrass Field, the angry Stannis is reminded of Justin's counsel to flee the Blackwater. Before leaving Justin appeals to Stannis for a lordship to improve his standing as an envoy, but is rebuffed. He asks Stannis to send Asha with him, still pursuing marriage with her. Stannis refuses but allows that he may be rewarded with the marriage on his return.[4] 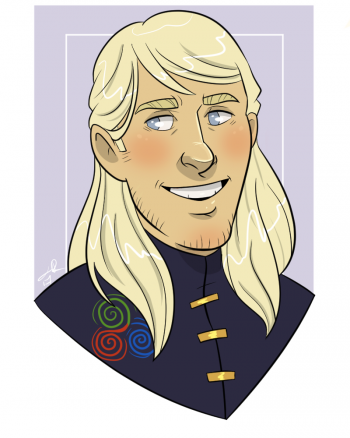 Justin: Oh, leave off, Godry. We all know what a big giant sword you have, I'm sure. No need for you to wave it in our faces yet again.
Godry: The only thing waving here is your tongue, Massey.[2]

Justin: The king has other plans for his prize captive.
Clayton: The king? Or you? Scheme all you like, Massey. She'll still be for the fire, her and her king's blood.[5]

Humfrey: If death is our fate, let us die with swords in hand.
Justin: Feel free to perish as you wish, Humfrey. Myself, I would sooner live to see another spring.[5]

Richard: Only the Lord of Light can save us now. Wouldn't you agree?
Justin: The Lord of Light, aye. My faith runs as deep as your own, Richard, you know that.
Richard: It is your courage I question, Justin, not your faith. You have preached defeat every step of the way since we rode forth from Deepwood Motte. It makes me wonder whose side you are on.[5]

Stannis: Serve me well in this matter of the sellswords, and you may have what you desire. Until such time, the woman must needs remain my captive.
Justin: I understand.
Stannis: Your understanding is not required. Only your obedience.[4]

The Crow's Eye could eat Ser Justin to break his fast and never even belch.[3]

My champion is made of suet.[5]