The Iron Bank is the main bank of Braavos. It is one of the wealthiest banks of the known world and often lends money to outsiders, such as archons, triarchs, and the Lord of the Seven Kingdoms.[1][2] The bank is famous for its discretion and secrecy.[2] A common saying among the Braavosi is "The Iron Bank will have its due."[1]

Powerful Braavosi own shares in the bank, sit on its secret councils, and have a voice in selecting the men who lead it. Keyholders proudly display ceremonial keys on formal occasions.[2] The bank's ships dock at the Purple Harbor of Braavos.[3]

Though all the Free Cities have their own banks, the Iron Bank is richer and more powerful than the others combined and has a fearsome reputation when collecting debts.[3] When princes or kings default on their debts or are foolish enough not to honor their agreements with the Iron Bank, the Iron Bank supports new princes and kings to appear. These new princes and kings then honor the previous debt along with paying back the money the bank loaned them in claiming their new power, lest they suffer the same fate as their predecessors.[3]

Maesters have learned of some the Iron Bank's history and dealings thanks to Archmaester Matthar's The Origins of the Iron Bank and Braavos. According to Matthar, the Iron Bank was founded by sixteen men and seven women who hid valuables in an abandoned iron mine shortly after the foundation of Braavos.[2] As the mine's chambers filled with treasures, a bank was formed to utilize the wealth. Each of the twenty-three founders had a key to these great subterranean vaults, and their descendants—now numbering at least one thousand—are known as "keyholders".[2]

Prior to the Uncloaking, Uthero Zalyne, Sealord of Braavos, sent envoys from the Iron Bank to negotiate with the Valyrian Freehold. The bank paid settlements to the grandchildren of the shipowners whose vessels had been seized by the fugitive founders of Braavos, but not for the slaves.[2]

In 41 AC, an envoy of the Iron Bank traveled to Oldtown to meet with Lord Martyn Hightower.[4] Rego Draz, master of coin for King Jaehaerys I Targaryen, borrowed from the Iron Bank.[5] After selling three stolen dragon eggs to the Sealord, Elissa Farman invested her gold in the Iron Bank so she could finance the building of Sun Chaser.[6] In 56 AC, an envoy of the bank visited the Red Keep to collect the annual payment of the loan and denied knowledge of Elissa's actions to King Jaehaerys. Meeting with Septon Barth, the Sealord urged the bank to forgive the principal of Rego's loan.[7]

During the Dance of the Dragons in Westeros, Ser Tyland Lannister of the greens entrusted one quarter of the crown's gold from the royal treasury to the Iron Bank for safekeeping.[8] During the regency of Aegon III, the lending of gold by Tyland to lords caused a rift between the Iron Throne of Westeros and the Iron Bank of Braavos.[9] In return for a large indemnity, the Sealord agreed with Lord Manfryd Mooton to forgive the attack on the Braavosi fleet by Lord Alyn Velaryon during the Daughters' War. Lord Unwin Peake was forced to borrow from the Iron Bank to help pay the indemnity, however.[10] The Iron Bank was temporarily eclipsed by the Rogare Bank of Lys during the Lysene Spring; some suspected Braavosi bankers of having hired Faceless Men to assassinate the brothers Lysandro and Drazenko Rogare. Moredo Rogare borrowed money from the Iron Bank and sailed for Tyrosh.[11] Lord Cregan Stark borrowed a huge sum from the Iron Bank to feed his northern people in 135 AC.[11]

Ser Michael Manwoody was an envoy of the Iron Throne to the Iron Bank during the reign of King Baelor I Targaryen.[12] Arguing with the Iron Bank in 267 AC over debts from his father, Jaehaerys II, the Mad King Aerys II considered expanding his royal fleet to challenge the Titan of Braavos.[13]

Lord Eddard Stark, the Hand of the King, learns the Iron Throne of Westeros owes a large sum of money that Petyr Baelish, the master of coin, borrowed from the Iron Bank to cover King Robert I Baratheon's spending.[14]

Bronn informs Tyrion Lannister, the acting Hand to King Joffrey I Baratheon, that a moneylender from Braavos has come to the city and requests to see the king for payment on some loans. Tyrion tells Bronn to send the moneylender to Petyr to keep him busy.[15]

Queen Regent Cersei Lannister and the small council decides to defer payments on the loans they have from the Iron Bank. Grand Maester Pycelle is the only one who objects and tries to warn her of the problems it will cause, but Cersei rejects his advice.[1]

In response to the Iron Throne's decision, the Iron Bank begins calling in outstanding debts from all over the Seven Kingdoms and refusing all new loans, causing economic chaos throughout Westeros.[16]

Noho Dimittis is sent by the Bank to the Iron Throne to collect the debt, but is told by Cersei that the Iron Bank will only get its money when the rebellion is over.[17] 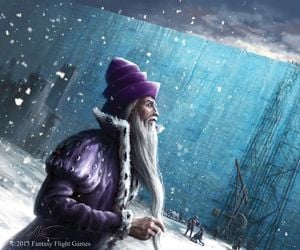 Tycho Nestoris, an envoy from the Iron Bank, arrives at the Wall via Eastwatch-by-the-Sea. The Iron Bank plans to help Stannis Baratheon's claim on the condition that he honors the debts the Iron Throne owes the bank. While present at Castle Black, Jon Snow, the new Lord Commander, makes arrangements with the envoy to borrow from the Iron Bank so the Night's Watch can buy food and supplies to see them through the approaching winter.[3]

Tycho travels to Deepwood Motte, where he pays a ransom for the ironborn which Lady Sybelle Glover accepts for the king. He travels through the snow to Winterfell looking for Stannis. Stannis is not there, but he finds Mors Umber outside the gates with some young boys. Nestoris also takes Theon Greyjoy and "Arya Stark" (Jeyne Poole), who were found by Umber after their escape from Winterfell. After three days they arrive at Stannis's camp in a crofters' village.[18]

Ser Harys Swyft, the master of coin under Lord Regent Kevan Lannister, has written to the banks of both Pentos and Myr in order to gain the crown a new loan so they can placate the Iron Bank of Braavos, but so far he has been unsuccessful. Before his death, Kevan suggests Harys travel to Braavos and treat with the bank in person.[19]

Tycho and Stannis meet and sign a contract. Ser Justin Massey is ordered to escort Tycho safely back to the Wall and from there sail to Braavos with him and use the newfound wealth of the Iron Bank to hire sellsword companies for Stannis's cause.[20]

Ser Harys Swyft travels to Braavos to parlay with the Iron Bank.[21]

Cersei: A Lannister pays his debts.
Pycelle: The Braavosi have a saying too. The Iron Bank will have its due, they say.[1]

The Iron Bank is always glad to be of service.[20]