Myr is one of the Free Cities of western Essos. It is on the east shore of the Sea of Myrth.[1]

Walled Myr is on the fertile "heel" of Essos, where an ancient Valyrian dragonroad on the mainland meets the Sea of Myrth. Temples and shrines for many gods can be found along the waterfronts and streets. R'hllor is worshiped at a red temple in Myr, for instance.[2] Myrish ships have sailed the narrow sea for hundreds of years.[3]

Some maesters believe that Myrmen are descended from the Rhoynar, as many of the Myrmen share their olive skin and dark hair, but this theory is disputed.[3] Myrmen speak a dialect[4] of bastard Valyrian,[5] and the Common Tongue, which spoken with a Myrish accent can sound sultry.[6] The mercantile port's inhabitants have no established faith.[3]

Myr is ruled by a conclave of magisters, chosen from amongst the most wealthy and noble men of the city.[3] The magisters give lavishly to passing Dothraki khals to prevent their khalasars from sacking the city.[7]

A slave city, Myr has three slaves for every freeborn. The slaves in Myr are collared and branded.[8] There are those in the city who have Unsullied in their service.[9]

The Myrmen fight often with Tyrosh and Lys over the Disputed Lands, though they will not risk the lives of their citizens in this, preferring to hire free companies instead.[3] Myrmen often use stilettos[10][11] and crossbows[12][13][14] and bravos can be found in Myr as well.[15] Myrish pirates often have nests in the Stepstones.[16] 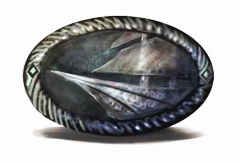 A coin of Myr, as depicted by Nutchapol Thitinunthakorn in The World of Ice & Fire

Myr is considered to be among the most advanced of the Free Cities, and is famed for its arts and learning.[18] Their main exports are finished goods, such as carpets and lace.[19] The best glass and lenses, and telescopes called Myrish eyes, come from Myr,[20][21] and lenscrafters from Myr are considered to be without equal in all the world.[3][20] Myrish lenses are known to have been used in Winterfell[22] and Castle Black.[23]

The artisans of Myr, many born as slaves, are greatly renowned. Goods from Myr include pale green nectar wine,[24][25] carpets,[26] screens,[27] blankets,[28] mirrors,[29] and lace.[30][31][28] Myrish lace and tapestries are said to be worth their weight in gold and spice.[3] The tapestries woven in Myr are more costly than those of similar quality from Qohor.[32] Myrish paintings and miniatures are regarded highly,[18] and have a vivid style.[33] Myr also produces thin stilettos[34] and fire wine.[35] Myrish fire is a healing herb[36] used to treat cuts.[37] 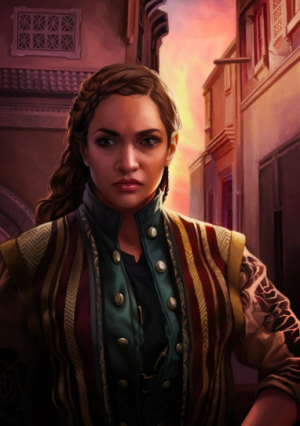 The origins of Myr are disputed. There is some evidence that a now-vanished people inhabited the area during the Dawn Age and the Long Night. Modern Myr was founded by merchant adventurers from the Valyrian Freehold after they conquered a walled Andal town.[3]

Following the Doom of Valyria, Volantis took Myr with an army and Lys with a fleet during the Century of Blood. For two generations all three cities were ruled from within the Black Walls of Volantis, but that ended when the Volantene tigers tried to conquer Tyrosh. Lys and Myr rebelled, and Pentos came into the war on the Tyroshi side. The Storm King, Argilac Durrandon, marched into the Disputed Lands and defeated a Volantene host threatening Myr. Lord Aegon Targaryen flew forth from Dragonstone on Balerion the Black Dread and burned a Volantene fleet at Lys.[4][40]

In 12 AC during the First Dornish War, the Wyl of Wyl sold Alys Oakheart and her handmaids to a Myrish slaver.[41] Myrish and Volantene builders supervised the construction of the Dragonpit during the reign of King Maegor I Targaryen.[42] Ser Howard Bullock died in Myr in 53 AC after falling from his horse.[43] Ser Orryn Baratheon joined the Maiden's Men in Myr after being forced to leave Tyrosh,[38] and Ser Borys Baratheon spent some time in Myr and Volantis before joining the Vulture King.[44] Roy Connington was stabbed to death in a Myrish gambling den.[44]

Myrish sellsails joined Morion Martell, Prince of Dorne, in the Fourth Dornish War, but King Jaehaerys I Targaryen crushed them in the Sea of Dorne.[44] During the Myrish Bloodbath of 91–92 AC, rival factions fought within the Free City. The losing faction tried to claim the Stepstones, but they were forced to flee by the Archon of Tyrosh and pirate kings. The Myrish outlaws then invaded eastern Tarth in the stormlands. After a Myrman killed Prince Aemon Targaryen, the outlaws were destroyed by Prince Baelon Targaryen, Lord Cameron Tarth, and Lord Boremund Baratheon.[44] Corlys Velaryon visited Myr during his voyages.[45]

The Triarchy and the Daughters' War

Myr combined its strength with Lys and Tyrosh and defeated Volantis in the Battle of the Borderland. They united, forming the Triarchy in 96 AC.[3][46] The Myrish prince-admiral Craghas Drahar led the Triarchy's conquest of the Stepstones. The Triarchy increased the toll in the Stepstones for passing ships, and battled for the Stepstones against the alliance of Lord Corlys Velaryon and Prince Daemon Targaryen, starting in 106 AC, continuing beyond 115 AC.[45]

During the Dance of the Dragons, the High Council of the Triarchy accepted Ser Tyland Lannister's offer of alliance with the greens, pledging to support to King Aegon II Targaryen against his half-sister, Rhaenyra. Myrish soldiers attacked Driftmark during the Battle of the Gullet, and Myrmen killed Prince Jacaerys Velaryon with their crossbows. Since most of the Triarchy's casualties during the battle were from Myrish and Tyroshi ships, the widows of those cities blamed Sharako for protecting his own Lysene ships.[47]

Black Trombo, a Myrish sellsword in the service of Lord Vance and the blacks,[48] has been suggested as the killer of Prince Daeron Targaryen during the Second Battle of Tumbleton.[49] Tyland Lannister unsuccessfully sought to hire sellswords in Myr for the greens.[50]

The Daughters' War broke out after the murder of Sharako. Although the admiral was killed in a personal dispute over the Black Swan, it was rumored that he had been assassinated by Myr. Tyrosh claimed the Stepstones when Lys and Myr began fighting, but Racallio Ryndoon claimed the islands for himself as King of the Narrow Sea. An alliance of Braavos, Lorath, and Pentos also joined the war.[51] When Tyrosh appear close to defeating Racallio, Lys and Myr made peace and attacked Tyrosh, forcing the Archon to recall his men from the Stepstones.[52] The Daughters' War eventually ended with the Disputed Lands divided between Lys, Myr, and Tyrosh, although the Myrmen suffered the greatest losses in the arrangement. Most of the Stepstones were claimed by Dorne.[53] Daughters from ancient houses of Myr attended the Maiden's Day Ball.[52] Myrish ships frequented King's Landing during the Lysene Spring.[53]

During the First Blackfyre Rebellion, Lord Bracken tried to aid the Blackfyres with Myrish crossbowmen, but was delayed from sailing by storms.[54]

While leading the Golden Company in 241 AC, Ser Aegor Rivers was killed in the Disputed Lands during a skirmish between Myr and Tyrosh.[55] In the middle of the reign of King Aerys II Targaryen, Myr sided with Tyrosh in a trade war against Volantis.[56] Smallfolk blame the Defiance of Duskendale on Serala, the Myrish wife of Lord Denys Darklyn.[57]

Varys claims to have been made a eunuch in Myr,[58] and that he lived there as a thief until a rival thief informed on him, causing him to flee to Pentos.[35] Lord Orton Merryweather, grandson of the exiled Hand of the King Owen Merryweather, returned from his exile with a Myrish wife, Taena.[59][60] Thoros, a Myrish red priest of R'hllor, was sent to King's Landing during the reign of Aerys II Targaryen, attempting to convert the king.[61] Myr was among the Free Cities visited by Viserys and Daenerys Targaryen in their years of exile.[7][62]

In the Western Market of Vaes Dothrak, Daenerys Targaryen smells garlic and roast pepper in the air and is reminded days long gone in the alleys of Myr and Tyrosh, which brings a fond smile to her face. She also see slaves carrying bolts of intricate Myrish lace.[63]

Maester Luwin uses a bronze Myrish far-eye in his tower at Winterfell.[22]

Tyrion Lannister provides King Joffrey I Baratheon with a Myrish crossbow which can fire three quarrels at once.[12] Lord [Varys]] reveals to Tyrion that he became a eunuch while he was part of a mummer's company in Myr.[58]

Stannis Baratheon hires mercenary sellswords and sellsails from Myr.[64][65] His Myrish ships are slower than war galleys of the royal fleet and have at most eighty oars.[66] During the Battle of the Blackwater, many of Stannis's Myrmen land on the southern shore of the Blackwater Rush.[67]

Daenerys sees the Myrish galley Silken Spirit in the port of Qarth.[68] 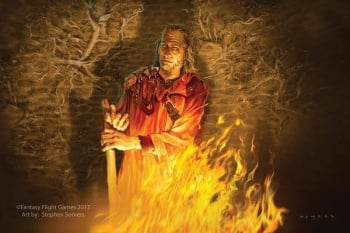 When Tyrosh and Lys are on the verge of war, they both attempt to make Myr their ally.[69]

Despite his protests that he is just a soldier, a Myrish crossbowman is hanged by the brotherhood without banners after they defeat Brave Companions at a burning septry.[14] Thoros of Myr, a red priest with the brotherhood, explains to Arya Stark that he had been sent to King's Landing in an unsuccessful attempt to convert King Robert I Baratheon.[2]

Daario Naharis of the Stormcrows wields a Myrish stiletto and a Dothraki arakh with matching hilts.[10]

Myr is on the verge of war with Tyrosh and Lys.[70] The Myrmen contract the Golden Company and are then rumored to be supporting Tyrosh against Lys,[71] but the sellswords break their contract unexpectedly[70] before hostilities begin.[72]

Lord Rodrik Harlaw sends to Myr for a lens to help him read.[73] Euron Greyjoy, King of the Isles and the North, tells his brother Victarion that he slew a Myrish wizard who was unable to hatch a dragon egg for him.[16] 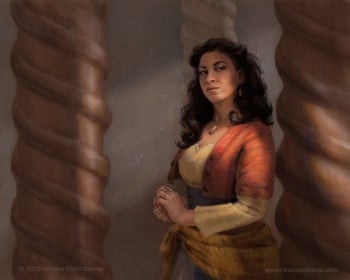 Tyrion discovers that Illyrio's manse has wine from Myr in the cellar.[25] During Young Griff's lessons with Haldon on the Shy Maid, Tyrion observes that the youth is fluent in the low dialect of Myr.[4] He also notices a wonderful Myrish carpet on the floor of a whore's bedchamber in Selhorys, but the drunken Tyrion retches onto it.[74]

At the Wall, Jon Snow, Lord Commander of the Night's Watch, considers having apprentices from Myr teach glass-blowing to the black brothers.[21]

Victarion captures a Myrish cog named Dove on her way to Yunkai by way of New Ghis with a cargo of carpets, sweet green wines, and Myrish lace. Her captain owned a Myrish eye, which makes far-off objects appear close, and Victarion claims it for himself. Victarion holds the seasoned crew for future ransom.[78]

The men of Myr are indifferent sailors and feeble soldiers; their weapons of choice are dirk, dagger, and crossbow, preferably poisoned.[44]

The lenscrafters of Myr are without equal.[20]

Sansa: A new gown?
Seamstress: More lovely than any you have worn, my lady. All silk and Myrish lace, with satin linings. You will be very beautiful.[13]

—Sansa Stark and a seamstress

The best glass came from Myr, but a good clear pane was worth its weight in spice, and green and yellow glass would not work as well. What we need is gold. With enough coin, we could buy 'prentice glassblowers and glaziers in Myr, bring them north, offer them their freedom for teaching their art to some of our recruits.[21]