Argilac Durrandon, also known as Argilac the Arrogant, was the last Storm King from House Durrandon who reigned in the stormlands before the Conquest by Aegon I Targaryen.

Argilac was a warrior king and considered to be old by the time of Aegon's Conquest.[2] 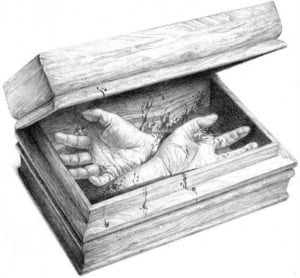 Argilac cuts off the hands of an envoy.

When he was boy, King Argilac turned back a Dornish invasion.[1] Towards the end of the Century of Blood, he joined the great alliance against the tigers from Volantis and led a host into the Disputed Lands, marching against an army from Volantis which was attempting to retake Myr.[1][3][4] Twenty years later, he killed King Garse VII Gardener of the Reach, in the Battle of Summerfield.[1]

Harren the Black, the King of the Isles and the Rivers, was nearing completion of his massive castle, Harrenhal, and was said to be looking for more conquests. Argilac had grown afraid of Harren and so proposed an alliance with Aegon. It is believed he wanted to create a buffer zone between his kingdom and Harren's. He offered the hand of his maiden daughter, Argella, in marriage as well as dowry lands, though, much of the lands were in fact in the possession of Harren the Black. Aegon refused and instead offered the hand of his best friend and rumored bastard brother, Orys Baratheon. Argilac took this as a grave insult and had the hands of the envoy cut off. He sent them to Aegon with a message of "These are the only hands you will receive". Aegon called his banners and took counsel with them and his sisters. Then Aegon sent ravens to the rulers of the Seven Kingdoms. He informed them that there would only be one king in Westeros. Those who bent the knee would keep their lands and titles, but those that did not he would destroy. King Argilac refused to submit.[1]

After landing and proclaiming himself Lord of the Seven Kingdoms, Aegon named Orys Baratheon the Hand of the King and sent him with Rhaenys to take Storm's End. Though Orys met with some setbacks, he continued to march on Storm's End. King Argilac refused to be trapped inside his castle like King Harren, so he came out to meet the invaders. He attacked Orys's forces while a huge storm raged, in what became known as the Last Storm. Argilac outnumbered Orys's army two-to-one and outflanked it, but Rhaenys and her dragon, Meraxes, stopped them. Orys came face-to-face with Argilac and slew him in single combat.[1]

In order to reward Orys, Aegon gave him Argilac's lands and the hand of the dead king's daughter. Orys kept the banner, honors and words of House Durrandon.[1][5]