From A Wiki of Ice and Fire
Jump to: navigation, search
For others with the same name, see Rhaenys Targaryen (disambiguation). For other uses, see Rhaenys.

Queen Rhaenys Targaryen was the youngest sister of King Aegon I Targaryen, the first Lord of the Seven Kingdoms. Both she and her older sister Visenya were married to Aegon, and it was said that she was Aegon's favorite. Through her son with Aegon, Aenys I, the line of the dragonkings continued, with fifteen of the sixteen Targaryen kings being direct descendants of Rhaenys and Aegon. She was a dragonrider who rode the dragon Meraxes.

Rhaenys was a beautiful woman[4] with silver-gold hair, which she kept long and wore loose, purple eyes, and a slender body.[5]

Rhaenys was kindhearted,[4] graceful, playful, curious, impulsive, and given to flights of fancy, with a mischievous aspect to her personality.[5][6] She loved music, dancing, and poetry. Rhaenys loved flying even more; it was said that she spent more time flying on her dragon, Meraxes, than her siblings did combined.[6]

Rhaenys was born on the island Dragonstone[2] to Aerion Targaryen, Lord of Dragonstone, and his wife, Lady Valaena Velaryon. She had two older siblings: Visenya and Aegon. Although according to Valyrian marriage customs Aegon was expected to marry his eldest sister, Visenya, he took both his sisters to wife. People claimed that Aegon wed Visenya out of duty and Rhaenys out of desire. Prior to her wedding, Rhaenys became a dragonrider, having bonded with the dragon Meraxes.[6] Rhaenys with her siblings Aegon (middle) and Visenya (left), by Amok

When Aegon's Conquest of the Seven Kingdoms began, Rhaenys sailed with her siblings from Dragonstone. While Aegon began construction of the Aegonfort, Rhaenys flew on Meraxes to Rosby, which yielded peacefully. After having conquered a dozen houses, Aegon was crowned king. Rhaenys, now queen, hailed him as, "Aegon, First of his Name, King of All Westeros, and Shield of His People" after Visenya placed a Valyrian steel circlet on Aegon's head.[6]

Within days of Aegon's coronation, the Targaryen armies were sent out again. Rhaenys, upon Meraxes, accompanied Orys Baratheon and the greater part of the Targaryen host on their way to Storm's End in the stormlands. As they were crossing the Wendwater, the Targaryen host came under attack by the forces of Lords Errol, Fell, and Buckler. More than a thousand men were cut down before the attackers faded back into the trees. Rhaenys answered by unleashing Meraxes upon them. As a wall of dragonflame swept through the woods, the trees turned into torches. Lord Errol died, but Lords Fell and Buckler survived to send word to Storm's End. Argilac Durrandon, the Storm King, having heard of the death of Harren Hoare, King of the Isles and the Rivers, in the burning of Harrenhal, decided to march from Storm's End to meet the Targaryen host on the field, refusing to burn in his castle as Harren had. Rhaenys, on Meraxes, witnessed how he departed from Storm's End, and returned to the Targaryen host with a report on Argilac's numbers and dispositions.[6]

A fierce storm began at the start of the battle, which became known as the Last Storm. The Durrandon host charge thrice during the battle. The third time, they were able to break through the Baratheon center, but next found themselves face to face with Rhaenys and Meraxes. The knights of Argilac's personal guard, and Dickon Morrigen and the Bastard of Blackhaven, commanding the vanguard, were engulfed in dragonflame. The warhorses fled in terror, chaos ensued, and Orys slew Argilac in single combat. With the Storm King dead, Rhaenys accompanied the host to Storm's End, and flew upon Meraxes into the castle to parley with Argilac's daughter and heir, Argella Durrandon. Although Argella refused to surrender the castle, the garrison eventually yielded both Argella and Storm's End to Orys.[6]

Rhaenys met Visenya, Aegon, and the Targaryen host at Stoney Sept, from where they raced south to face the combined hosts of the Reach and the westerlands, under the command of Loren I Lannister, King of the Rock, and Mern IX Gardener, King of the Reach. Rhaenys and her siblings fought from dragonback, setting the dry grasses and stands of wheat on the battlefield afire. With more than four thousand men dead from the fire, and tens of thousands wounded by the flames, the battle became known as the Field of Fire. Mern died in battle and Loren fled, giving the Targaryens the victory.[6]

Following Loren's surrender, the three Targaryen siblings parted ways once more, but met soon again at the banks of the Trident, where they awaited the host of Torrhen Stark, King in the North. After Torrhen bend the knee, Rhaenys parted from her siblings and traveled to Dorne. She flew over the Red Mountains of Dorne, ignoring the Dornish spearmen at the Prince's Pass, and landed at Vaith. She found the castle empty and abandoned, while only women, children, and old men remained in the town located next to the castle. Rhaenys next flew to Godsgrace, the seat of House Allyrion, and the Planky Town, but there too, the men and lords were away. Rhaenys eventually arrived at Sunspear, where only the eighty-year-old Meria Martell, Princess of Dorne, remained. Meria told Rhaenys to inform Aegon that Dorne would neither fight nor kneel, and would have no king. Rhaenys warned Meria that the Targaryens would return, and departed Sunspear, leaving Dorne the only unconquered Kingdom.[6]

Reign of the Dragon 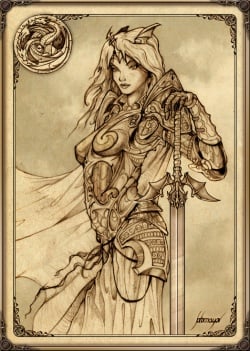 Following Aegon's coronation at Oldtown by the High Septon, Rhaenys, Aegon, and Visenya took residence at the Aegonfort in King's Landing. Aegon often left the day-to-day governance of the realm in the charge of Rhaenys and Visenya, and his councilors. She was responsible for the rule of six, established by Rhaenys while Aegon was on a progress. This law declared that only six blows were allowed to be struck by a husband to his wife as punishment for her infidelity; one blow for each of the Seven, save the Stranger. As the cause of her rule had been a husband who had struck his unfaithful wife a hundred times, causing her death, the queen declared that the man had struck his wife unlawfully ninety-four of those times, and the dead woman's brothers were allowed to punish the husband equally.[4] In addition, Rhaenys urged Aegon to make it unlawful for the ironborn to steal women throughout the Seven Kingdoms.[7]

During the early years of her brother's reign, Rhaenys often aided Aegon in his efforts to win the respect of his vassals and the smallfolk. The smallfolk were a special concern for Rhaenys. She was fond of singers and bards as well.[4] She also arranged marriages between far-flung houses.[4] Among these marriages was the marriage of the daughter of Lord Torrhen Stark to Ronnel Arryn, the Lord of the Eyrie.[8][9] However, letters can be found at the Citadel which suggest that Torrhen only agreed to this match after much protest, and that his sons, who did not agree with the Targaryen rule, had refused to attend the wedding.[8]

It was said at court that Aegon spent ten nights with Rhaenys for every night he spent with Visenya. On the nights that Aegon was not with her, Rhaenys surrounded herself with comely young men. It was rumored that she also entertained some in her bedchambers.[6] Rhaenys gave birth to Aegon's eldest son, Aenys, in 7 AC. However, Aenys was weak and sickly as a young child;[10] he cried often and refused to nurse from wet nurses, nursing only at his mother's breast. This caused rumors that he had not been fathered by Aegon, but possibly by one of the singers and mummers Rhaenys associated with.[11][10] The rumors would persist until after Rhaenys's death.

In 4 AC, Aegon I began the First Dornish War. Rhaenys led the first assault on Dorne, seizing castles and burning the Planky Town while approaching Sunspear. However, the Dornish lords once again refused to give open battle, and abandoned their seats. When Rhaenys and Aegon eventually reached Sunspear, Meria Martell, Princess of Dorne, as well as most others, had fled. Rhaenys and Aegon gathered the few courtiers and functionaries who had remained behind and, declaring themselves victorious, proclaimed that Dorne fell under the rule of the Iron Throne.

Rhaenys and Aegon returned to King's Landing, leaving Lord Jon Rosby as Sunspear's castellan while giving Lord Harlan Tyrell the charge of a host to fight the last revolts. However, they had barely reached the capital when the Dornish revolted, leading to the deaths of Jon, killed by Meria at Sunspear, and Harlan, who vanished with his army while marching to Sunspear to retake the castle in 5 AC.[12]. Entire garrisons were put to the sword, and the knights in charge were slowly tortured to death.[13]

The next few years of the war became more and more violent. The Targaryens returned to Dorne to unleash their dragons, and the Dornish responded with fire of their own. In 10 AC, at Hellholt a bolt from a scorpion pierced Meraxes through the eye. The dragon fell from the sky with Rhaenys on its back, destroying half the castle. It is not certain whether Rhaenys outlived Meraxes. There are those who say that Rhaenys lost her seat and fell to her death, while others claim that Rhaenys was crushed to death beneath Meraxes in the castle yard. A few accounts claim that Rhaenys survived the fall and died a slow death, being tortured by the Ullers. Due to the uncertainty about Rhaenys's exact death, history records that she died in 10 AC at Hellholt in Dorne. Her body was never returned to King's Landing.[13]

Rhaenys's son Aenys was three years old when she died. Always weak and sickly, the death of his mother shattered the boy, and there were doubts as to whether he would live. He even went back to crawling around as if he were a baby.[11] However, when Aenys was given the hatchling dragon Quicksilver, his condition quickly improved, and "as the dragon grew, so too did Aenys". Additionally, bonding with the dragon ended the rumors that he had not been fathered by Aegon.[10]

The two years that followed Rhaenys's death were later dubbed the years of the Dragon's Wroth. Grief-stricken at the death of their sister, Aegon and Visenya set every castle, keep, and holdfast in Dorne ablaze at least once, with the exception of Sunspear and its shadow city, and placed bounties on the heads of the Dornish lords. The war would last until 13 AC.[13]

Although a grand sept had already been constructed on Visenya's Hill in King's Landing, the Sept of Remembrance was later built on the Hill of Rhaenys as a memorial to the queen.[4]

Elissa Farman gave the names Aegon, Rhaenys, and Visenya to islands she found in the Sunset Sea.[14]

Queen Rhaenys was a Velaryon ship named after either Aegon's sister-queen Rhaenys or Princess Rhaenys Targaryen, the so-called Queen Who Never Was.[15]

The Conqueror's Two Wives is a play about the royal siblings.[16]

Meria: I will not fight you, nor will I kneel to you. Dorne has no king. Tell your brother that.


Rhaenys: I shall, but we will come again, Princess, and the next time we shall come with fire and blood.


Meria: Your words. Ours are Unbowed, Unbent, Unbroken. You may burn us, my lady ... but you will not bend us, break us, or make us bow. This is Dorne. You are not wanted here. Return at your peril.[6]
—Meria Martell and Rhaenys