In 10 AC the Dornish War took a darker turn when Rhaenys Targaryen and her dragon Meraxes were shot down by a scorpion at Hellholt. This would begin a period of indiscriminate revenges, and the war escalated to a series of castle burnings and targeted murders of nobles known as The Dragon's Wroth. After a failed attempt on the life of King Aegon, Visenya convinced him to establish a body of seven sworn bodyguards that would be named the Kingsguard.[1] 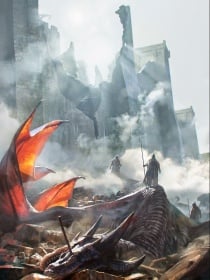