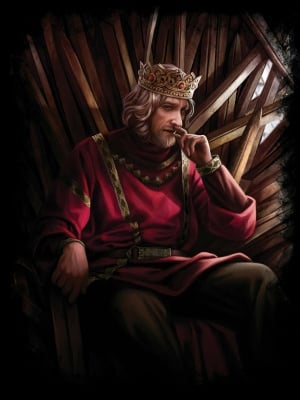 King Aenys upon the Iron Throne, as depicted by Magali Villeneuve in The World of Ice & Fire

Year 37 After the Conquest (37 AC) is a year in the Westerosi calendar, the 37th after Aegon's crowning in Oldtown that maesters and educated people use as a reference to date the years.

37 AC was the final year of Aegon the Conqueror's reign. After his death of a stroke at Dragonstone, his firstborn Aenys Targaryen was crowned. But he was perceived as a weakling and four rebels tested his determination: Harren the Red murdered Lord Gargon Qoherys and took Harrenhal, Jonos Arryn threw his brother lord Ronnel Arryn through the Moon Door, a priest king of the Iron Islands claimed to be the son of the Drowned God, and a pretender from the Red Mountains called the Vulture King raided the Dornish Marches. Those four rebellions were put down, although they costed the lives of Lord Orys Baratheon and the Hand Alyn Stokeworth. Maegor Targaryen, who had been instrumental in retaking the Eyrie, had received Blackfyre and bonded with Balerion, was named the new Hand of King Aenys.