Year 135 After the Conquest (135 AC) is a year in the Westerosi calendar, the 135th after Aegon's crowning in Oldtown that maesters and educated people use as a reference to date the years.

Early in 135 the six-year winter ended. It followed a time of hope, prosperity, and economic growth fueled by the resurgence of trade and returns paid by the Rogare Bank. Due to the growing influence of Prince Viserys's in-laws, the period came to be known as the Lysene Spring. Later in the year, the collapse of House Rogare in Lys results in the downfall of the Rogares in King's Landing and the bankruptcy of their bank. Lord Rowan is also imprisoned, accused of being complicit in their supposed treason. Refusing to deliver Larra Rogare, King Aegon and Prince Viserys are besieged for 18 days in Maegor's Holdfast until it is proven that the accusations against Lord Rowan and the Rogares had been fabricated. 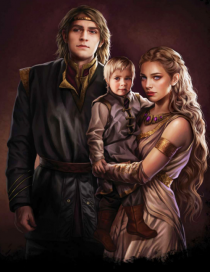 Prince Viserys, Larra Rogare and Prince Aegon, as depicted by Magali Villeneuve in The World of Ice & Fire.