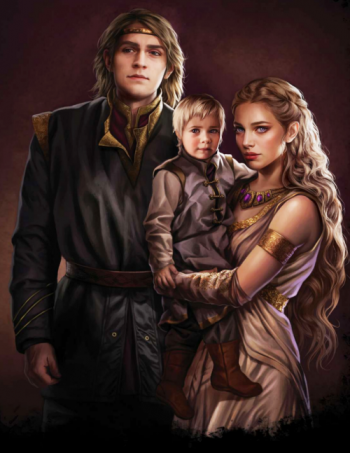 The Lysene Spring[1] or Lyseni Spring,[2] also called the Rogare Ascendency,[1] was the prosperous spring of 135 AC during the reign of King Aegon III Targaryen.

Seven-year-old Prince Viserys Targaryen was taken captive at the end of 129 AC (shortly before the Battle of the Gullet the following year) and then held captive in Lys during the Dance of the Dragons.[3]

House Rogare rose to prominence in Lys during the Daughters' War, and their patriarch, Lysandro, wed Viserys to his youngest daughter, Larra of Lys. In 134 AC after meeting with Lysandro's brother, Drazenko, in Sunspear, Lord Alyn Velaryon traveled to Lys to negotiate with Lysandro a ransom for Viserys's return to the Seven Kingdoms. Alyn agreed that the Iron Throne would pay one hundred thousand golden dragons, utilize the Rogare Bank, uphold Viserys's marriage with Larra, and grant lordships to Lysandro's youngest sons.[3]

The return of Prince Viserys Targaryen to Westeros in 134 AC delighted his elder brother, King Aegon III Targaryen, who had felt guilty since the Battle of the Gullet, and caused the court at King's Landing to rejoice. The size of the ransom outraged Lord Unwin Peake, the Hand of the King, however. Despite Unwin's objections, Aegon's regents agreed to pay the ransom in ten annual payments. They also agreed to transfer funds from the Iron Bank of Braavos to the Rogare Bank of Lysandro. Lord Peake resigned as Hand and was replaced with Lord Thaddeus Rowan.[3]

Some of Larra Rogare's brothers accompanied her to King's Landing, with Moredo leading her guards, Lotho opening a branch of the bank on Visenya's Hill, and Roggerio establishing the Mermaid, a pillow house at the River Gate. Her uncle Drazenko married Aliandra Martell, Princess of Dorne.[1]

King's Landing prospered due to the Rogare Bank and increased trade with the Free Cities of Braavos, Lys, Myr, Pentos, and Tyrosh. Other cities and towns of the Seven Kingdoms benefited as well, including Duskendale, Gulltown, Hull, Lannisport, Maidenpool, Oldtown, and White Harbor.[1]

For a time the Rogare Bank was stronger than even the Iron Bank of Braavos. The Rogare family's power helped to decrease the power of Aegon's regents.[2] The Seven Kingdoms rejoiced first at the sight of Lady Rhaena Targaryen flying atop Morning and then the birth of Prince Aegon Targaryen, the son of Viserys and Larra.[1]

The Lyseni were distrusted by some in Westeros due to their foreign customs and belief in Lysene gods instead of the Seven. Larra Rogare's guards and companions were all Lyseni. King Aegon III Targaryen and his Hand, Lord Thaddeus Rowan, were seen as ineffective at dealing with famine in the north and fighting in the Vale of Arryn and the Iron Islands. The hatching of a monster from Laena Velaryon's dragon egg was seen as a bad omen, as was the poisoning of Aegon's friend, Gaemon Palehair.[1]

Lysandro and Drazenko Rogare died a day apart from each other, with Drazenko choking on bacon and Lysandro drowning when his barge sank. Some attributed their abrupt deaths to the Faceless Men of Braavos. The deaths of the brothers led to a series of assassinations by the various magisters and merchant princes of Lys. Lysandro's eldest son, Lysaro Rogare, was an ineffective successor, and depositors began withdrawing their funds after rumors spread that the Rogare Bank was unsound. Lysaro fled Lys, but, after being caught in Volon Therys, he was returned to Lys and scourged to death. Drako reached Volantis and Marra claimed sanctuary in Lys's temple of Yndros, but their other kin lost their wealth or were sold into slavery.[1]

In Westeros, Moredo surrendered his leadership of the Iron Throne's army in the Vale of Arryn and sailed for Braavos. Lotho and Roggerio were imprisoned in the Tower of the Hand by Ser Lucas Leygood and Ser Marston Waters, respectively, and the bank's branch on Visenya's Hill was seized. Lord Rowan was arrested, as were one of his nephews and twoscore grooms, servants, and knights retainer. King Aegon and Prince Viserys refused to allow Ser Amaury Peake from entering Maegor's Holdfast and seizing Viserys's wife Larra, however. Sandoq the Shadow slew Amaury and a dozen guards, allowing the royal brothers to seek refuge in Maegor's Holdfast for eighteen days.[1]

Ser Marston, the new Hand, refused to storm the keep during the so-called secret siege. Among other confessions, Thaddeus admitted to having helped loot the Rogare Bank and thereby defrauding Westerosi noblemen, as well as conspiring with Larra and her brothers to poison Aegon with the Tears of Lys in order to place Viserys on the Iron Throne. Aegon and Viserys determined that Lord Rowan was an innocent man tortured into making false confessions, however.[1]

Lord George Graceford, the Lord Confessor, named Marston, Amaury, Ser Mervyn Flowers of the Kingsguard as conspirators, as well as Tessario the Tiger, Septon Bernard, Ser Gareth Long, Ser Victor Risley, Lucas Leygood, and six captains of the City Watch of King's Landing. Also implicated were Cassandra Baratheon, Priscella Hogg, and Lucinda Penrose, all ladies of Queen Daenaera Velaryon. Mushroom suggested that Lord Unwin Peake and his aunt, Clarice Osgrey, had orchestrated the plot against the Rogares in Westeros, although their involvement was never proven.[1]

Lucas was slain while being apprehended, and three of his captains fled the city. Marston, who claimed innocence, was mortally wounded by Mervyn, who was then overwhelmed and beaten to death. Gareth admitted that he thought Aegon III to be unworthy of being king, while Bernard was opposed to the foreign influence of the Rogares. Before dying of torture, Tessario revealed that he had wanted to replace Roggerio.[1]

Thaddeus Rowan, having been weakened by torture, was unable to remain as Hand, and he died while returning to Goldengrove.[1]

In the aftermath of the attempted coup against King Aegon III and the fall of the Rogares, nobles from throughout the Seven Kingdoms traveled to King's Landing in 136 AC, the largest gathering since the Great Council at Harrenhal in 101 AC. Willam Stackspear, Marq Merryweather, and Lorent Grandison were chosen as regents by lot, with Lord Torrhen Manderly becoming Hand, Isembard Arryn the master of coin, Gedmund Peake the master of ships, Ser Raynard Ruskyn as Lord Commander of the Kingsguard, and Ser Adrian Thorne as Commander of the City Watch.[1]

Of the forty-two people accused of plotting against Aegon and the Rogares, eight had died, sixteen had fled, thirteen confessed to some involvement, and five were put on trial after professing their innocence. Ser Gareth Long, Lord George Graceford, and several gold cloaks and Fingers agreed to join the Night's Watch, and Septon Bernard lived a life of silent penance at the Starry Sept. Ser Victor Risley was slain in a duel by Gareth after demanding trial by battle. Lucinda Penrose and Priscella Hogg joined the Faith, and Cassandra Baratheon was wed to Ser Walter Brownhill.[1]

Since the fall of the Rogare Bank had ruined thousands of nobles and tradesmen, Larra Rogare's brothers in Westeros were also punished by Lord Manderly. After having his right hand removed for theft, Lotho traveled to the Hightower and helped found the Bank of Oldtown with Samantha Tarly and Lord Lyonel Hightower. After being whipped seven times "for being a thrice-damned Lyseni", Roggerio sold his brothel in King's Landing and reestablished it on Mermaid's Daughter on the narrow sea. Moredo hired mercenaries in Braavos for a campaign against Lys.[1]

Isembard and Lord Torrhen reformed the collection of taxes, which provided some relief for those harmed by the Rogare Bank.[1] Larra remained in King's Landing, although she never felt comfortable in the city.[4] She moved back to Lys in 139 AC after giving birth to Princess Naerys and Prince Aemon Targaryen.[5]

Had Lady Larra and her brothers been Westerosi, they might have been admired and celebrated, but their foreign birth, foreign ways, and foreign gods made them objects of mistrust and suspicion instead.[1]

Spring is ever a season of hope, rebirth, and renewal, and the spring of 135 AC was no different.[1]