Year 133 After the Conquest (133 AC) is a year in the Westerosi calendar, the 133rd after Aegon's crowning in Oldtown that maesters and educated people use as a reference to date the years.

On the third day of 133 AC the Winter Fever arrived at King's Landing, killing the Protector of the Realm, the Hand of the King, a regent, and three members of the Kingsguard. The power vacuum was filled by Lord Unwin Peake, who filled all the vacancies with men loyal to him. In the ninth moon of the year Queen Jaehaera Targaryen fell (or was thrown) to her death to the moat of Maegor's Holdfast. All nubile maidens of the realm were invited at a great ball were King Aegon III would choose his a new wife. The last day of the year saw the marriage of the king to Daenaera Velaryon.[1][2] 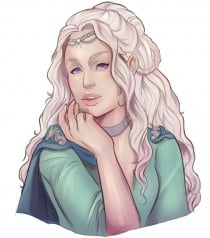