Nightsong is the seat of House Caron in the southwestern stormlands. The formidable castle[1] is located in the Dornish Marches, north of the Prince's Pass and the Red Mountains.[2][3]

Nightsong is known for its Singing Towers.[4]

Maester Yandel states the Carons have held Nightsong for many centuries and the castle guarded the western border of the domain of the Storm Kings of House Durrandon, but also that the Kingdom of the Reach once included the western marches from Horn Hill to Nightsong.[4][5] Records indicate the castle has been besieged at least thirty-seven times in the last millenium.[6]

Nightsong was burned by Lord Fowler in 10 AC during the First Dornish War. Ser Addam Hightower recovered the castle, only to find that Lord Caron and his family had been taken to Dorne as captives.[7]

The Vulture King led one of his hosts of Dornishmen to attack Nightsong and Horn Hill. He failed to capture Nightsong, however, and while marching west was defeated by Lady Ellyn Caron, Lord Harmon Dondarrion, and Lord Samwell Tarly during the Vulture Hunt.[8]

The Carons hosted King Jaehaerys I Targaryen and Queen Alysanne Targaryen at Nightsong in 54 AC.[9]

Lord Royce Caron, part of the regency of Aegon III, returned to Nightsong in 132 AC to deal with Dornish incursions.[10] 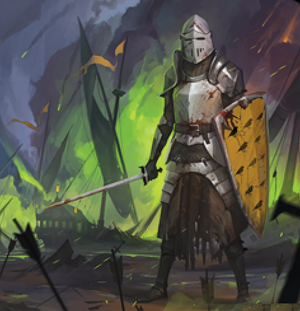 Ser Philip Foote kills Lord Bryce Caron during the Battle of the Blackwater. The Iron Throne awards Nightsong to Philip after the battle, forming House Foote of Nightsong.[11]