Ser Rolland Storm, known as the Bastard of Nightsong, is a knight of House Caron. He is the bastard son of the late Lord Bryen Caron of Nightsong and the half-brother of Lord Bryce Caron.[2]

Rolland's face is covered in scars from the pox.[3] He worships the Warrior, an aspect of the Faith of the Seven, with a faith as fierce as he is.[4] Queen Cersei Lannister considers him a seasoned killer.[5] 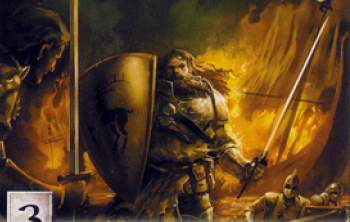 Ser Rolland joined his true born half-brother, Lord Bryce Caron, in declaring first for Renly Baratheon at the outset of the War of the Five Kings and then Stannis Baratheon after Renly's assassination at Storm's End. Rolland commanded the rearguard after the disastrous end to the Battle of the Blackwater, allowing Stannis to reach the safety of Salladhor Saan's fleet and escape to Dragonstone. Lord Bryce, however, was killed in the fighting by Ser Philip Foote.[4]

Rolland is among the king's men, those Lord Davos Seaworth seeks out who are still loyal to Stannis without being believers in the new faith.[4] He is part of Davos's plot to send Edric Storm away from Dragonstone. He is the only member who remains with Lord Davos after Edric's escape, and keeps watch over some guardsmen as Davos confronts King Stannis Baratheon and Melisandre.[3]

Once at the Wall, Stannis sends word to Rolland, the new castellan of Dragonstone, to begin mining obsidian.[6] 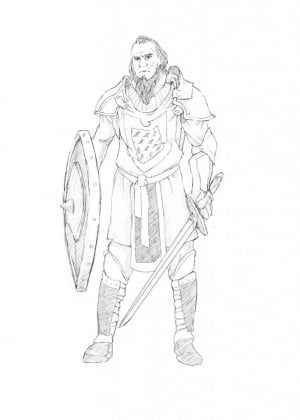 Ser Rolland commands the small garrison Stannis left to hold Dragonstone after he sailed north. Lord Paxter Redwyne is sent to besiege Dragonstone to appease the Queen Regent, Cersei Lannister, and nullify the closest threat to King's Landing. After the taking of the Shields by Euron Greyjoy, however, Ser Loras Tyrell begs to take command so that the Redwyne fleet can return to defend their homelands.[5]

Aurane Waters later reports to Cersei that upon arrival, Loras offered Rolland single combat, which was declined. The resulting assault cost more than a thousand lives and severely injured Loras, but Rolland was unable to hold the keep and Dragonstone was finally taken by the Iron Throne. Rolland's current status is unknown.[7]

After the death of Lord Bryce at the Blackwater, the Lannisters consider Rolland to be a pretender to the title "Lord of Nightsong" against their own claimant, Ser Philip Foote, the man who killed his brother.[2]

The Bastard of Nightsong had a pox-ravaged face and an air of tattered chivalry; Ser Gerald Gower was broad, bluff, and blond; Ser Andrew Estermont stood a head taller, with a spade-shaped beard and shaggy brown eye-brows. They were all good men in their own ways, Davos thought.[3]