Euron Greyjoy, known as Crow's Eye[1] and Euron Crow's Eye,[3] is a member of House Greyjoy and is the eldest of Lord Balon Greyjoy's younger brothers. In the television adaptation Game of Thrones he is portrayed by Pilou Asbæk.

Euron is captain of the Silence, a ship crewed entirely by mutes whose tongues he ripped out. Euron's personal coat-of-arms is a red eye with a black pupil beneath a black iron crown supported by two crows.[7]

Euron is pale and handsome with black hair and a dark beard. He wears a patch over his left eye, and is nicknamed Crow's Eye. According to Euron's nephew, Theon Greyjoy, the patch conceals a "black eye shining with malice".[8] His right eye is as blue as summer sky and is regarded as his "smiling eye". In addition, his lips are a pale blue, due to his propensity to drink shade of the evening.

Euron is a wildly unpredictable man, known for his delight in playing vicious mind games and waging psychological warfare on anyone around him. He is hated by his brothers for this reason. A skilled warrior and manipulator, Euron is cunning, shrewd, and ruthless.

Despite his dangerous and mercurial nature, Euron has little trouble in drawing men to his service, especially freaks and fools.[9] While most ironborn captains keep the lion's share of plunder, Euron takes almost nothing for himself.[10]

Euron owns a suit of black scale armor with various patterns, glyphs, and arcane symbols. His brother Aeron believes it to be of Valyrian steel.[10]

Euron and his two brothers, Balon and Victarion, convinced their father, Lord Quellon Greyjoy, to join Robert's Rebellion, and they raided the Reach late in the war. After Quellon was killed in a battle at the Mander, however, the new Lord Balon returned to the Iron Islands with his younger brothers.[3][11]

At the outset of Greyjoy's Rebellion, Euron concocted a plan to sail into Lannisport and burn the Lannister fleet at anchor. The Iron Fleet, commanded by Euron's brother Victarion, followed the plan and successfully destroyed the westerlands' naval force.[2]

Some time after the war, in 297 AC, Euron was sent away from the Iron Islands by Lord Balon as punishment for seducing or raping Victarion's salt wife, and he was warned never to return while Balon was alive. Victarion wanted to kill Euron and would have if not for the taboo against kinslaying.[3] Euron has several bastard children but does not have any regard for any of them. One such boy is ten years old with woolly hair and skin the color of mud.[12]

Since Euron's banishment, the Silence has sailed, pillaged, and raped all over the known world. Euron boasts to have travelled to Asshai and even sailed the Smoking Sea and walked the smoking ruins of Valyria.[13] Euron also claims to have owned a dragon egg which a Myrish wizard was unable to hatch.[12] The Crow's Eye alleges he tossed the egg into the sea during one of his foul moods.[12]

Having returned to Pyke, Theon Greyjoy notes that his uncle Euron's ship, Silence, is not in the fleet gathered at Lordsport.[14][2]

News comes to Robb Stark, King in the North, via the captain of the Myraham that Balon Greyjoy, King of the Isles and the North, fell to his death from Pyke. Euron returned to Lordsport and claimed the Seastone Chair. Lord Sawane Botley objected to his claim, however, so Euron had him drowned in a cask of seawater.[15] 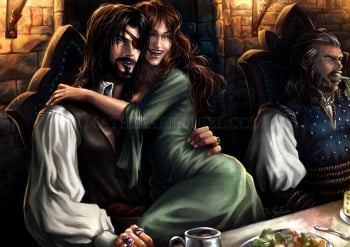 Aeron Greyjoy is informed that his brother, Euron, returned to the Iron Islands the day after Balon's death.[3] The timing of his return is questioned by some.[6] Euron brags to the ironborn to have reaved all over the world during his exile, including a trip to the feared ruins of Valyria.[13] According to a semi-canon source, he captured and holds hostage four warlocks of Qarth, including Pyat Pree,[5] and seizes their dragon horn.[16]

At the kingsmoot on Old Wyk called by Aeron, Euron promises to conquer all of Westeros for the ironborn using dragons, which he claims he can bind to his will with the dragon horn. Although Aeron considers Euron to be a godless man, he is elected king, besting his niece Asha, Victarion, and other contenders.[13] Euron has Lord Baelor Blacktyde killed when the man refuses to accept him as his king, taking Baelor's sable cloak as a trophy.[12]

Euron begins raids upon the Reach, intending to sell captives into slavery in Essos. After the taking of the Shields, Euron holds a victory's feast in Lord Hewett's castle with the tied and gagged Lord Humfrey Hewett seated next to him. The Crow's Eye forces Humfrey's daughters and granddaughters to serve food and drink to the victorious ironborn. Euron takes Humfrey's bastard daughter, Falia Flowers, as a bedmate and under her suggestion commands the noble born ladies to strip and serve his men naked.[12]

Euron weakens possible rivals by giving lands and titles to key followers of theirs. However, he fails to move the ironborn beyond raiding, as they are reluctant to embark on a dangerous journey in search of dragons after Lord Rodrik Harlaw points out all the hazards of such an endeavor. Euron sends Victarion and the Iron Fleet to find Daenerys Targaryen, court her in his name, and bring her and her dragons to Westeros.[12] 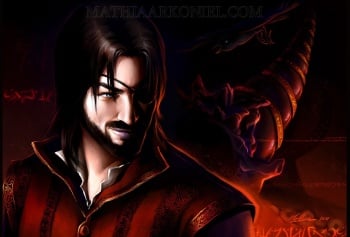 Euron Greyjoy with a dragon horn - by Mathia Arkoniel ©

Euron styles himself King of the Isles and the North.[17] He gives Victarion the dragon horn to take with him to Meereen. Victarion again remembers that "Euron's gifts are poisoned" when he hears the red priest Moqorro state that those who blow the horn die.[18]

Euron has his mutes capture Aeron Damphair after the kingsmoot, and imprisons him in the belly of the Silence. Euron admits to causing the deaths of Harlon, Robin, and Balon making him a kinslayer. He also admits he expects the followers to which he granted the Shield Islands to fail to hold them, thus ridding himself of potential enemies. Euron no longer wears his driftwood crown, but instead wears an iron crown with points made from sharks' teeth. He forces Aeron to drink shade of the evening, and the Damphair has visions of Euron on a throne of skulls and then a bloody Iron Throne, with gods impaled on its spikes. A later vision sees Euron as a kraken-like figure with tentacled face on the Iron Throne, with a shadow woman by his side.

Prior to sailing against the Redwyne fleet and the ships of House Hightower, Aeron sees Euron clad in Valyrian steel armor. Euron has Aeron and Falia, pregnant but tongueless, bound to the prow of the Silence. Euron also orders his captains to bind the priests and septons and warlocks he has kidnapped to the prows of their respective ships.[10]

Godless? Why, Aeron, I am the godliest man ever to raise sail! You serve one god, Damphair, but I have served ten thousand. From Ib to Asshai, when men see my sails, they pray.[6]

We are the ironborn, and once we were conquerors. Our writ ran everywhere the sound of the waves was heard. My brother would have you be content with the cold and dismal north, my niece with even less ... but I shall give you Lannisport. Highgarden. The Arbor. Oldtown. The riverlands and the Reach, the kingswood and the rainwood, Dorne and the marches, the Mountains of the Moon and the Vale of Arryn, Tarth and the Stepstones. I say we take it all! I say, we take Westeros.[13]

Perhaps we can fly. All of us. How will we ever know unless we leap from some tall tower? No man ever truly knows what he can do unless he dares to leap.[12]

Lord Balon's eldest brother had never given up the Old Way, even for a day. His Silence, with its black sails and dark red hull, was infamous in every port from Ibben to Asshai, it was said.[2]

He may be dead, and if he lives, why, he has spent so long at sea, he'd be half a stranger here. The ironborn would never seat a stranger in the Seastone Chair.[2]

Euron Greyjoy is no man’s notion of a king, if half of what Theon said of him was true.[15]

—Robb Stark to his bannermen

Tristifer: The Crow's Eye brought back monsters from the east ... aye, and wizards too.
Asha: Nuncle always had a fondness for freaks and fools. My father used to fight with him about it. Let the wizards call upon their gods. The Damphair will call on ours, and drown them.[9]

Balon was mad, Aeron is madder, and Euron is the maddest of them all.[12]

Tell the Crow's Eye he's afraid of kinslaying and he'll murder one of his own sons just to prove you wrong.[19]

Moqorro: Others seek Daenerys too.
Tyrion: Have you seen these others in your fires?
Moqorro: Only their shadows. One most of all. A tall and twisted thing with one black eye and ten long arms, sailing on a sea of blood.[20]