The Smoking Sea is the place where the sea flooded into the shattered remnant of the Valyrian peninsula after the Doom of Valyria.[1] Filled with volcanoes and smoking stacks of rock, it is said to boil in places and to be haunted by demons.[1] 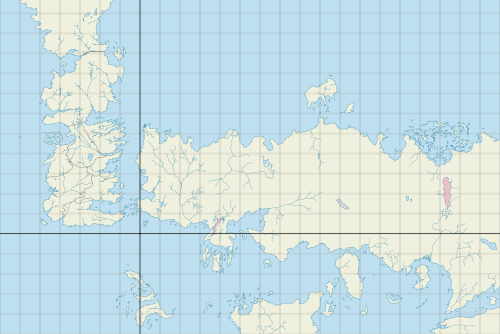 Smoking Sea
Location of the Smoking Sea in the Known world

According to semi-canon sources it was once only a strait, but with the Doom of Valyria, the peninsula was subsumed and the strait was enlarged becoming the Smoking Sea.[2] It remains a dangerous area to sail and the waters are reported to be infested with krakens.[3]

At some point the tigers, a political party in Volantis, sent a fleet to reclaim Valyria, but the ships vanished in the Smoking Sea.[4] Circa 292 AC,[N 1] Gerion Lannister went on a quest to find the ancestral sword Brightroar and any other treasures that might have survived the Doom of Valyria. Almost a decade passed after his ship the Laughing Lion left Lannisport but Gerion never returned. Lord Tywin Lannister sent men to look for his lost brother and they traced him as far as Volantis, where half his crew had deserted him because of his intent to sail into the Smoking Sea. He was forced to buy slaves to replace them.[5]

King Euron Greyjoy claims to have sailed the Smoking Sea and seen Valyria, but Lord Rodrik Harlaw is skeptical.[6]

In Meereen Daenerys Targaryen examines Xaro Xhoan Daxos's old tapestry, which was made before the Doom that took Valyria. Dany notices that there is no Smoking Sea depicted, and that Valyria is not yet an island.[7]

Aboard the Selaesori Qhoran Tyrion Lannister remembers his Uncle Gerion Lannister's quest, recalling that Gerion had bought slaves to crew his ship as his intent to sail the Smoking Sea had caused half his original crew to desert him.[8] Victarion Greyjoy remembers that, among other exploits, his brother Euron braved the Smoking Sea and lived to tell of it.[9]

No free man would willingly sign aboard a ship whose captain spoke so openly of his intent to sail into the Smoking Sea.[8]