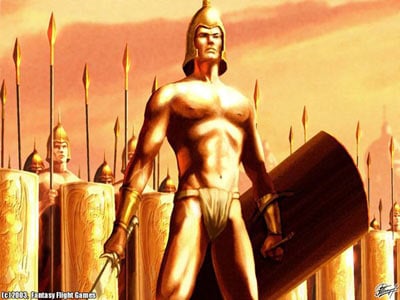 The Unsullied are eunuch slave soldiers, trained from a young age in Astapor to unquestioning obedience and martial prowess. Sold by the century or the thousand, they are used as guards all over the Free Cities. They make excellent guards, do not loot, and will never rape.[1] 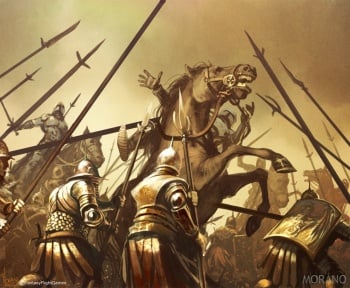 Unsullied begin as young male slaves chosen for their size, speed, and strength. Every day they choose new names at random by drawing tokens from a bucket, each consisting of a color and a type of vermin, such as "Grey Worm".[1]

Their training starts at age five and is from dawn to dusk. It is brutal, designed not only to teach them how to fight, but to strip away all individuality, empathy, and self-worth. Slaves that fail any aspect of their training are killed. Only a third of the slaves to enter training survive to become Unsullied.[1]

The eunuchs are fully castrated, with their penis and testicles cut, and their manhoods are burned at the altar of the Lady of Spears. This means that they cannot be as strong as whole men, but this is more than made up for by discipline.[1][2]

On the day a boy is cut, he is given a puppy to take care of. At the end of the first year, the boy is made to strangle the puppy. Should he fail to do so, he is killed and fed to the surviving dogs. During training boys are culled whenever they fail a task, be it running all day in full pack, scaling a mountain at night or walking across a bed of coals. To win their spiked cap they must take a silver mark go to the slave markets and buy a newborn slave child and kill it before its mother and pay the slave's owner for his loss.[1]

The Good Masters, the slavers of Astapor, used to sell Unsullied in groups of ten for household guards, but that proved unsound since they mingle with others, and forget who they are. Now they are sold only in groups of a century or thousand.[1] The only vice left for the Unsullied is food, so Unsullied serving as household guards often grow fat.[3]

The Unsullied are inspired by the lockstep legions of the Old Empire of Ghis, who were free men.[4] The Unsullied fight in formation as light infantry, equipped with short spears, swords, round shields, and distinctive spiked caps. They fight fearlessly and obey without question. Their elite, highly specialized training makes them most effective in their phalanx formation. They do not ride horses.[3]

Unsullied uniform are plain and without ornament, quilted tunic, a short sword, three spears and spiked bronze caps. One spike indicates a low rank, while three spikes going from front to back represent an officer.[5] 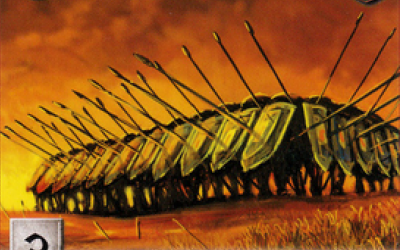 The Unsullied worship a goddess of their own whose true name is kept in secret among them. The slave soldiers refer to her to others as the Lady of Spears, the Bride of Battle, and the Mother of Hosts.[6]

The slaves regularly consume an elixir called the wine of courage to deaden their sensitivity to pain. They drink it with every meal, and every year feel less and less pain.[1][2]

The most famous Unsullied were the Three Thousand of Qohor, who held back a Dothraki khalasar over fifty thousand strong. Only six hundred Unsullied survived, having killed twelve thousand of the Dothraki. To honor the Unsullied, the surviving Dothraki rode in before the Unsullied line, throwing their cut braids down in front of them.[3] Unsullied have since made up, or at least been supported by, the city watch of Qohor.[3][7]

Lysaro Rogare bought a thousand Unsullied from Astapor in 135 AC after the death of his father, Lysandro Rogare. When Lysaro fled Lys, he surrounded himself with one hundred of the slave soldiers. Lysaro was later caught in Volon Therys with only twenty Unsullied, as he had been forced to sell the rest along the way. The twenty Unsullied fought to the end on the docks of the town and perished. Lysaro was captured and sent back to Lys in chains.[8]

During the voyage to Pentos to join up with Magister Illyrio Mopatis, Ser Jorah Mormont convinces Daenerys Targaryen to change their destination to Astapor to buy Unsullied. He tells her about the Three Thousand of Qohor, and to buy the Unsullied they could use the trade goods being carried onboard.[3]

Dany is shown Unsullied by Kraznys mo Nakloz, one of the Good Masters, in the Astapori Plaza of Pride, where ten ranks of a hundred Unsullied stand. More than half are of Dothraki stock, while others appear to be from Lys and Qarth and even the same ethnicity as their slavers, while others are from peoples she does not recognize.[1]

After Arstan Whitebeard tells Kraznys that even brave men show fear when faced with death or maiming, the slaver whips and mutilates Unsullied who do not react. Daenerys is horrified by the training regime which the Unsullied endure. Dany is told eight thousand Unsullied are available, but they are not cheap because their training takes years. Arstan tells her that slavery is held to be an abomination in Westeros, and using slave soldiers would do great dishonor to House Targaryen. Kraznys says that a corsair king was also recently interested in purchasing Unsullied.[1]

Dany later tells Kraznys through the translating slave Missandei that she wants all the Unsullied, including six centuries, the eight thousand, and those still in training. Eight slavers are hesitant to sell those in training since if they fail in battle they will shame them, and they would not have any to sell to the next buyer. Dany tells them that she will pay the same for those in training. This provokes an argument among the slavers, some liking having the gold now instead of the future, and others worried about the reputation of the Unsullied if they fail. The eldest of the slavers, Grazdan, agrees to sell Daenerys all the Unsullied for her black dragon, Drogon, her trade goods, and her ships. Dany is given Missandei as a token. Missandei tells Dany of the Unsullied's unflinching discipline, and the slave girl reveals that three were her brothers.[2] When Dany brings her whole company to the Plaza of Pride for the transaction, Kraznys advises her that her Unsullied are inexperienced. They exchange Drogon's chain and a whip with nine ends, the harpy's fingers. Daenerys, however, then has Drogon kill the slaver with dragonfire. During the ensuing fall of Astapor, the Unsullied refuse the slavers' orders to defend their masters. Dany commands the Unsullied to slay the Good Masters, their soldiers, and any man that wears a tokar or holds a whip, and to strike the chains off every slave.[2]

When Dany later arrives outside Yunkai, it is the Unsullied under Grey Worm that will attack the Yunkai'i from right and left while her horse attack the center. The battle near Yunkai is won with less than a dozen losses in part because the Stormcrows defect to Dany and the Second Sons are drunk.[9]

The Unsullied commander, Grey Worm, is among those present during planning for the siege of Meereen. Daenerys tells him she will not throw away Unsullied lives in storming the city walls. When a plan is presented to invade Meereen through the sewers, Daenerys thinks it would not make use of the Unsullied's discipline.[10] Some Unsullied are among those that invade Meereen through the sewers and free pit fighters in an uprising of slaves.[11] The Unsullied crush Meereenese resistance and punish murderers, looters, and rapers.[11]

The Qartheen master of the Indigo Star tells Daenerys that Cleon, the new king in Astapor, is training new Unsullied from the highborn boys in Astapor.[11] 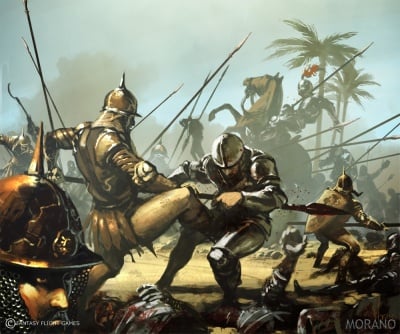 Cleon marches against Yunkai with his new Unsullied, but they are defeated in a battle at the Horns of Hazzat.[13] During the siege of Astapor, these Unsullied are butchered by the Windblown, the Company of the Cat, and a Ghiscari legion from New Ghis.[14]

Some of the Unsullied in Daenerys's service reclaim their birth names, while others choose new names. Several Unsullied, such as Stalwart Shield, are murdered in Meereen by the Sons of the Harpy.[15] The queen assigns her Unsullied to guard the city walls and her person, and directs Skahaz mo Kandaq to create a Meereenese city watch consisting of freedmen and shavepates.[16]

Grey Worm and fifty of the Unsullied aid refugees outside of Meereen's walls and help with burning the dead.[6] Hero, a captain of the Unsullied, is among the hostages sent to the Yunkish camp when Daenerys makes peace with the Yunkai'i.[17]

Daenerys disappears from Daznak's Pit on Drogon's back.[18] Her new husband, King Hizdahr zo Loraq, attempts to gain control of the Unsullied but they refuse to obey him.[19] Ser Barristan Selmy is able to convince them to follow him if Yunkai should attack Meereen.[20] 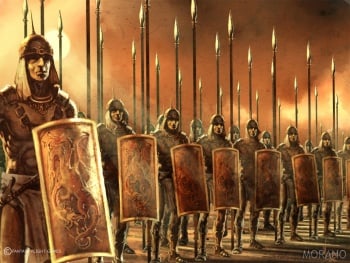 A eunuch who is cut young will never have the brute strength of one of your Westerosi knights, this is true. A bull is strong as well, but bulls die every day in the fighting pits. A girl of nine killed one not three days past in Jothiel's Pit. The Unsullied have something better than strength, tell her. They have discipline. We fight in the fashion of the Old Empire, yes. They are the lockstep legions of Old Ghis come again, absolutely obedient, absolutely loyal, and utterly without fear.[1]

This beggar queen must understand, such wonders do not come cheaply. In Yunkai and Meereen, slave swordsmen can be had for less than the price of their swords, but Unsullied are the finest foot in all the world, and each represents many years of training. Tell her they are like Valyrian steel, folded over and over and hammered for years on end, until they are stronger and more resilient than any metal on earth.[1]

Ben: Did you see them bronze heads above the gates? Rows of harpy heads with open mouths? The Meereenese can squirt boiling oil out them mouths, and cook your axemen where they stand.


Daario: Perhaps the Unsullied should wield the axes. Boiling oil feels like no more than a warm bath to you, I have heard.


Grey Worm: This is false. These ones do not feel burns as men do, yet such oil blinds and kills. The Unsullied do not fear to die, though. Give these ones rams, and we will batter down these gates or die in the attempt.[10]
—Ben Plumm, Daario Naharis, and Grey Worm

Daenerys: Do you know how Unsullied are made and trained?
Xaro: Cruelly, I have no doubt. When a smith makes a sword, he thrusts the blade into the fire, beats on it with a hammer, then plunges it into iced water to temper the steel. If you would savor the sweet taste of the fruit, you must water the tree.[13]

Archibald: We fought the Unsullied at Astapor.
Beans: I said real Unsullied. Hacking off some boy's stones with a butcher's cleaver and handing him a pointy hat don't make him Unsullied. That dragon queen's got the real item, the kind that don't break and run when you fart in their general direction.[14]

Unsullied are brave soldiers ... but not warriors. Not knights.[20]

Man to man, the Unsullied are no better or worse than any other spearmen. It's their discipline that makes them dangerous, but if they cannot form up into a spear wall ...[21]

According to George R. R. Martin, the Unsullied are partially inspired by slave legions like the Mamluks and the Janissaries.[22]