From A Wiki of Ice and Fire
Jump to: navigation, search
For the television episode, see Second Sons (TV).

The Second Sons are a sellsword company found in the Free Cities. Their banner is a broken sword[1] and they take commands only from their captain.

The Second Sons are not as well equipped as the Golden Company. While on campaign their camp is a circle of ragged tents, including a cook tent. Brown Ben Plumm’s tent has painted canvas walls cracked and faded by years of sun and rain, as well as a floor covered with threadbare carpets in half a dozen clashing colors.[2]

The Second Sons are amongst the oldest of the free companies. They do not enjoy the shining reputation of the Golden Company, but they have won some famous victories. Four hundred years ago the Second Sons stood in defense of Qohor along with the Bright Banners company against the first Dothraki khalasar to venture east since the Doom of Valyria. However, they suffered a defeat and fled the battlefield, though the battle was later won by the Three Thousand of Qohor.[3]

The names of every man to serve with the Second Sons is written in a leather-bound book, as well as when they joined, where they fought, how long they served, and the manner of their deaths. A tradition of the company is to sign in red ink. There was a time when each new man wrote his name in his own blood, but that tradition faded as blood makes poor ink.[4] Famous past members include:

Under the command of Mero, whose evil reputation is known even in Westeros, the Second Sons turned near as bad as the Brave Companions. Mero's reputation has fallen to the point where none of the Free Cities will hire him any longer.[1] They have fought in the Disputed Lands.[6]

The Second Sons are employed by Yunkai to defend them against the threat of Daenerys Targaryen. They are placed on the left of the defensive line that faces Daenerys's army. They are commanded by Mero, known as the Titan's Bastard. Mero attends the parley with Daenerys and decides to mull her offer of switching sides or departing only on the condition that she give him a wagon of wine. While the Seconds Sons are getting drunk on it that night, Daenerys sends her forces on the attack. The Second Sons are routed in the battle near Yunkai and Mero flees before he can be captured.[1]

The remaining Second Sons vote Brown Ben Plumm as their new commander and they join Daenerys's army. Mero hides among the freedmen and attempts to assassinate Daenerys, but his attempt is thwarted by Barristan Selmy and Mero is killed by an enraged mob of freedmen.[8] 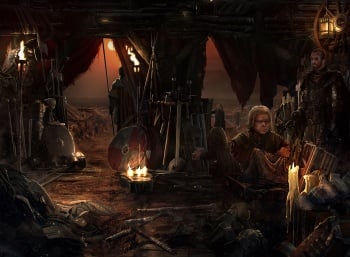 Daenerys sends the Second Sons south of Meereen to guard against any incursions by Yunkai.[9] However, when Brown Ben learns that Daenerys cannot control her dragons anymore, he has his company go over to the Yunkai'i.[10][11]

Escaped slaves Tyrion Lannister and Ser Jorah Mormont join the Second Sons, accompanied by fellow escaped slave Penny. The company is on their fourth book, which Tyrion signs in blood.[4]

Part of Tyrion's negotiations with Brown Ben for becoming a Second Son include becoming indebted to them. Just prior to signing their book Tyrion is handed a pile of roughly fifty to sixty promissory notes to sign. Tyrion remarks that only one in ten Second Sons receives a promissory note. He signs each note Tyrion of House Lannister and passes them one at a time to Tybero Istarion, called Inkpots, who dusts each one with fine sand.[4]

The promissory notes for the serjeants promise to pay the bearer of the note one hundred golden dragons, while higher-ranked officers are to be paid one thousand gold dragons. The last three notes are made out by name to:

Tyrion observes the company steel is worse than what he fought in at the battle on the Green Fork. Jorah states there is some sound steel in there, none of it is pretty, but it will stop a sword.[4] Some of the armor in the wayns are what sellswords were wearing when they died and some of it is made to fit boys.[4]

With the additions of Tyrion and Jorah they number five hundred fourteen members. Jorah joins up as a fighter while Tyrion is assigned to Inkpots to help keep the books, count coin, and write contracts and letters. When Tyrion makes a jape about supervising camp followers this does not please Brown Ben, who tells Tyrion to stay away from the whores. He wants Tyrion to remain hidden within the camp until Meereen is taken and they are on their way to Westeros.[4]

The Second Sons are ordered by Malazza, the Girl General, to defend the Wicked Sister during the second siege of Meereen. A Yunkish messenger comes to the tent to inform them that Morghaz zo Zherzyn, supreme commander of the Yunkai'i, wants them to defend the Harpy's Daughter instead, as the Unsullied are advancing toward the trebuchet while Bloodbeard and two Ghiscari legions stand against them. The Second Sons are informed that Gorzhak zo Eraz has been slain, cut down by the Tattered Prince, meaning that the Windblown have gone over to Daenerys. When the messenger recognizes Tyrion as an escaped slave and demands he be turned over, Jorah kills the messenger. Brown Ben then announces that the Second Sons have always been the queen's men and that rejoining the Yunkai'i was just a plot.[12]

I was born a second son. This company is my destiny.[2]

I have signed their book. The old way, in blood. I am now a Second Son.[4]

Tyrion: In Westeros, the word of a Lannister is considered good as gold.
Tybero: This is not Westeros. On this side of the narrow sea, we put our promises on paper. Debts written on the wind tend to be ... forgotten, shall we say?[4]

If ever he went back to Westeros to claim his birthright, he would have all the gold of Casterly Rock to make good on his promises. If not, well, he'd be dead, and his new brothers could wipe their arses with these parchments.[4]