The Golden Company is a company of sellswords founded by Ser Aegor Rivers, a Great Bastard known as "Bittersteel". The current captain-general is Harry Strickland.[5]

The Golden Company is considered the finest[6] and most powerful company of the Free Cities, with some considering them the most honorable.[7] Despite the notorious unreliability of sellswords, the Golden Company is reputed to have never broken a contract.[2] Their motto is "Our word is good as gold",[2] while their war cry, "Beneath the gold, the bitter steel", pays homage to their founder.[3] 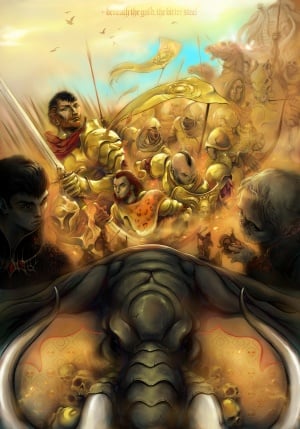 The Golden Company - by Urukki Saki ©

The men of the Golden Company prefer to call themselves a free brotherhood of exiles, rather than sellswords.[1] Unlike most hosts of household knights and feudal levies, the Golden Company are highly disciplined soldiers able to quickly establish orderly camps.[5][8]

The high officers display a rude splendor. Like many in their trade they keep their worldly wealth upon their person, including jewelled swords, inlaid armor, heavy torcs, and fine silks. Many wear a lord's ransom in golden arm rings, with each ring signifying one year's service with the Golden Company.[5]

The captain-general's tent, made of cloth-of-gold, is surrounded by a ring of pikes topped with the gilded skulls of previous captains-general.[5]

While the core of the Golden Company is still made up of descendants of men who fought for the Blackfyres, over the past century a steady trickle of outlaws or men from the losing side of other wars has joined their ranks. It has also been joined by other sellswords simply seeking better opportunities whose ancestors were never from Westeros, so that soldiers from a dozen different lands can now be found in the Golden Company. This trend has only increased since the fifth and last Blackfyre Rebellion, over 40 years ago. In the present day, even several of the high-ranking officers do not descend from Blackfyre supporters (including the paymaster, spymaster, and commander of the company's archers), though all of the known captains-general are descended from Blackfyre loyalists. 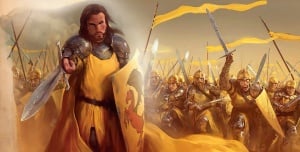 The Golden Company was founded by Ser Aegor Rivers, called "Bittersteel", a legitimized bastard of King Aegon IV Targaryen. Aegor had fled Westeros with the younger sons of Daemon I Blackfyre at the end of the First Blackfyre Rebellion. When Bittersteel saw the support of House Blackfyre ebb away as exiled lords and knights signed on with sellsword companies, such as the Ragged Standard or the Maiden's Men, he decided to create his own sellsword company in 212 AC in order to bind the exiles together.[6][4]

The Golden Company's reputation was quickly established when Qohor refused to honor the contract it had made. The sellswords sacked Qohor as an answer to the Free City's refusal.[9] The Golden Company has mainly fought in the Disputed Lands for Lys, Myr, or Tyrosh.[6]

When Daenerys Targaryen was a little girl, her brother Viserys once feasted the captains of the Golden Company in the hopes they might take up his cause to reclaim the Iron Throne from King Robert I Baratheon. They ate his food and heard his pleas and laughed at him.[16] Lord Jon Connington, exiled from Westeros during Robert's Rebellion, served five years with the Golden Company,[5] but he is said to have drank himself to death.[17]

The Golden Company is said to now be made up of exiles and the sons of exiles.[6] Some have been born into the company, but still consider themselves Westerosi.[1] 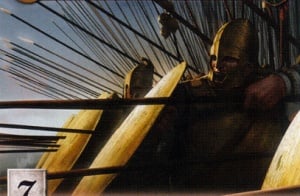 The Golden Company, by Even Mehl Amundsen © Fantasy Flight Games

The Golden Company breaks its contract with the Free City of Myr, despite looming war with neighboring Lys and Tyrosh. According to sailors in King's Landing, they are making for Volantis.[18]

In Dorne, Princess Arianne Martell tells Ser Arys Oakheart that the Golden Company has broken its contract with Myr. She uses this information in her attempt to convince him to help with her scheme to crown Princess Myrcella Baratheon as Queen of the Andals, the Rhoynar, and the First Men.[2]

During Queen Regent Cersei Lannister's small council meeting, Aurane Waters reveals that the Golden Company has broken its contract with Myr. He has heard many men say that Stannis Baratheon has hired them and is bringing them across the narrow sea. Cersei then tells the council that Qyburn heard from a Myrish galley that the Golden Company are making their way to Volantis, so if they mean to cross to Westeros they are marching the wrong way.[18] 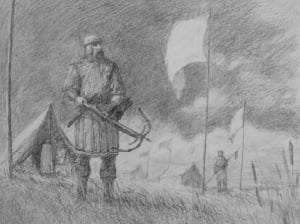 Before the Golden Company broke their contract, the Yunkish attempted to contract the Golden Company for their campaign on Slaver's Bay. An envoy offered twice what Myr was paying them, plus a slave for every man in the company, ten for every officer, and a hundred choice maidens for the commander, Harry Strickland. Harry told the envoy he would think on his proposal; he thought a blunt refusal might have been unwise as his men would think he had taken leave of his wits.[5]

While traveling on Valyrian roads to Ghoyan Drohe, Tyrion Lannister learns from Illyrio Mopatis that the Golden Company is marching to Volantis to join with Daenerys Targaryen, Queen of Meereen.[6] The exiled Lord Jon Connington, now calling himself "Griff", recalls secret plans with the previous captain-general, Ser Myles Toyne. They plotted with Illyrio to eventually have "Young Griff", whom they claim is Prince Aegon Targaryen, marry Daenerys and claim the Iron Throne. Jon is unsure if Myles's successor, Homeless Harry, is aware of the plan.[5]

The Golden Company encamps south of Volon Therys after Triarch Malaquo Maegyr closes the delta road to Volantis.[5] The men of the company are frustrated by Illyrio's constantly changing plans when they learn that the unaware Daenerys has stayed in Meereen. They decide to swear allegiance to Aegon VI Targaryen and join him in an invasion of Westeros.[5]

The company sails with Jon and Aegon from Volon Therys for Westeros, but the Volantene fleet transporting them is scattered by a storm after leaving Lys. During the landing of the Golden Company in the stormlands and the Stepstones, the sellswords quickly take the castles of Griffin's Roost, Rain House, Crow's Nest, and Greenstone. Their next plan is to take Storm's End,[19] which is held by Ser Gilbert Farring for Stannis Baratheon.[20]

Chain and Young John Mudd hold Mistwood for the Golden Company. They keep Lady Mary Mertyns under house arrest and host Princess Arianne Martell's party for a night. Chain tells Arianne many stories about the company and its members, including that of Little Pussy and his lucky cat, as well as the time someone made off with Harry Strickland's favorite elephant. At Griffin's Roost, Haldon Halfmaester informs Arianne that the Golden Company has taken Storm's End and that the Hand awaits her there. He tells her that Lord Mace Tyrell's army is descending on the castle from King's Landing and that she will want to be safe inside the walls before the battle.[1]

A pike with gilded skulls, by Scafloc

The Golden Company consist of ten thousand men. These include five hundred knights, each with three horses, and a similar number of squires, each having one horse.[5] The company has two dozen elephants,[5] the pride of Harry Strickland.[19]

Black Balaq commands a thousand bows, with a third using crossbows and another third wielding double-curved horn-and-sinew bows common to Essos. The archers with Westerosi blood use big yew longbows, while fifty Summer Islanders use great bows of famed goldenheart.[19]

A brotherhood of exiles and the sons of exiles, united by the dream of Bittersteel. It's home they want, as much as gold.[2]

Tyrion: How did you convince the Golden Company to take up the cause of our sweet queen when they have spent so much of their history fighting against the Targaryens?
Illyrio: Black or red, a dragon is still a dragon. When Maelys the Monstrous died upon the Stepstones, it was the end of the male line of House Blackfyre. And Daenerys will give the exiles what Bittersteel and the Blackfyres never could. She will take them home.[6]

Ghosts and liars. Revenants from forgotten wars, lost causes, failed rebellions, a brotherhood of the failed and the fallen, the disgraced and the disinherited. This is my army. This is our best hope.[5]

Lysono: The first Aegon took Westeros without eunuchs. Why shouldn't the sixth Aegon do the same?


Tristan: Which plan? ... The fat man's plan? The one that changes every time the moon turns? First Viserys Targaryen was to join us with fifty thousand Dothraki screamers at his back. Then the Beggar King was dead, and it was to be his sister, a pliable young child queen who was on her way to Pentos with three new-hatched dragons. Instead the girl turns up on Slaver's Bay and leaves a string of burning cities in her wake, and the fat man decides we should meet her by Volantis. Now that plan is in ruins as well. I have had enough of Illyrio's plans. Robert Baratheon won the Iron Throne without the benefit of dragons. We can do the same.[5]
—Lysono Maar, Harry Strickland, and Tristan Rivers

These were the heirs of Bittersteel, and discipline was mother's milk to them.[19]