A wagon is a heavy four-wheeled vehicle pulled by draught animals. It is used for transporting goods, commodities, agricultural materials, supplies and sometimes people. A wayn is a type of wagon pulled by horses or oxen and used for agricultural purposes.[N 1]

Due to their heavy weight, wagons and wheelhouses are a lot slower than riders.[1]

Ironmongers sell blades and razors from their wagons in the Street of Steel in King's Landing.[2]

Two wagons can pass abreast on the stone bridge of the Twins,[3] and three on the Valyrian roads in Essos.[4]

During his conquest, Aegon the Conqueror ordered that the swords of his enemies be brought by wagons to the Aegonfort. Aegon later used the swords to build the Iron Throne.[5]

In 43 AC, Prince Aegon the Uncrowned and his sister-wife, Princess Rhaena Targaryen, infiltrated King's Landing incognito using a wagon pulled by mules. They left the city on dragonback, however.[6]

The Hand of the King, Lord Torrhen Manderly, organized a great royal progress to mark the coming of age of King Aegon III Targaryen. Among the preparations he ordered the royal wagons and wheelhouses to be repaired and repainted. Aegon cancelled the progress, however.[7]

After the shipwreck of Windproud in 278 AC, Jommy was one of the men sent to reclaim the corpses that washed up on the shore. He grabbed Patchface to put him into a burial wagon with the others corpses, but the boy spat up water and sat up. In the end Patchface was the only survivor of the shipwreck.[8]

Arya Stark likes to ride along wagons and talk to people during her journey from Winterfell to King's Landing. On her way to the capital, Arya befriends Mycah, a butcher's son who sleeps in the meat wagon.[9]

After the arrest of Lord Eddard Stark, the Red cloaks are looking for his daughter Arya. She spies on some of them searching wagons and carriages at the King's Gate.[10]

Lord Leo Lefford is in charge of the wagons in the westermen army led by Lord Tywin Lannister.[11] 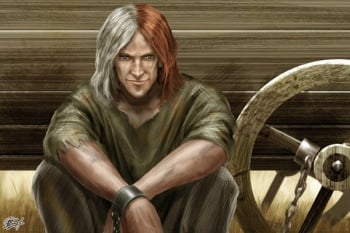 Jaqen chained to the wagon - by Amok ©

Yoren and his recruits leave King's Landing with five wagons laden with supplies for the Wall.[12] Jaqen H'ghar, Rorge and Biter are judged too dangerous by Yoren, and are kept chained at the back of a wagon.[13]

During the storming of an holdfast Yoren's group stayed at by Ser Amory Lorch, Arya frees Jaqen, Rorge and Biter from their chains.[14]

During his tenure as master of coin, Lord Petyr Baelish bought wagons with the royal treasury amongst other things.[15]

Ser Gregor Clegane brings back nine wagons of salt fish to Harrenhal after his foraging of the riverlands.[16]

Silent sisters wrap the corpse of Lord Medger Cerwyn in a cloak of silk decorated with the battle-axe of House Cerwyn, and load him into their wagon. Arya Stark sees them leave Harrenhal, presumably to return him home.[17]

Daenerys Targaryen parleys with Mero, the Commander of the Second Sons, outside of Yunkai. After they trade insults, Daenerys gives a wagon full of wine.[18]

Lord Walder Frey provides wagons of wine, ale, and mead to the common soldiers of Robb Stark's army on the occasion of the wedding of his daughter, Roslin, to Lord Edmure Tully. Walder's generous gifts have the purpose of inebriate the Starks soldiers to facilitate his planned betrayal.[19]

Ser Shadrich is hired by the merchant Hibald to protect his wagon of goods from King's Landing to Duskendale.[20]

The corpse of Lord Tywin Lannister leaves the capital in a tall wagon draped with crimson banners, with six silent sisters riding attendance on his bones and an honor guard of fifty knights.[21]

Victarion Greyjoy is disgusted when he sees survivors of the attack on Lord Hewett's Town putting the slain on burial wagons, as he considers men should not be buried in the ground but rather drowned in the sea.[22]

Samwell Tarly plans on hiring a wagon and some horses to take Gilly and her son (in reality Mance and Dalla's son) to the safety of Horn Hill.[23]

The wayns and wagons of the baggage train of Stannis Baratheon's army have difficulty to keep up the pace of the march on Winterfell.[24]

Dolorous Edd makes the journey between Long Barrow and Castle Black with six wagons to transport spearwives to their new home.[25]

Nail admits Tyrion Lannister and Penny to the wagons at the forge when they arrive to pick out some company steel after signing with the Second Sons. Ser Jorah Mormont chooses a new armor too.[26]