Gilly is a wildling girl, the daughter and youngest wife of Craster. She has a son fathered by Craster. In the television adaptation Game of Thrones she is portrayed by Hannah Murray.

Gilly has a pale, gaunt face,[3][4] dark hair, and big brown doe-eyes.[5][6] Even after giving birth, Gilly retains a slim figure.[6] She is regarded as pretty.[6] According to Jon Snow, Gilly is somewhat childlike in appearance.[7] She smells of milk, garlic and musty old fur.[3] She has a soft and shy voice.[8] After leaving Craster's Keep, Gilly frequently dresses in Samwell's old black cloak.[6]

Samwell Tarly considers Gilly to be "good and kind".[8] Having been raised by the abusive Craster and not having known any other men for a long time, Gilly is far more comfortable around other women.[9]

According to Samwell, Gilly is "very brave", able to keep going no matter the obstacles on the way.[3] He believes she has more courage than she knows herself,[6] and claims Gilly is stronger than she looks.[8]

She dislikes being called a "lady", claiming she is "Craster's wife and Craster's daughter, and a mother" instead.[6]

Gilly was born to Craster and one of his many wives. She was named for the gillyflower.[1][4][N 1]

Gilly's mother raised her to be honest, and beat the lying out of her when she was still very young.[10] She lived the first decade and a half of her life without seeing anything other than Craster's Keep and the woods around it, never going further than half a league away.[11][12] Although familiar with streams and rivers, she never saw a lake.[11]

When Gilly was old enough, at some point during the summer, she married her father. On the day of their wedding, they drank the sweetest mead.[3] At some point after the wedding, Gilly became pregnant with Craster's child.[1] By 299 AC, Gilly is Craster's youngest wife.[13] 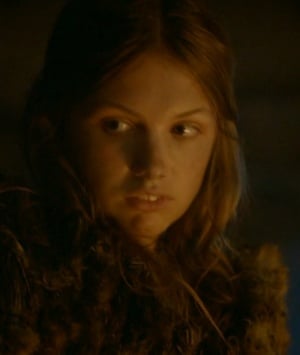 Hannah Murray as Gilly at Craster's Keep (Game of Thrones)

When the Night's Watch stops at Craster's Keep on Jeor Mormont's ranging, she encounters and befriends Samwell Tarly. She is pregnant with Craster's child, and fears that if she gives birth to a son, Craster will sacrifice him to the Others. She beseeches Samwell to help her, and Samwell agrees, sending her to Jon Snow, to the annoyance of the latter.[1]

After the attack on the Fist of the First Men, as the survivors of the Night's Watch march to Craster's Keep to regroup, Gilly gives birth to a son.[10] Craster is killed by a group of mutineers before he can sacrifice the child, and in the confusion Gilly flees south with Samwell.[10] At some point, Gilly and Samwell take shelter in a wildling village, where they are attacked by wights while staying in the village's longhall. Gilly flees outside with her child while Samwell holds off the undead Small Paul, but there she is cornered against a weirwood tree by other wights.[N 2] Gilly, her son, and Samwell are saved by Coldhands,[3] who takes them to the Nightfort.[4] There, Gilly, the babe, and Samwell cross the Wall through the Black Gate. At the Nightfort, they encounter Bran Stark, Jojen and Meera Reed, Hodor, and Summer, who they sent to Coldhands.[4] From the Nightfort, they walk to Deep Lake and Queensgate on the narrow track running between the castles on the south side of the Wall. A day and a half from Castle Black, they are found by Ser Denys Mallister from the Shadow Tower and his riders.[8] After arriving at Castle Black, Gilly serves as a wet nurse to the son of Mance Rayder[8] since Dalla, Mance's wife, has died in childbirth.[14][8]

Samwell suggests to Jon Snow that he could write a letter to his father claiming that Gilly's child is his own, with the intention of finding Gilly and her boy a safe place at Horn Hill, his father's castle.[8] 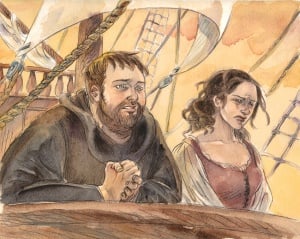 Samwell Tarly and Gilly traveling to Oldtown, by cabepfir

Gilly is called before Jon Snow, now the Lord Commander of the Night's Watch, who tells her that she is to leave Castle Black and take Mance Rayder's child with her, leaving her own behind at Castle Black. Gilly insists on taking both children, but Jon refuses to allow it. He threatens her, telling her that if she refuses to take Dalla's boy, the day Melisandre gives him to the flames, her own son will die as well.[7] Gilly leaves Jon's chambers in tears.[6] Jon later tells Samwell Tarly that he is sending Gilly and her son away, and that Samwell is to accompany them, together with Dareon and Maester Aemon, to Oldtown. As Gilly departs the next morning, he swears to her that he will find a wet nurse for her child, and promises not to name the boy until he reaches the age of two as per wildling tradition.[6] Gilly and her companions board the Blackbird at Eastwatch-by-the-sea, bound for Braavos. For much of the journey Gilly is overcome with grief at being separated from her child.[11][12] Although he is blind, Maester Aemon is the only one to realize that Gilly's tears are not out of fear of the journey, but out of grief of losing her child, and horrifies Samwell with the revelation.[11] At Braavos, Gilly once gets lost while trying to find water at one of the public fountains of the city, being frightened by her surroundings and the strangers in the city. Samwell eventually finds her weeping beneath the statue of a long-dead Sealord.[12]

Gilly, Samwell, Aemon, and the babe eventually board the Cinnamon Wind and leave Braavos. During this part of the journey Gilly starts to give her grief a place,[9] and comes to love Dalla's child as much as she loves her own.[15] Aemon dies during their journey; the night before his death, he asks Gilly if he can hold the babe and she complies, although she is afraid the old man will drop the child. She is present on deck with Samwell during Aemon's funeral service, and when Samwell comments on Jon's decision to send the ancient maester on a journey by sea, Gilly tells him that Aemon's king's blood endangered his safety at Castle Black, and that Jon had send both Aemon and Dalla's babe away to save them.[9] She also says they could name Dalla's baby after Aemon, once he reaches two years old. Gilly later sleeps with a grieving Samwell, who is deeply regretful as he is sworn to the vows of the Night's Watch. When he tells her that he swore vows before a heart tree, Gilly tells him that there are no trees on the water to watch at what they do.[9]

Upon their arrival at Oldtown, Samwell announces his intention to arrange horses and a wagon for Gilly to travel to Horn Hill, Samwell's childhood home.[15] Samwell first travels to the Citadel, however, and Gilly awaits his return upon the Cinnamon Wind.[15]