This chapter covers the events of Chapter 5 of A Feast for Crows, but from Jon's perspective rather than Samwell Tarly's.

Jon summons Gilly and, despite his own misgivings, forces her to give up her own child and take Mance Rayder's baby away with her, disguised as her own. Gilly is distraught, but Jon tells her that Melisandre will burn the child for the purposes of a spell, as Mance was King-Beyond-The-Wall and the blood of kings has magical powers. Jon warns her that if Mance's son is burned her own will die as well. She leaves wordlessly.

Soon after, Sam arrives. After a brief discussion regarding what they know of the Others and how to stop such monsters, Jon breaks the news that he is sending Sam to the Citadel so he can train to become a maester and replace Maester Aemon. Sam will travel by sea from Eastwatch, along with Gilly, the baby, and Maester Aemon. Sam leaves him, distraught, while Jon remembers something Maester Aemon told him when he became Lord Commander of the Night's Watch:

You will have little joy of your command, but I think you have the strength in you to do the things that must be done. Kill the boy, Jon Snow. Winter is almost upon us. Kill the boy and let the man be born.

Jon makes his inspection of Castle Black, during which he hears a report from Dywen and Kedge Whiteye that two of the queen's men, Ser Richard Horpe and Ser Justin Massey, were seen riding off to the south.

The next morning, Jon wakes early to see off Sam, Gilly, and Maester Aemon, as they depart for Eastwatch. He then meets with ranger Bedwyck. Jon tells Bedwyck that he is putting a garrison in the abandoned way-castle Icemark and giving him command of it. Both of them assert the danger of wildlings climbing over and creating a toehold for the rest, referring to Raymun Redbeard having done just that to bypass the wall. Jon says he is intending to garrison all of the castles on the Wall, but for the time being, only Icemark and Greyguard. When he learns that Janos Slynt is to command Greyguard, Bedwyck urges Jon to choose someone more trustworthy. 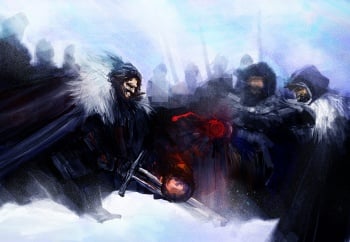 Half the morning passes before Lord Janos reports as commanded, escorted by Kegs and Dolorous Edd. Jon tells him that he is giving him command of Greyguard (partly in light of Slynt's years commanding the City Watch, but primarily to separate Slynt from Alliser Thorne and end their scheming), but Slynt curses him and storms out. The next morning, Jon finds Slynt breaking his fast in the common room and announces that he is giving Slynt one last chance to drop his spoon and report to the stables to depart for Greyguard. After Slynt refuses him again and mocks him in front of his men and Stannis' men, Jon instructs Iron Emmett and Edd to take Slynt to the Wall and hang him. As Slynt is being dragged out, Jon changes his mind and orders a block brought so he can behead Slynt himself with Longclaw. With his head on the block, Slynt desperately begs Jon for mercy. Jon refuses and carries out the execution. Watching from the steps of the King's Tower, Stannis meets Jon's eyes and nods briefly in approval.