From A Wiki of Ice and Fire
(Redirected from Wight)
Jump to: navigation, search
For wights not controlled by the Others, see fire wight. 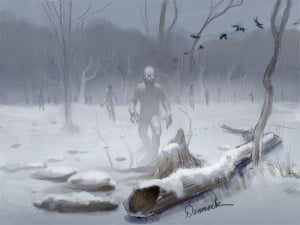 Wights are dead men or creatures resurrected by Others through necromancy,[1] seemingly when touched by the cold that accompanies them.[2] Anyone who falls against the Others must be burned, or else the dead will rise again as their thralls. 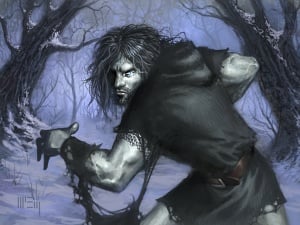 The appearance of wights depends on the condition of the corpse when it is raised. Some are lifelike, while others are badly rotten although the process of decay has been halted. All are easily identified by their eyes having turned bright blue[3][4] like two blue stars,[5] and their hands and feet black and swollen with pooled and congealed blood.[6]

Unlike Others, wights are slow and clumsy.[7] Wights have a queer, cold scent that can panic living animals if they catch a whiff of it.[5] It appears that wights retain at least some of their former memories.[2][8] Wights can remain in a state of stasis, lying in wait to attack.[2][9] Others ride dead horses as their steeds.[7]

Being dead, wights feel no pain and will continue to fight regardless of injury.[5] Though they can be stopped by total dismemberment, their limbs can continue to move if detached from their bodies. When a wight is destroyed, the blue disappears from its eyes.[2][5]

Wights are flammable and quickly consumed if set aflame.[2] It is unknown if they are vulnerable to dragonglass,[5] or if they can cross the Wall on their own.[2] The burning of corpses prevents them from being reanimated by the Others,[10] so the free folk who live beyond the Wall burn their dead.[11][10]

It is stated in The Seven-Pointed Star that spirits, wights, and revenants cannot harm a pious man, so long as he is armored in his faith.[12]

According to legend, the Others led hosts of the slain during the Long Night, and the last hero was hunted by dead men and giant ice spiders.[13] The people of the Seven Kingdoms now consider them only monsters from children's tales, however.[14] 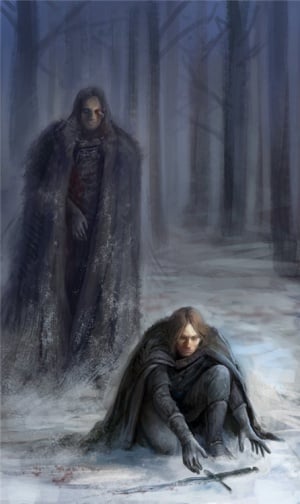 After Ser Waymar Royce is killed by Others in the haunted forest, he rises as a wight and kills Will.[3]

The bodies of Othor and Jafer Flowers are found beyond the Wall and brought south to Castle Black by the Night's Watch, but during the night the corpses rise. Jon Snow and Ghost rescue Jeor Mormont, Lord Commander of the Night's Watch, from the wight that was Othor; the wight seemed to know where Jeor slept and who he was as it tried to kill him.[2] The wight that was Jafer kills five men, including Ser Jaremy Rykker with his own dagger.[15]

At Winterfell, Old Nan tells Bran Stark the tale of the last hero in which she mentions that the Others led hosts of the slain and fed their dead servants on the flesh of human children.[13]

To impress on the Iron Throne the severity of the threat from beyond the Wall so that King Joffrey I Baratheon may send more troops to the Wall, Ser Alliser Thorne is sent to King's Landing with Othor's still-moving hand in a jar. Tyrion Lannister keeps Alliser waiting so long that Othor's hand decomposes into bones, however, and it is therefore unconvincing.[16]

The great ranging of the Watch is crushed in the fight at the Fist by a horde of wights sent against them;[17] Samwell Tarly spots a dead bear among the wights.[7] Those who survive are led by Lord Commander Mormont on a grim march back to Craster's Keep. Sam notices that there are no attacks by the Others or the wights while they are at Craster's home,[4] but Jeor and his host are slain during the mutiny at Craster's Keep.[4]

Sam, Gilly, and her son travel south for the Wall, but they are beset at a village by wights, some of whom had been men of the Night's Watch. One of those wights was Small Paul, whom Samwell tries to stab with a dagger made from dragonglass. The dagger shatters against Paul's chainmail, but Sam destroys the wight's skull with burning wood. Coldhands and his ravens rescue the humans from the other wights.[5] 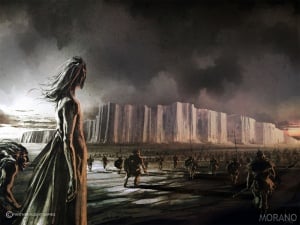 Torwynd dies a few days after the battle beneath the Wall from the cold. He rises as a wight and his father Tormund is forced to slay him.[18] Although he is in the body of a wolf, the skinchanger Varamyr thinks that the wight of Thistle recognizes him.[8]

While approaching the cave of the three-eyed crow, Bran and his companions are attacked by frozen wights who had been waiting in the snow.[9] The wights are set ablaze by Leaf.[9] Later, while Bran trains with the three-eyed crow, Summer eats the flesh from a still-grasping severed arm. The arm stops moving once the direwolf cracks open the bone to eat its marrow.[19]

While listening to gossip in the Lazy Eel in White Harbor, Lord Davos Seaworth observes that no sailors discuss wildlings, wights, and giants, unlike the men at Eastwatch-by-the-Sea.[20]

Now Lord Commander, Jon Snow consigns some wildling corpses from a weirwood grove to the ice cells of Castle Black, hoping they can be studied when they rise up.[21] Maester Aemon and Samwell would have understood Jon's actions, but Septon Cellador is horrified.[22] Jon later goes down to the ice cells where they have four living men and two wildling dead men, whom he had almost forgotten. He had hoped to learn something from the bodies, but the corpses remained dead.[23] When Jon decides to move the living men he instructs Bowen Marsh to leave the corpses. Jon thinks he will need to burn them eventually, but for the time being they are bound with iron chains inside the cells to hold them harmless.[23]

Cotter Pyke sails towards Hardhome by the command of Lord Commander Snow. By rescuing the wildlings Jon hopes to prevent the Others from raising an enormous army of wights by killing the thousands of wildlings stranded at Hardhome and raising them as their thralls. When Cotter arrives at Hardhome he sends a report to say there are dead things in the woods and dead things in the water.[24] 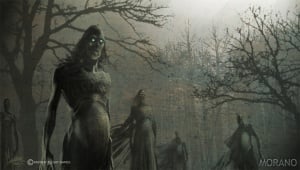 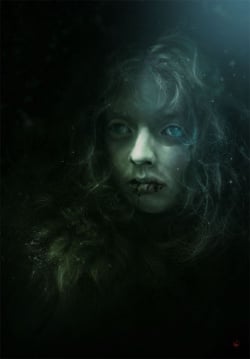 A wight child - Art by AniaEm ©

The cold winds are rising, and men go out from their fires and never come back ... or if they do, they're not men no more, but only wights, with blue eyes and cold black hands. Why do you think I run south with Stiv and Hali and the rest of them fools?[25]

We've seen the dead come back, you and me, and it’s not something I care to see again.[26]

Samwell: Why don’t they come finish us?
Grenn: They only come when it's cold.
Samwell: Yes, but is it the cold that brings the wights, or the wights that bring the cold?[4]

Necromancy animates these wights, yet they are still only dead flesh. Steel and fire will serve for them. The ones you call the Others are something more.[1]

You saw the wights come swarming up the Fist, a tide of living dead men with black hands and bright blue eyes.[27]

You'd best pray it's a wildling blade that kills me, though. The ones the Others kill don't stay dead ... and they remember.[28]

Cellador: Wights are monstrous, unnatural creatures. Abominations before the eyes of the gods. You ... you cannot mean to try to talk with them?
Jon: Monsters they may be, but they were men before they died. How much remains? The one I slew was intent on killing Lord Commander Mormont. Plainly he remembered who he was and where to find him ... My lord father used to tell me that a man must know his enemies. We understand little of the wights and less about the Others. We need to learn.[22]

Are you so blind, or is it that you do not wish to see? What do you think will happen when all these enemies are dead? Let me tell you what will happen. The dead will rise again, in their hundreds and their thousands. They will rise as wights, with black hands and pale blue eyes, and they will come for us.[22]