Orphans of the Greenblood 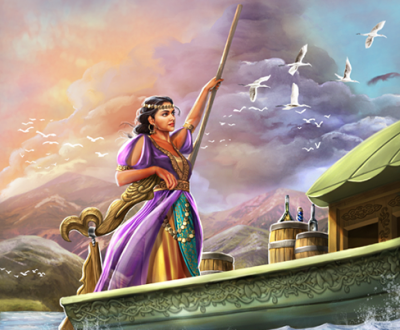 Orphans of the Greenblood are the descendants of the Rhoynar, who fled in Nymeria's ten thousand ships to Dorne, but refused to assimilate into Dornish culture.

Orphaned from their Homeland

The orphans still mourn the loss of their distant homeland in Essos, and so continue to practice the traditions of their river-faring ancestors.

They consider themselves to be "orphans" as they are of the Rhoynar and have been orphaned from their "Mother", the river Rhoyne, which in their faith also holds a divine status. Therefore, they also identify the river as "Mother Rhoyne."[1]

The orphans live on rafts along the river Greenblood. It is said that when they first came to Dorne, they built their smaller boats from the burned carcasses of the ships they used to cross the narrow sea.[1]

The orphans of the Greenblood pole their boats up and down the river and its tributaries, fishing, picking fruits, and doing whatever work is required.[1] Some orphans have been known to sell cloth and spices up and down the Greenblood.[2] They dance and sing on the river, and are also said to have great knowledge of the healing arts, curing warts and producing the best midwives.[1] They speak the Rhoynish language, though in secret after it was banned by the Red Princes.[3]

They founded Planky Town as a gathering place, lashing together their boats,[3] and go there to trade with the carracks, cogs, and galleys from across the narrow sea.[1]

Some Greenblood-born orphans have returned home to the Rhoyne, such as Yandry and Ysilla, who ply the river on the Shy Maid.[4][5] Orphans of the Greenblood on a boat plying the river. © FFG

The orphan boats are pole boats. They have hardly any draft to speak of and are painted and carved. They have low roofs and wide beams. Daeron I Targaryen disparaged them as "hovels built on rafts," but that is hardly a fair assessment; all but the poorest orphan boats are wonderfully carved and painted.[1] For example, one pole boat is painted in shades of green, with a curved wooden tiller shaped like a mermaid, and fish faces peering through her rails. Poles and ropes and jars of olive oil clutter her decks, and iron lanterns swing fore and aft.[1]

One of Princess Arianne Martell's companions in her attempt to crown Princess Myrcella Baratheon is the orphan Garin, her milk brother. He has arranged for them to meet some orphan friends on the Greenblood, who will take them down the river. However, when they reach the pole boat, they are ambushed by Areo Hotah and his men.[1]

Prince Doran Martell takes coin and hostages from Garin's kin among the orphans, as punishment for his role in the plot.[6]

On the Rhoyne in Essos, Tyrion Lannister encounters Yandry and his wife Ysilla, two orphans who have come home to Mother Rhoyne. Yandry captains the poleboat Shy Maid, and transports Tyrion, Griff, and the rest of their party down the river to Volantis.[4][5]

Nymeria’s blood is in me, along with that of Mors Martell, the Dornish lord she married. On the day they wed, Nymeria fired her ships, so her people would understand that there could be no going back. Most were glad to see those flames, for their voyagings had been long and terrible before they came to Dorne, and many and more had been lost to storm, disease, and slavery. There were a few who mourned, however. They did not love this dry red land or its seven-faced god, so they clung to their old ways, hammered boats together from the hulks of the burned ships, and became the orphans of the Greenblood. The Mother in their songs is not our Mother, but the Mother Rhoyne, whose waters nourished them from the dawn of days.[1]