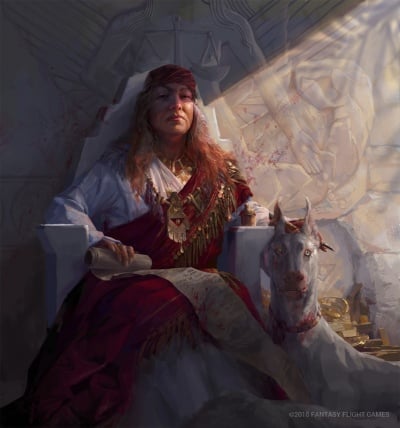 The Ghiscari are a people native to the region of Ghiscar on the continent of Essos.

The Ghiscari once ruled the Old Empire from their capital city of Ghis, establishing a civilization that grew into one of the dominant powers of the Known World, until they came into conflict with the Valyrian Freehold. The two nations fought five wars, until the Valyrians destroyed Ghis with their dragons. With the empire collapsing, the original Ghiscari bloodline was nearly wiped out, along with its religion, culture and language.

Some original Ghiscari customs remain, as the colonies of Astapor, Yunkai, and Meereen rose to prominence after the destruction of Old Ghis, with their elites styling themselves "Masters" and growing rich and powerful by buying, breeding, training, and trading slaves. After the Doom of Valyria the Ghiscari spread over Slaver's Bay, even founding the city of New Ghis, which seeks to rebuild the Old Empire under their leadership.

The "modern" Ghiscari are a mongrel people, descended of the many races enslaved by the Empire and, later, the Freehold, with dense, dark amber skin and wiry hair with red highlights.[1]

Although little of the Ghiscari culture survived the Old Empire's collapse, the modern people of Slaver's Bay take great pride in their Ghiscari heritage. The cities each have a variation of the harpy of Old Ghis as a symbol.[1][2] The highborn citizens call themselves sons of the harpy,[1][3][4] or the harpy's sons.[1] The Old Ghiscari tongue has been largely forgotten.

Most modern Ghiscari speak in the language of their conquerors, High Valyrian, twisted by growling accents and peppered with slaver's argot. However, modern Ghiscari continue to write with their unique glyphs.[1][2] Besides the bastard Valyrian dialects, a mongrel tongue combining Old Ghiscari and High Valyrian is also spoken by some along the Slaver's Bay.[5] Nevertheless, some words of the old language are still in use and are part of the dialect, such as Mhysa, which means "Mother".[2]

The wealthy slaver elite, old names with fat purses, play mock wars at the fighting pits with their slave soldiers, pretending to be the scourges of Old Ghis, or sit atop their pyramids drinking apricot wine,[4] all clinging to the glories of the Old Empire. They consider themselves the blood of Old Ghis.[2]

As a sign of high station they wear the tokar, an impractical outfit that requires the wearer to hold it in place with one hand and walk in small steps.[6] Highborn men also wear their hair teased, oiled, and twisted into fantastic shapes such as horns or wings.

Ghiscari are also fond of rich food including duck eggs, octopus stew, and even dog. It is said that Ghiscari will eat meat of any creature, except man or dragon.[7]

The Ghiscari still worship the gods of Ghis, with Graces as their priestesses. The Green Grace is the topmost religious figure in a Ghiscari city. The Ghiscari consider the blood spilled in the fighting pits a sacrifice most pleasing to their gods.

Ghiscari bury their dead in crypts below their own manses.[8]