Milk of the poppy

From A Wiki of Ice and Fire
(Redirected from Poppy)
Jump to: navigation, search 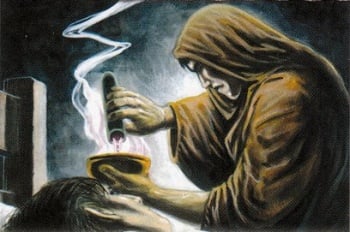 A maester preparing milk of the poppy.
© Fantasy Flight Games 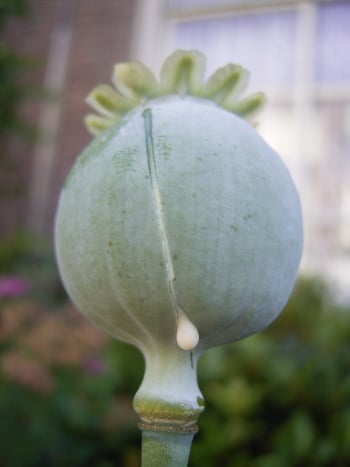 A poppy seedhead, scored so that the milk drips from it.

Milk of the poppy is used as a pain killer or anesthetic in the Known World. It is normally given to those mortally wounded or in great pain. It has a quick effect of causing sleep, even for people in great pain.[3][4][5] During this sleep, people often have strange "poppy dreams".[5][6][7][8] Milk of the poppy also has an incapacitating effect, "filling your head with clouds",[9] even after the user has woken from sleep.[6] Because of this, and possibly because it is also addictive or because overuse causes tolerance,[10] some prefer to go through strong pain instead of consuming it.[5][11][12][8] Overuse of milk of the poppy may make the user's face become puffy.[8][13]

Dothraki herbwomen make a derivative of milk of the poppy called "poppy wine".[16] Wine mixed with poppy juice can also be made by a maester, to ease pain.[12]

Princess Rhaenyra Targaryen was treated with milk of the poppy after the stillbirth of her daughter Visenya.[8]

During the Dance of the Dragons, at the Battle of Rook's Rest, King Aegon II Targaryen suffered broken ribs, a broken hip, and dragonfire burns that covered half his body. He was treated with milk of the poppy, and was "lost in poppy dreams", bedridden for the rest of the year. When the greens took Dragonstone, Aegon was further injured with two shattered legs, but refused milk of the poppy, living the rest of his life in great pain.[8]

In his old age, Lord Quellon Greyjoy suffered from excruciating stomach pains, and had to take a draught of milk of the poppy every night to sleep.[18]

During the confrontation with Ser Jaime Lannister and his men, Lord Eddard Stark is caught beneath his fallen horse and his leg is shattered. He is returned to the Tower of the Hand, where Pycelle attends to his injury, giving him milk of the poppy for the pain.[4] Under the influence of the milk of the poppy, Ned sleeps for six days and seven nights, and dreams of the combat at the tower of joy.[6]

When King Robert I Baratheon is deathly injured from being gored by a boar, Pycelle gives him milk of the poppy, first to relieve some of his pain and then more so that he sleeps.[2]

Jon Snow's hand is badly burned in a fight with a wight, and Maester Aemon gives him milk of the poppy, which causes strange dreams.[7]

When Khal Drogo is injured in battle, Daenerys Targaryen has the maegi Mirri Maz Duur treat him, and she warns the khal not to use milk of the poppy so that his body can better resist infection.[21] Drogo drinks poppy wine nevertheless, and becomes very ill.[16]

Lord Hoster Tully is bedridden with severe stomach pains, and is treated with milk of the poppy by Maester Vyman.[22]

Tyrion Lannister sees milk of the poppy in Grand Maester Pycelle's collection of medicines and poisons.[23]

Tyrion is greatly injured in the Battle of the Blackwater, and is treated with milk of the poppy, sleeping for days and dreaming, until he refuses to take any more, despite the pain.[5]

Lord Hoster Tully grows even more deathly ill, until Maester Vyman is afraid to make the milk of the poppy any stronger.[24]

When Qyburn treats Jaime Lannister for the infection and rotted flesh from his amputated hand, Jaime refuses milk of the poppy as he is afraid Qyburn may amputate his entire arm while he sleeps.[11]

Prince Doran Martell is treated by Maester Caleotte with milk of the poppy for the pain of his gout.[25]

Joss Stilwood, Ser Gregor Clegane's squire, tells Qyburn that Gregor drinks milk of the poppy often, like normal men drink ale, to self-treat his blinding headaches. Gregor's tolerance of and dependency on milk of the poppy has the effect that both Grand Maester Pycelle and Qyburn are unable to moderate his pain from his spear wounds and manticore venom poisoning.[10]

Maester Colemon treats young Lord Robert Arryn's shaking sickness with milk of the poppy, to help him sleep.[26] Later, he suggests that the boy be drugged with milk of the poppy so that he will sleep on the dangerous journey from the Eyrie to the Gates of the Moon, but Alayne Stone rejects the idea, as the Lord of the Eyrie should not arrive looking like a sack of grain tied to a mule.[27]

At a feast in Dorne, Doran Martell drinks wine with poppy juice, made by Maester Myles, to ease the pain in his joints. Later, however, when he meets with the Sand Snakes, he rejects Maester Caleotte's offer of milk of the poppy because he wants to keep his head clear, despite the fact that he thinks he would need a bucketful for his pain.[12]

After Prince Quentyn Martell is mortally wounded by dragonfire all over his body, Missandei gives him milk of the poppy during the three days he lays dying.[28]

The maester poured a slow trickle down his throat. Tyrion swallowed, scarcely tasting. Too late, he realized the liquid was milk of the poppy. By the time the maester removed the funnel from his mouth, he was already spiralling back to sleep.[5]

Maester, could I trouble you for some milk of the poppy? A thimble cup will suffice.[25]

I shall not walk that road again.[8]

—Aegon II Targaryen, rejecting milk of the poppy after his second injury

The books' descriptions strongly suggest that the poppy may well be the same flower found in the real world. Milk of the poppy is probably similar to opium, and its effects are likely the result of a strong content of morphine and codeine.