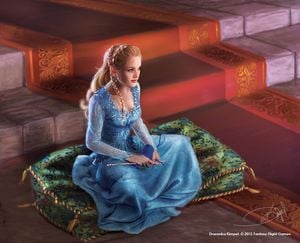 Prince Doran has been at the Water Gardens for nearly two years now, watching the children play in the pools while trying to deal with his gout. Captain Areo Hotah hears the approach of Obara Sand, eldest of the Red Viper's bastard daughters, and bars her from disturbing Prince Doran's rest. Deadly as she may be, she is no match for the Captain, but the Prince calls her into his presence before they come to blows. Obara demands justice for her father, imploring Prince Doran to marshal the Dornish army and give half to her so she might march on Oldtown and burn it to the ground, and the other half to her half-sister Lady Nym to march up the Kingsroad. Doran tells her that his brother was not murdered, but died in single combat, and that Lord Tywin has promised them Ser Gregor's head. Unappeased, Obara mocks her uncle for his meekness and stalks off after he tells her to await his word in Sunspear. Fearing an uprising in Sunspear incited by the Sand Snakes, Prince Doran tells Hotah that he must return to his seat at the Palace of the Sun. The Captain reminds him that Princess Myrcella is there, and that Ser Arys Oakheart sends letters to Queen Cersei. Hotah thinks that he and the Kingsguard will eventually cross swords, and when that occurs the Captain will kill him.

The next morning, the prince and his retinue begin the journey back to Sunspear, but along the way they come upon another of the Sand Snakes. The beautiful Lady Nym is far more tactful than her older half-sister, but no less resolved to seek vengeance for her father. Scoffing at Obara's demand to go to war, Lady Nym tells her uncle that she needs only her sister Tyene, and the two will assassinate Cersei, Jaime, Lord Tywin and King Tommen. Stating that his brother was only to take the measure of Joffrey's court and not seek revenge for Elia despite the seventeen years that have passed, Nymeria responds in parting, "My sisters and I shall not wait ten-and-seven years for our vengeance."

Arriving in Sunspear, the prince's retinue is accosted by townspeople calling for vengeance for the Red Viper. In the Old Palace, Princess Arianne greets her father and tells him that Tyene Sand awaits him in the throne room. The third of the Sand Snakes is embroidering when the captain encounters her while bearing Prince Doran to his high seat. Tyene offers her uncle the cloth she is knitting, which shows her father mounted on a sand steed, so that he will not forget the Red Viper. Prince Doran responds, "I am not like to forget your father." Tyene counsels her uncle to wed his son Trystane to Myrcella now, and then crown the princess as is the Dornish way. This would incite the Queen Regent and Highgarden to march on Dorne, where the prince's armies could bleed them in the high passes and treacherous deserts. When she calls her uncle fearful, Doran advises her, "There is a difference between fear and caution." Tyene raises her hand to touch her uncle, but Hotah brings the butt of his longaxe down on the marble floor, and cautions her, "My lady, you presume. Step from the dais, if it please you." The Sand Snake replies that she meant no harm and loves her uncle, he loved his brother. After she takes her leave, Maester Caleotte rushes to the Prince's side to make sure he was not pricked by one of Tyene's needles.

Shortly after, Prince Doran commands the captain to round up and confine all the Sand Snakes, including Ellaria's young daughters. Obara, Nymeria and Tyene are locked up in cells at the top of the Spear Tower, but with no blood spilled, the younger Sand Snakes are restricted together with their mother to the Water Gardens. When Hotah tells him that the common folk will howl when they find out, the Prince of Dorne replies, "All Dorne will howl. I only pray Lord Tywin hears them...so he might know what a loyal friend he has in Sunspear."