From A Wiki of Ice and Fire
Jump to: navigation, search
"Tommen" redirects here. For others with the same name, see Tommen (disambiguation).

Prince Tommen Baratheon is known to the Seven Kingdoms as the youngest child of King Robert I Baratheon and Queen Cersei Lannister. A member of House Baratheon of King's Landing, his siblings are Prince Joffrey and Princess Myrcella. In the television adaptation Game of Thrones, he is played by Callum Wharry in seasons 1 and 2 and by Dean-Charles Chapman in seasons 4, 5 and 6.

Tommen is plump, with long white-blond hair.[4] He has golden curls and emerald green eyes.[5][6] At the beginning of A Song of Ice and Fire, he is seven years old.

Tommen, unlike Joffrey, is regarded as a good-hearted lad who always tries his best.[7] Tommen is tenderhearted[8] and not as strong-willed as his brother. Many other characters (except his mother)[6] believe that he would be a much better king than Joffrey.[9] Tommen is fond of applecakes,[10] and enjoys reading.[5] He is a clumsy but earnest dancer.[11] He is afraid of Sandor Clegane.[11]

Tommen once adopted a fawn as a pet, but his elder brother, Prince Joffrey, later killed and skinned the animal.[8] It is also implied Joffrey bullies and abuses Tommen physically or emotionally.[12]

Following the tourney on Prince Joffrey's name day, Tommen and his siblings traveled with Cersei to Casterly Rock with their grandfather, Lord Tywin Lannister.[13] 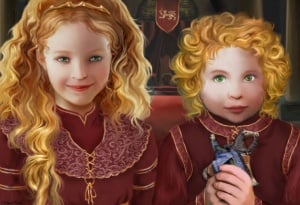 Tommen is part of the entourage of his father, King Robert I Baratheon, which journeys to Winterfell following the death of Lord Jon Arryn. At Winterfell, Tommen spars with Bran Stark using wooden swords.[14]

Tommen and Myrcella do not recognize a dirty Arya Stark when she chases cats in King's Landing. Arya bowls over Tommen when she escapes from House Lannister guards.[15]

Lord Eddard Stark, the new Hand of the King, discovers that Tommen and his siblings are not the biological children of Robert, but actually fathered by Cersei's twin brother, Ser Jaime Lannister.[16] With Robert dying from being gored by a boar, Lord Renly Baratheon suggests that Tommen and Myrcella be seized and that Arya wed Tommen. Eddard refuses, however.[17]

Tommen attends the tourney on King Joffrey's name day. Joffrey laughs at Tommen when the youth is struck by a quintain.[19]

Announcing his claim to the Iron Throne, Stannis Baratheon declares that his nephew Joffrey and his siblings are abominations born of incest.[20]

With rioting and the War of the Five Kings making King's Landing increasingly unsafe, Queen Cersei Lannister plots to sneak Tommen out of the city to Rosby under the protection of Lord Gyles Rosby, disguised as a page. However, Tommen's uncle, Tyrion Lannister, the acting Hand of the King, learns of the plot, and sends Ser Jacelyn Bywater to intercept the party on the Rosby road and take Tommen to Rosby himself, thereby under Tyrion's control and not Cersei's.[8] Tommen adopts a fawn at Rosby, and Jacelyn tasks his men with evacuating the boy to an unknown location if King's Landing falls during the war.[22]

Tyrion threatens Cersei that any harm inflicted on Alayaya, a prostitute believed to be Tyrion's lover and arrested under the queen's orders, will be visited upon Tommen as well.[23] The Kingsguard knight who allowed Jacelyn to take Tommen, Ser Boros Blount, is stripped of his white cloak by Cersei.[22] 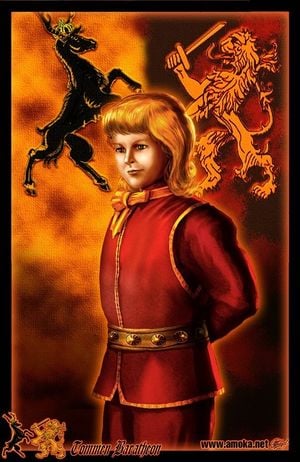 After Jacelyn Bywater is killed in the Battle of the Blackwater, Cersei has Tommen brought back to King's Landing by the Kettleblack brothers.[24]

Acting of his own accord while the Hand of Stannis, Lord Alester Florent attempts to settle a peace agreement with Lord Tywin Lannister, Tommen's grandfather, that involves a promise of marriage between Tommen and Stannis's daughter, Princess Shireen, but his plans do not come to pass.[25]

During the wedding feast of Tyrion and Sansa Stark, Tommen, who is now taller than his uncle, dances with Megga Tyrell and Sansa.[26]

Tommen participates in the wedding of Joffrey to Margaery Tyrell, handing the bride's cloak to his brother. The boy scatters rose petals before the king and queen after the ceremony. Tommen screams and cries when Joffrey chokes to death at his wedding feast.[27]

Tommen is crowned king in the aftermath of Joffrey's death, and plans are made for him to wed Margaery Tyrell in Joffrey's stead.[28] Not wanting Cersei to raise Tommen, Tywin wants Jaime to abdicate as Lord Commander of the Kingsguard and educate the boy as his ward and squire at Casterly Rock. However, Jaime refuses.[28] Jaime orders Boros Blount to serve as the boy king's food taster.[10]

Prince Oberyn Martell reminds Tyrion, who is imprisoned for Joffrey's death, that according to Dornish law Myrcella should succeed to the Iron Throne rather than her younger brother, Tommen.[29] During Tyrion's trial, Shae alleges that Tyrion killed Joffrey and planned to eventually kill Tommen.[30] 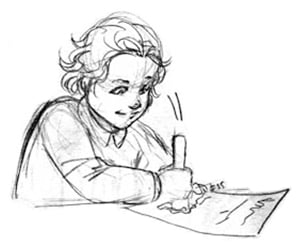 King Tommen placing the royal stamp on a document- by Pojypojy ©

Jon Snow, the new Lord Commander of the Night's Watch, and Samwell Tarly discuss a letter prepared by Maester Aemon, which asks for assistance from King Tommen. Jon recalls how Tommen had sparred with his half-brother Bran Stark at Winterfell, but that Bran is dead now while Tommen is king. Jon reluctantly agrees to have the message sent by raven.[33]

Cersei is Queen Regent after the death of her father, Tywin. Tommen acts as king, his primary and favorite activity being to place the royal stamp on any document put in front of him.[34] Cersei frowns upon his meek and tractable nature, frequently comparing him with disfavor to his willful, headstrong brother, Joffrey. Tommen is frightened of the dying Ser Gregor Clegane's screams,[6] and he flees in disgust from Tywin's corpse.[12] Kevan refuses to serve as Hand to Tommen and leaves for Casterly Rock since his niece will not yield Tommen's regency.[6] Ser Harys Swyft instead becomes the King's Hand.[34]

Lord Mace Tyrell insists that Tommen wed his daughter, Margaery, before agreeing to march on Storm's End. Cersei does not trust House Tyrell, however. When they wed, Tommen covers Margaery with the black Baratheon cloak which King Robert I Baratheon had used when he married Cersei. Tommen dances with Margaery and her cousins, Alla, Elinor, and Megga, during the feast. Tommen is fascinated and frightened when Cersei burns the Tower of the Hand with wildfire after the wedding.[11]

In Dorne, Princess Arianne Martell plots to crown Tommen's sister, Myrcella Baratheon, in opposition to the boy king.[9] The plan is foiled by her father, Prince Doran Martell, however.[35]

Wanting Tommen to have younger advisors, Cersei appoints Aurane Waters as master of ships on the small council.[36] When the small council receives Lord Commander Jon Snow's request for aid for the Night's Watch, Cersei agrees to send reinforcements in Tommen's name, but some are to be tasked with assassinating Jon.[34]

Margaery begins to influence Tommen to resist his mother's commands. Margaery gives Tommen three black kittens, Ser Pounce, Lady Whiskers, and Boots.[37] Tommen also takes an interest in knighthood and jousting, and reacts with anger when Cersei refuses to honor his command that Ser Loras Tyrell, now of the Kingsguard, be named as the Red Keep's master-at-arms.[37] Cersei assigns Ser Osney Kettleblack as Tommen's sworn shield,[37] but the queen regent also tasks him with seducing Margaery.[34]

In return for Cersei allowing the Faith Militant to reform, the new High Septon—the High Sparrow—forgives the crown's debts to the Faith of the Seven and blesses King Tommen.[38] The king gives Loras a jeweled sword when the knight departs for the siege of Dragonstone.[39] When Tommen stands up to his mother and shows assertiveness when Cersei threatens Margaery, Cersei's response is to have Boros force Tommen to beat his whipping boy, Pate, until he bleeds.[39]

In order to claim the inheritance of Gyles Rosby, Cersei claims the late lord had wanted his land and wealth to go to Tommen.[39]

Cersei engineers Margaery's arrest by the Faith for allegedly sleeping with a number of men.[40][41] Following Cersei's own arrest for treason and adultery, Tommen continues to do the bidding of the small council, now controlled by Ser Harys Swyft and Grand Maester Pycelle. A lonely Tommen asks for his wife and his mother, and he signs any decree placed before him.[41]

Jaime informs the Freys at the siege of Riverrun that King Tommen requires all captives from the Red Wedding.[42] 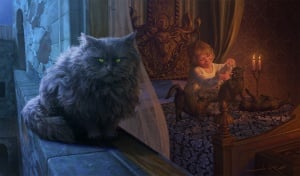 Tommen playing with his kittens - by Joshua Cairos ©

Prince Doran Martell's seneschal Ricasso toasts Tommen's name during the feast welcoming Ser Balon Swann to Sunspear, but many Dornishmen refuse to drink in the boy king's honor. Balon brings word that Cersei would like Myrcella to briefly return to King's Landing, and that Tommen could befriend Prince Trystane Martell. Later, Ellaria Sand objects to the Sand Snakes' desire for vengeance against Tywin Lannister's descendants, which includes a wish to murder Tommen.[43]

Since Cersei refused to pay back the crown's debts to the Iron Bank of Braavos, Tycho Nestoris agrees to support Stannis Baratheon against Tommen.[44]

Tommen is kept hidden away in the Red Keep when his mother completes her walk of atonement, as his great-uncle Ser Kevan Lannister, now Lord Regent and Protector of the Realm, feels no son should see his mother like that.[45]

Tommen has dinner with the newly-released Cersei and Kevan. He entertains his great-uncle with the exploits of his kittens, and Kevan thinks Tommen a sweet lad. Cersei wants Russell Merryweather to come to the capital and befriend Tommen. Following the meal, Varys has Kevan and Pycelle murdered in support of Aegon Targaryen's attempt to take the Iron Throne from Tommen.[46]

Margaery: Look, the flames are dancing. Just as we did, my love.
Tommen: They are. Mother, look, they're dancing.[11]

Cersei: Tommen, when you say your prayers before bed, tell the Mother and the Father that you are thankful you are still a child. Being king is hard work. I promise you, you will not like it. They peck at you like a murder of crows. Every one wants a piece of your flesh.


Tommen: Yes, Mother. I wouldn't mind them pecking, though. I should go to court with you every day, to listen. Margaery says—
Cersei: —a deal too much. For half a groat I'd gladly have her tongue torn out.


Tommen: Don't you say that. You leave her tongue alone. Don't you touch her. I'm the king, not you.[39]
—Cersei Lannister and Tommen

Tommen: Ser Pounce caught a mouse, but Lady Whiskers stole it from him.
Cersei: Ser Pounce must learn to defend his rights. In this world the weak are always the victims of the strong.[40]

If only Tommen were the elder instead of Joffrey. I wouldn't mind marrying Tommen.[19]

You mew like a suckling babe. Princes aren't supposed to cry.[21]

Ever think how easy life would be if the other one had been born first? The weepy one, Tommen. Seems like he'd do whatever he was told, as a good king should.[21]

Cersei: I shall rule until my son comes of age.
Jaime: I don't know who I pity more. Tommen, or the Seven Kingdoms.[48]

Tommen is no son of mine, no more than Joffrey was.[12]

The world is full of horrors, Tommen. You can fight them, or laugh at them, or look without seeing ... go away inside.[12]

He will be a better king than Joffrey.[9]

The two queens are squabbling over Tommen like bitches with a juicy bone.[43]