Jon Snow attends the feast Winterfell is holding for the royal guests and speaks with both Benjen Stark and Tyrion Lannister.

A feast is held in Winterfell in honor of King Robert I Baratheon's royal visit. Jon decides he is thankful his bastardy has relegated him to the far end of the hall with the younger squires instead of the king's family. Here he can drink as much as he wants (he has a man's thirst) and mingle freely with those around him.

Jon watches the king and his family as they arrive. He recognizes Queen Cersei's false smile and is disappointed with fat, red-faced King Robert. The eight-year-old Princess Myrcella seems smitten with her escort, Robb Stark, leading Jon to decide she is insipid. Arya Stark is escorted by plump, young Prince Tommen Baratheon. The twelve-year-old crown prince, Joffrey Baratheon (who is even taller than Robb), is escorting the radiant Sansa Stark. Jon decides he does not like Joffrey’s pouty lips or the disdain the prince seems to hold for Winterfell. He also notes that the queen's brother, Ser Jaime Lannister, looks like a proper king, and that waddling dwarf Tyrion Lannister is grotesquely fascinating, as ugly as Jaime and Cersei are beautiful. The last to enter are Benjen Stark and Theon Greyjoy. 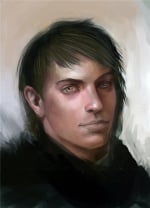 Jon feeds his direwolf, Ghost, under the table and watches the pup silently face down a full-grown dog three times his size. Bringing his wolf to the feast is another perk to being the bastard. Jon is soon joined by his uncle Benjen, who asks Jon how much he has had to drink, adding that Jon is older than he was when he first got truly drunk. Benjen asks about Ghost and Jon explains that he named him Ghost for his white color and because he never makes a sound. Benjen then asks why Jon is not at the main table and Jon says flatly that Lady Catelyn thought seating a bastard with the king might give offense.

Benjen comments that Eddard does not seem festive and Jon adds that neither does the queen, probably because of King Robert's visit to the crypts of Winterfell. Benjen commends Jon's keen observation and remarks that he could use a man like him on the Wall. Jon asks if he can return to the Wall with Benjen. The older man replies that the Wall is a hard place for a boy, but Jon counters that he will turn fifteen on his next name day and it is said bastards grow up faster than purebloods. Jon thinks about how all his half brothers and sisters have futures, but there is no future for a bastard. Benjen says that he should know a woman and father a bastard or two first, to know what he will be giving up. This angers Jon, who states that he will never father a bastard and runs off with Ghost at his heels before anyone can see him cry.

As Jon is leaving, Tyrion Lannister speaks to him from a ledge in the deserted yard and asks if he can take a look at Ghost. Jon offers to help him down, but Tyrion jumps down, acrobatically landing on his hands and vaulting to his feet. Ghost is uncertain about Tyrion, but submits to examination at Jon's command. Tyrion asks if Jon is Eddard's bastard. Jon bridles and Tyrion apologizes that as a dwarf he can usually speak as he pleases, like a jester. He comments that Jon seems to have more of the north in him than his half-siblings. Tyrion advises Jon never to forget who and what he is so that no one can use it against him. When Jon questions what Tyrion would know about being a bastard, Tyrion replies that all dwarfs are bastards in their father's eyes and that, although all dwarfs are bastards, not all bastards need to be dwarfs.