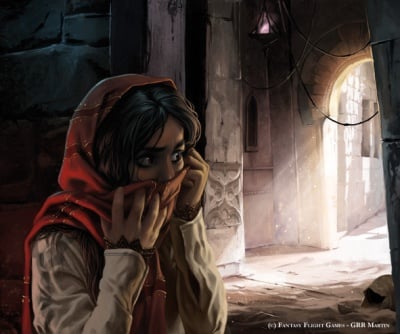 The surname a bastard received appears to be connected to the location the child is raised, though this is not a consistent rule. Because of this, bastards who are half-siblings might have different surnames. For example, King Robert I Baratheon's eldest bastard, born and raised in the Vale, is called Mya Stone, while his bastard from the stormlands (fathered on a noblewoman from the Reach) is called Edric Storm. However, whilst Aegor Rivers was raised at Stone Hedge in the riverlands, his half-brother Brynden was also called Rivers, despite having lived at least the first few years of his life with his mother at King's Landing in the crownlands.[21] Prince Oberyn Martell's eight bastard daughters all have the surname Sand, even though the eldest, Obara, lived in Oldtown in the Reach during the earlier years of her life,[28] and her sister Nymeria was born in Volantis, across the narrow sea.[29] As the youngest region in the realm, it is unclear exactly when "Waters" became the common surname for bastards from the crownlands: the earliest mention of it is from 74 AC, applied to the children of shamed kingsguard knight Lucamore Strong.[30]

Most legitimate offspring of a bastard decides to keep the bastard surname.[26] If two bastards from two different regions (i.e. with two different surnames) marry, the children will most likely take their father's surname.[31] Some later legitimate offspring of bastards might change their surname to demonstrate their legitimate nature, and remove the bastard-born taint.[26] One such an example is the son of Jon Waters. Jon Waters was the bastard son of Princess Elaena Targaryen and Lord Alyn Velaryon.[32][33] His trueborn son changed his name from "Waters" to "Longwaters" in an attempt to remove the taint of bastardy,[33] and to demonstrate he was of legitimate birth himself.[26] 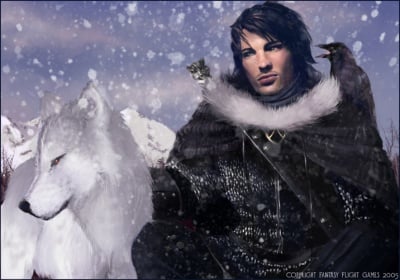 At any point, the biological father of a bastard may acknowledge him and bring him formally into his house. King Robert I Baratheon acknowledged Edric Storm at his birth, although the boy was raised at Storm's End.[40] Lord Roose Bolton brought his bastard son, Ramsay Snow, to the Dreadfort following the death of his only trueborn son, Domeric, albeit without acknowledging him.[14][42] An acknowledged bastard might even be considered to inherit a seat when no direct heirs can be found.[14]

Prince Oberyn Martell has fathered eight bastard daughters on five mothers.[43] His children are raised at the court of Sunspear, where several are close to the heir of Prince Doran Martell, Princess Arianne.[44][45] The Dornish are not greatly concerned about whether or not a child is trueborn or bastard-born, especially not if the child born to a paramour.[46] While Prince Oberyn's four elder daughters were born of mothers of variable social stations - Obara's mother was a whore, Nymeria's mother a Volantene noblewoman, Tyene's mother a septa and Sarella's mother a trader captain from the Summer Islands - they appear to be treated no differently from Elia, Obella, Dorea, and Loreza, the children he fathered on his recognized paramour, Ellaria Sand.[43][44][47] 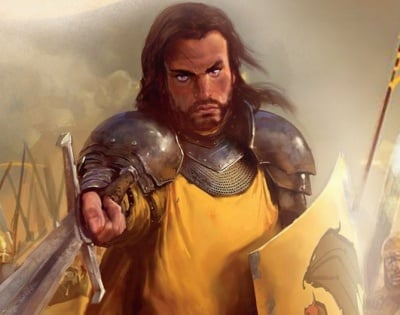 Besides acknowledging bastards, they can also be legitimized. This power is reserved to monarchs alone.[48][49] Once a bastard is legitimized, this cannot be undone.[48]

The children of Lord Lyonel Hightower and Lady Samantha Tarly were rendered legitimate once a new High Septon allowed the couple to marry.[51][52]

King Aegon IV Targaryen legitimized all of his bastards on his deathbed, both those born by highborn mothers, who were also known as the Great Bastards, and those who had been baseborn.[17][21] This act by King Aegon eventually played a large role in several wars fought over the Iron Throne between the trueborn descendants of King Aegon and his bastard-born offspring, the Blackfyre Pretenders.[48]

Following his role in the War of the Five Kings, the bastard-born son of Lord Roose Bolton, Ramsay Snow, is legitimized in order to marry a highborn bride.[53]

The bastard-born have few rights under law and custom.[10] When it comes to rights of inheritance, there are no clear cut laws.[54]

A bastard may inherit if the father has no other trueborn children nor any other direct heirs to follow him. For example, in 299 AC, following the deaths of Lord Halys Hornwood and his trueborn son, Daryn, Halys's natural son Larence Snow is considered as a potential heir by House Hornwoods overlords, House Stark.[14] However, in order to inherit or be installed as an heir, the bastard-born child will first have to be legitimized by a royal decree.[48]

Bastards do not have the right to use the arms of the highborn families from which they descend.[55] Recognized bastards who take arms (noble born, knighted, etc.) often, but not always, take the coat of arms of their fathers with the colors reversed.[17] A bend sinister is sometimes added, as exemplified by Ser Walder Rivers's sigil.[56] A bastard that wants to emphasize his affiliation and minimize his own bastardy may decide to use the same sigil as his father, as did Glendon Flowers,[1] perhaps illegally.[57][55] Other bastards might choose to combine multiple sigils, as Aegor Rivers did.[58]

Prince Joffrey Baratheon is believed by King Robert I Baratheon to be his trueborn son, and is therefore the heir to House Baratheon of King's Landing, and heir to the Iron Throne. However, Lord Eddard Stark discovers that Joffrey, as well as his siblings Myrcella and Tommen, are actually the bastards of Queen Cersei Lannister and her twin brother, Jaime.[59]

The revelation of Joffrey's bastardy, as the product of adultery on the part of Queen Cersei Lannister, causes Joffrey's claim to the Iron Throne to be disputed after Robert's death by Robert's eldest brother, Stannis Baratheon.[60]

Ramsay Snow's official bastard status is removed by a royal decree, as a reward for the Boltons betraying the Starks and bowing to the Lannisters, and he becomes the heir of House Bolton.[53]

Robb Stark, as King in the North, plans to legitimize his bastard half-brother Jon Snow and proclaim him as his heir.[48] Following Robb's death, Stannis Baratheon, having proclaimed himself King of the Seven Kingdoms, also proposes to legitimize Snow and make him Lord of Winterfell,[61] but Jon declines Stannis's offer, electing to become Lord Commander of the Night's Watch instead.[24]

Sansa Stark is still posing in the Vale as Alayne Stone, the bastard-born daughter of Petyr Baelish.[62]

Tyrion Lannister uses the name Hugor Hill while traveling through Essos, pretending to be a bastard from Lannisport.[63][64]

Orys Baratheon was a baseborn half brother to Lord Aegon, it was whispered, and the Storm King would not dishonor his daughter by giving her hand to a bastard. The very suggestion enraged him.[65]

Go away, I wanted only Freys up here, the King in the North has no interest in base stock.[66]

Well, Aerion Brightflame did not stay in Lys all his life, only a few years. He may have fathered a few bastards there, which would mean Dany has "relatives" of a sort in Lys... but they would be very distant relatives, from the wrong side of the blanket.[67]