From A Wiki of Ice and Fire
Jump to: navigation, search
For other uses, see Brynden (disambiguation).

Ser Brynden Rivers, called "Lord Bloodraven", was the bastard son of King Aegon IV Targaryen by his sixth mistress, Lady Melissa Blackwood. He had two older sisters, Mya and Gwenys, and numerous half-siblings.[8] As his mother was highborn, Brynden was counted among the Great Bastards. Like his bastard siblings, Brynden was legitimized by King Aegon IV in 184 AC. Brynden's personal arms were a white dragon with red eyes breathing red flame on a black field.

Brynden was a Targaryen loyalist during the Blackfyre Rebellions.[10] He served as the Hand of the King to King Aerys I Targaryen[1] and King Maekar I Targaryen.[6] He was eventually sent to the Night's Watch by King Aegon V Targaryen, where he rose to the position of Lord Commander.[11]

Brynden was an albino and thus had milk-white skin, long white hair, and red eyes.[12] On the right side of his face he had a red winestain birthmark that extended from his throat up to his right cheek from which he earned his name Bloodraven, as the birthmark was said to look somewhat like a raven drawn in blood. However, Ser Duncan the Tall thought the birthmark just a blotch.[1] According to George R. R. Martin it is more a suggestion of a raven shape, like an ink blot.[13] 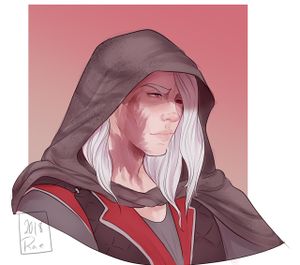 Brynden was not as tall or muscular as his half brothers, Daemon and Aegor,[12] but he was considered more cunning.[1] A shade under six feet tall, Brynden was thin and gaunt with a grim forbidding aspect with sharp, vaguely sinister features.[12][14] He typically wore the colors of scarlet and smoke, a dark grey mottled and streaked with black.[12] For instance, one of his outfits included a scarlet tunic with black boots and a smoke-colored cloak.[2] Because his skin was sensitive to light, he usually went about cloaked and hooded.[1][12]

Brynden lost an eye during the First Blackfyre Rebellion and rarely covered the empty socket with a patch, preferring to display his scar and empty socket to the world.[13] He wore his white hair straight and to his shoulders, with the front brushed forward to cover his missing eye.[2][12] Although Brynden carried the Valyrian steel longsword Dark Sister and was a good swordsman, he was an expert bowman who preferred to use his tall weirwood longbow.[14]

Brynden was rumored to be a sinister sorcerer and spymaster[12][2] who effectively ruled the kingdom "with spies and spells" and as "Lord Bloodraven".[1] A popular riddle asked was, "How many eyes does Lord Bloodraven have? A thousand eyes, and one".[2] The song "A Thousand Eyes, and One" was written about Brynden.[11] 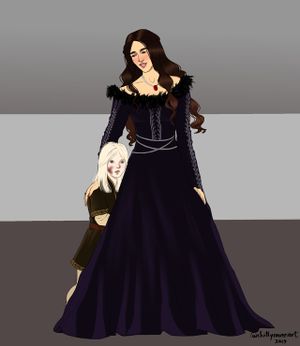 Young Brynden with his mother, Melissa Blackwood, by chillyravenart©

Brynden was born in King's Landing[9] as the bastard son of King Aegon IV Targaryen and his sixth mistress, Lady Melissa Blackwood, who had replaced the king's fifth mistress, Lady Barba Bracken.[15] Brynden's older sisters were Mya and Gwenys Rivers.[8] Although Melissa was eventually dismissed by Aegon IV in favor of his seventh mistress, Lady Bethany Bracken, Brynden was able to maintain close relations at court because of Melissa's popularity.[10]

Brynden was resented by Barba's bastard son, Aegor Rivers, nicknamed "Bittersteel". At some point, Brynden became a lover to his half-sister, Shiera Seastar. As Aegor desired her as well, Shiera became another point of rivalry between the two half-siblings.[16] Brynden would become Shiera's most ardent admirer.[17]

Like his other bastard siblings, Brynden was legitimized by his father Aegon IV in 184 AC, when the king was on his deathbed.[8]

During the First Blackfyre Rebellion, Brynden remained loyal to his trueborn half-brother King Daeron II Targaryen instead of joining his bastard-born half-brother, Daemon I Blackfyre.[18] Brynden commanded his private guards, a group of longbowmen called the Raven's Teeth.[1][10][4]

At the Battle of the Redgrass Field in 196 AC, the Raven's Teeth gained the Weeping Ridge and rained arrows down onto the Blackfyres from three hundred yards away, killing first Daemon's eldest son Aegon, then Daemon himself, and finally Aegon's twin, Aemon.[1] The arrows are said to have been driven by Brynden's sorcery,[1] and people later named Brynden a kinslayer.[1][2] Daemon's death led the rebels to rout, but some were rallied by Aegor Rivers in a mad charge.[1] The resulting duel between the rival half brothers left Brynden blinded in one eye and Aegor retreating.[10]

With Daemon and his eldest sons dead, Aegor fled into exile in the Free Cities with Daemon's wife, daughters, and remaining sons.[10] After the war Brynden advocated a hard line against the rebels, winning out over Prince Baelor Targaryen's call for leniency.[1]

Reign of King Aerys I Targaryen 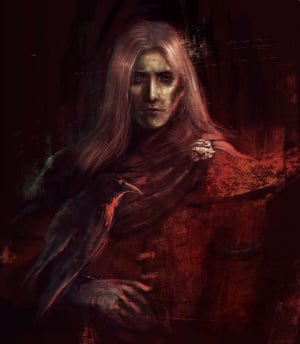 In 209 AC Brynden became Hand of the King and master of whisperers, serving throughout the reign of his nephew, King Aerys I Targaryen.[5] His first major trial was the Great Spring Sickness, an epidemic that had killed King Daeron II Targaryen, Princes Valarr and Matarys Targaryen, and tens of thousands more. Seeing the corpses pile up in the streets of King's Landing, Brynden ordered the pyromancers of the Alchemists' Guild to burn them in the Dragonpit. At night, the green glow of the wildfire pyres could be seen throughout the whole city.[1]

Around the same time, a drought began that lasted a little more than a year,[N 1] causing many smallfolk to leave their lands in search of somewhere the rain still fell. Brynden ordered them to return to their own lands but few obeyed. Indeed they blamed Brynden, cursing him as a kinslayer. Many of them became robbers. Prices increased as trade dwindled, and it was widely held that travel was less safe under Aerys's reign then it had been under that of his father.[1] Some people alleged that Brynden and his paramour, his half-sister Shiera Seastar, used sorcery to uncover secrets.[5] Brynden proposed to Shiera numerous times, but she always refused his offers of marriage.[17]

In 211 AC, Ser Otho Bracken, known as the Brute of Bracken, was expected to succeed to the lordship of Stone Hedge. Not wanting to see such a man in power, the traditional Bracken rivals of House Blackwood were expected to start a war to root him out. It was suggested that Brynden, being half-Blackwood himself, would not be inclined to hear any complaints of a member of House Bracken. Septon Sefton believed that Brynden would most likely do nothing, and that if he did decide to act, it would only be to help his Blackwood cousins to bring Otho to bay.[1]

In 211 AC Lord Dagon Greyjoy raided the western coast, including Fair Isle, the shipping of the Arbor, and the village of Little Dosk in the Reach.[1] By 212 AC, Lord Beron Stark had called his banners to repulse the ironmen from the Stony Shore, while House Lannister was building ships to strike at the Iron Islands.[2] During all of this Brynden kept his eye on Tyrosh, where his half-brother Aegor Rivers remained with the surviving sons of Daemon Blackfyre in exile.[2] However, Victarion Greyjoy recalls that, "...even Dagon could not defeat the dragons",[19] suggesting that the Targaryens eventually intervened. 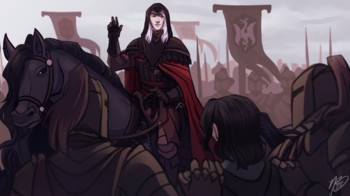 Bloodraven at the Second Blackfyre Rebellion, by Naomimakesart©

During the wedding tourney at Whitewalls in 212 AC, Ser Maynard Plumm defended Brynden's actions as Hand to Ser Kyle the Cat.[2] Through his informants,[5] including a Vyrwel man-at-arms and a troupe of comic dwarfs, Brynden was aware of a plot at Whitewalls to put Daemon II Blackfyre forward as the legitimate Lord of the Seven Kingdoms. Brynden marched on the tourney with three hundred Raven's Teeth, three brothers of the Kingsguard, five hundred other knights, and five thousand infantry drawn from the crownlands and the riverlands. In the face of such a force Daemon tried to rally the tourney-goers to battle, but found little support. Daemon then challenged the Hand to single combat; Brynden refused and arrested the pretender, thus containing the Second Blackfyre Rebellion.[2] Daemon was kept in captivity rather than executed with the other rebel leaders, ensuring that Aegor Rivers could not name his brother Haegon as a serious pretender.[5]

In the aftermath of the Third Blackfyre Rebellion, Brynden argued that the captive Aegor Rivers should be put to death, but King Aerys I Targaryen decided to send Aegor to the Night's Watch instead. However, Aegor Rivers escaped back to Essos when his ship was intercepted en route to Eastwatch.[20] 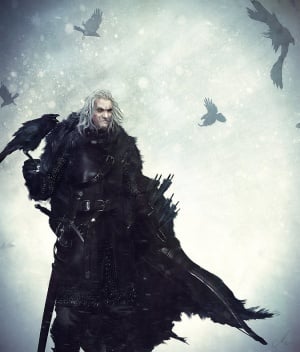 Brynden Rivers as Lord Commander of the Night's Watch, by Mike Hallstein ©

Brynden continued as Hand for Aerys's successor, his brother Maekar I, in 221 AC. After Maekar's death in 233 AC, Brynden, as the Hand of the King, called a Great Council in King's Landing to discuss the disputed matter of succession. Aenys Blackfyre wanted to peacefully participate in the Great Council, and Brynden offered him safe conduct to King's Landing from Tyrosh. Once Aenys arrived in the capital, however, he was arrested by the gold cloaks and then beheaded in the Red Keep.[6]

The Great Council chose Maekar's youngest son to succeed as King Aegon V Targaryen, whose first act was to arrest Brynden for the murder of Aenys.[4] It is suggested by Maester Aemon that Brynden was imprisoned in the Red Keep's dungeons.[11] Brynden argued that he had sacrificed his honor for the good of the realm, but Aegon refused to set Brynden free. He instead offered the option of taking the black instead of death, which Brynden accepted.[4]

When Maester Aemon sailed for the Wall in 233 AC, he was escorted by King Aegon V's friend, Ser Duncan the Tall of the Kingsguard, and accompanied by an honor guard of recruits for the Night's Watch. These were two hundred men and prisoners, including Brynden Rivers. Many of the men were archers from Brynden's Raven's Teeth.[11][4] According to a semi-canon source, Brynden took Dark Sister with him when he went to the Wall.[21]

Maester Aemon tells Samwell Tarly that Brynden accompanied him to the Wall when he joined the Night's Watch, with Ser Duncan the Tall as an escort.[11]

Bran Stark discovers that Brynden is still alive as the three-eyed crow, the last greenseer living with children of the forest in a cave beyond the Wall.[22][9][7] Brynden becomes Bran's mentor in the art of greensight and skinchanging.[3] 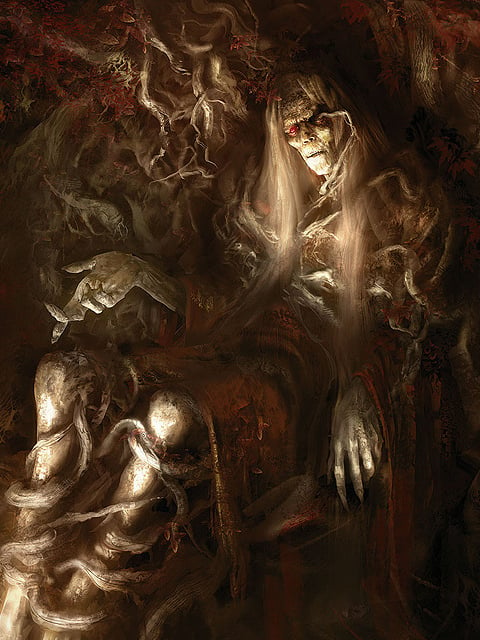 The three-eyed crow, by Marc Simonetti ©

Treason is no less vile because the traitor proves a craven.[2]

There have always been Targaryens who dreamed of things to come, since long before the Conquest.[2]

—Brynden to Duncan the Tall and Aegon Targaryen

I wore many names when I was quick, but even I had a mother, and the name she gave me at her breast was Brynden.[3]

—the three-eyed crow to Meera Reed

I have my own ghosts, Bran. A brother that I loved, a brother that I hated, a woman I desired. Through the trees, I see them still, but no word of mine has ever reached them. The past remains the past. We can learn from it, but we cannot change it.[3]

The Mother marked Lord Rivers on the day that he was born, and Bittersteel marked him once again upon the Redgrass Field.[1]

—Sefton to Duncan the Tall

How many eyes does Lord Bloodraven have? the riddle ran. A thousand eyes, and one. Some claimed the King's Hand was a student of the dark arts who could change his face, put on the likeness of a one-eyed dog, even turn into a mist. Packs of gaunt gray wolves hunted down his foes, men said, and carrion crows spied for him and whispered secrets in his ear. Most of the tales were only tales, Dunk did not doubt, but no one could doubt that Bloodraven had informers everywhere.[2]

Lord Bloodraven is a sorceror and a bastard.[2]