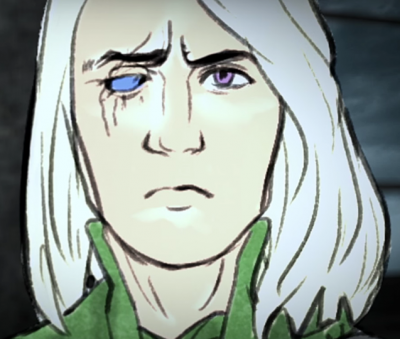 Aemond Targaryen killed his nephew Lucerys Velaryon during the Dance of the Dragons. Art from the Game of Thrones Season 5 Blu-ray, supplemental content.

Kinslaying is a great taboo in Westeros. Any individual who kills a member of their own family is dubbed a kinslayer, and believed to be cursed forever.[1] Many nobles and smallfolk believe this, and thus those who slay their own blood are usually looked down upon or shunned. Across Westeros, in the religions of the old gods, the Faith of the Seven, and even of the Drowned God, men state that "no man is so accursed as the kinslayer" and that "the kinslayer is accursed in the eyes of gods and men".[1][2][3][4]

The stigma and notoriety of kinslaying can go both ways. For example, Victarion Greyjoy hates his brother Euron and thinks about killing him, but the stigma and curse associated with kinslaying is what restrains him from doing so.[2][5] However, when Tristifer Botley, who believes Aeron Greyjoy was killed by his brother Euron, says Euron is afraid of being seen as a kinslayer, Asha Greyjoy responds that if Euron heard this, he would murder one of his sons to prove them wrong.[6]

According to George R.R. Martin:

There are degrees in kinslaying, as in anything else. Fighting a battle in which a brother dies might be frowned upon, but killing him with your own hand would be considered far worse.[7]

Kinslayers and people suspected or accused of kinslaying

Old gods or new, it makes no matter, no man is so accursed as the kinslayer.[13]

Jaime had not wanted to believe it. Kinslaying was worse than kingslaying, in the eyes of gods and men. He knew the boy was mine. I loved Tyrion. I was good to him. Well, but for that one time ... but the imp did not know the truth of that.[24]

The gods hate kinslayers, even when they kill unknowing.[21]

Kinslaying is dry work. It gives a man a thirst.[25]

—Tyrion Lannister, to Illyrio Mopatis, on his drinking too much wine

Tell me, my lord ... if the kinslayer is accursed, what is a father to do when one son slays another?[11]

—Victarion Greyjoy, brooding on his brother