Ser Stevron Frey is a knight from House Frey, Lord Walder Frey's firstborn son, and heir to the Twins. His mother was Lady Perra Royce. Stevron has had several children through his marriages to Corenna Swann, Jeyne Lydden, and Marsella Waynwood. In the television adaptation Game of Thrones he is played by Colin Carnegie.[3] 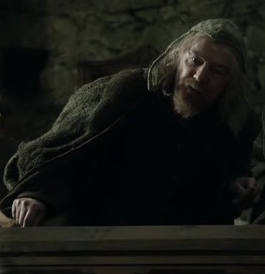 Colin Carnegie as Stevron in Game of Thrones

Like his father, Lord Walder, Stevron resembles a weasel. He has grey eyes.[4] A polite man in his sixties, Stevron's appearance shows his age. He was too old to ride in the tourney held at King's Landing in 297 AC.[4]

Walder has groomed Stevron for lordship of House Frey, though Walder often jokes that Stevron has been waiting for him to die for forty years. Through his father, Stevron has learned to place great importance on the family.[5] Stevron, unlike his father, is amiable and reasonable. Big Walder considers the tired Stevron too old for battles.[6]

After King Joffrey I Baratheon comes to the Iron Throne, Stevron and his father, Lord Walder Frey, are among the nobles demanded to swear fealty in King's Landing.[7]

Stevron is sent to parley with the northern army when they arrive beneath the walls of the Twins. House Frey allies with Robb Stark in return for him agreeing to marry a daughter of Lord Walder, and Stevron commands the Frey contingent who heads west of the Green Fork with Robb.[4]

At Riverrun after the Battle of the Camps, a cautious Stevron suggests that the north and the riverlands should let Lord Tywin Lannister and Lord Renly Baratheon weaken themselves in fighting over the Iron Throne. Stevron offers to travel to Harrenhal to ransom the captured Ser Jaime Lannister back to his father Tywin, but the Frey heir receives outrage in response. Instead, Robb is named King in the North by the collected northmen and rivermen.[8]

Robb's mother, Catelyn Stark, suggests that Stevron be sent as an envoy to Balon Greyjoy, Lord of the Iron Islands. Robb instead sends his friend, Balon's son Theon,[9] who ends up betraying Robb and capturing Winterfell.[10]

Stevron accompanies Robb in his campaign into the westerlands and personally leads the Frey soldiers into battle. He is wounded at the Battle of Oxcross. The wound is not thought serious, but three days later Stevron is found dead in his tent.[6] He is succeeded as heir to the Twins by his first son, Ser Ryman Frey. Maester Luwin scolds Big Walder and Little Walder Frey for not being upset at their uncle's passing.[6]

King Robb marries Jeyne Westerling at the Crag, breaking his promise to marry a Frey girl. On his return to Riverrun, Robb tells Catelyn that if Stevron was alive he felt he could have made amends with the Freys over the broken marriage contract. However, the other Freys, bar Olyvar, are unreasonable.[11] Robb often recalls how Stevron died bravely serving him.[11][12]

During the Red Wedding, Catelyn offers to exchange Stevron's second son, Aegon Frey, a fool nicknamed Jinglebell, for the wounded Robb, saying, "I will spare your boy's life for Robb's. A son for a son."[13] Lord Walder Frey, who has already lost his first son and heir, Stevron, replies, "A son for a son, heh. But that's a grandson ...".[13] When Lord Roose Bolton kills Robb, Catelyn responds by sawing through the throat of Aegon.[13]

Stevron: Father, you forget yourself. Lady Stark is here at your invitation.
Walder: Did I ask you? You are not Lord Frey yet, not until I die. Do I look dead? I'll hear no instructions from you.[4]

They're all waiting for me to die. Stevron's been waiting for forty years, but I keep disappointing him. Heh. Why should I die just so he can be a lord? I ask you. I won't do it.[4]

When Ser Stevron had been heir, that was one thing. The old man had been grooming Stevron for sixty years, and had pounded it into his head that blood was blood. But Stevron had died whilst campaigning with the Young Wolf in the west—"of waiting, no doubt," Lame Lothar had quipped when the raven brought them the news—and his sons and grandsons were a different sort of Frey.[5]