Maekar I Targaryen was Lord of the Seven Kingdoms and the fourteenth Targaryen king to sit the Iron Throne.[10] He was the fourth son of King Daeron II Targaryen, and was given the Targaryen seat of Summerhall, and was thus known as the Prince of Summerhall. Maekar was a capable army commander who served in two of the Blackfyre Rebellions. After a number of unexpected deaths in the royal family, he came to the throne in 221 AC.[7]

Maekar was powerfully built and wore a beard. He had violet eyes, and his hair was such a pale blond that it was almost white. Maekar had straight hair and a square-cut beard, both being the color of silver with a hint of gold. He was thickly-built and powerful-looking. Pox scars marred his cheeks.[2]

Maekar could be prickly and impatient.[2][11] He was a harsh man, quick to judge and to condemn.[7] Unlike his brother Baelor, he was not charismatic and could not make friends and allies easily.[7] After Baelor's accidental death by his hands, Maekar became even more stern and unforgiving.[7]

Maekar had his own personal coat of arms, the three-headed Targaryen dragon, quartered.[4] His armor was decorated with black curved dragon teeth along the shoulders and down his back, and the crest of his helm had dragon teeth as well.[2] He wielded a huge spiked mace.[2] As king, Maekar wore a crown of black iron points in a band of red gold.[7][12]

Maekar was the fourth son of King Daeron II Targaryen and Queen Myriah Martell.[13] He had three older brothers: Baelor, Aerys, and Rhaegel.[2] While King Daeron was no warrior, it was noted that two of his sons—Baelor and Maekar—appeared to be "all that could be wished in a knight, lord, or heir." Baelor was a tourney champion at seventeen, and Maekar seemed likely to show similar skills.[13]

As a fourth son, Maekar was not expected to rule. He married young, to Lady Dyanna Dayne, and had four sons and two daughters, Daeron, Aerion, Aemon, Daella, Aegon, and Rhae.[9]

Maekar was given the Targaryen summer residence of Summerhall for his own seat.[2]

During the First Blackfyre Rebellion in 196 AC, Maekar served as one of the Targaryen commanders. It was his shield wall that held against the "mad" attack of his uncle, Ser Aegor Rivers (called Bittersteel) in the Battle of the Redgrass Field.[4] While his brother Baelor Breakspear attacked the rebel army from the rear with a host of stormlords and Dornishmen, Maekar rallied what remained of Lord Donnel Arryn's vanguard and made an unyielding anvil against which the rebels were hammered and destroyed, and the battle was won.[13] Later, a song about "the hammer and the anvil" was made about the battle, with Baelor as the hammer and Maekar the anvil.[4]

Nevertheless, Maekar felt unappreciated. The victory was more attributed to his brother and the errors of Daemon Blackfyre, than to his efforts.[4] In other things he also stood in the shadow of his brothers, wounding his pride.[2]

Some time around 207 AC or 208 AC,[14] King Daeron II Targaryen had four grown sons, three with sons of their own. He felt that having too many potential Targaryen heirs was dangerous, and sent Maekar's third son, Aemon, to the Citadel to become a maester, despite his father's objections.[15] Maekar's wife, Dyanna Dayne, died some time before 209 AC.[2]

In 209 AC, a tourney was held at Ashford. Maekar attended to see his sons Daeron and Aerion compete, and his fourth son Aegon was to squire for Daeron. Unfortunately, the tourney at Ashford Meadow proved disastrous for Maekar and his sons. Daeron drank himself into a stupor before reaching the tournament, Aegon joined the service of a hedge knight, Ser Duncan the Tall, in disguise as "Egg", and Aerion shamed himself during the joust by deliberately killing his opponent's horse. When Duncan attacked Aerion to defend Tanselle, an innocent puppeteer, and Aerion demanded a trial by combat, Maekar supported Aerion's call for vengeance as well as Daeron's accusation that Duncan had kidnapped Aegon.[2]

Maekar was unhorsed during the trial of seven, and he fought at the same time against his brother Baelor and Lord Lyonel Baratheon, both of whom supported Duncan. Maekar delivered a lethal mace blow to Baelor's head. Baelor survived the trial, but died soon after when Steely Pate removed his helm. Maekar suspected that he would thereafter be held in suspicion as a kinslayer.[2] According to the chronicles, Prince Maekar always bitterly regretted Baelor's passing and marked its anniversary every year.[13]

Dealing with the problems of his sons, Maekar banished Aerion to the Free Cities and offered Duncan a position in his personal guard to serve as a role model for Aegon. After Duncan refused, Maekar allowed Aegon to accompany the hedge knight in his travels as his squire.[2] Maekar made Aegon promise to keep his hair shaved or dyed, to remain incognito, and also gave him a signet ring with his personal seal for his protection in case of emergencies.[4] 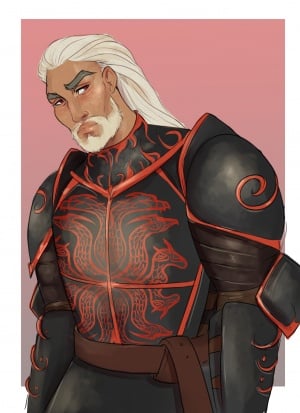 Maekar I Targaryen, by Rae Lavergne ©

Maekar's father, King Daeron II Targaryen, and nephews, Valarr and Matarys died from the Great Spring Sickness in 209 AC.[4] Maekar's brother succeeded to the throne as Aerys I Targaryen and appointed their bastard uncle, Brynden Rivers (called Bloodraven), as Hand of the King. Maekar had expected to be appointed Hand and could not get along with Lord Bloodraven, so he withdrew from court to his residence at Summerhall.[4] According to Ser Eustace Osgrey, Lord Gormon Peake, and Ser Kyle the Cat, Maekar sulked and brooded at Summerhall.[4][11]

Ser Duncan the Tall and Prince Aegon Targaryen attended the wedding tourney at Whitewalls in 212 AC. When Ser Mallor's squire suggested that Maekar desired to kill his brother Aerys, "Egg" defended his father's reputation by striking the other squire.[11] When the Second Blackfyre Rebellion began to collapse, Lord Ambrose Butterwell feared Maekar's reaction.[11]

After the accidental deaths of Daeron's third son, Rhaegel, in 215 AC and Rhaegel's son Aelor in 217 AC, the childless King Aerys recognized his sole surviving brother Maekar as his heir, and Maekar became Prince of Dragonstone.[3]

During the Third Blackfyre Rebellion in 219 AC, Maekar was recognized for his leadership. Ser Aegor Rivers was captured in battle, and Bloodraven and Maekar's son, Aerion, both urged that Aegor be executed. King Aerys was merciful, however, and allowed Bittersteel to join the Night's Watch, a fate he managed to escape.[3]

After Aerys's death in 221 AC, Maekar took the Iron Throne. Desiring to split from the past, he had a new crown forged, more warlike than previous crowns, since the crown of Aegon the Conqueror had been lost upon Daeron the Young Dragon's death during the conquest of Dorne. Nevertheless, Maekar's reign, coming between two Blackfyre Rebellions, is generally regarded as peaceful.[7] And despite his previous strife with Bloodraven, Maekar kept his uncle as Hand of the King.[7]

Maekar summoned his third son Aemon, who had earned the chain of a maester in 217 AC,[16] to court to serve the Iron Throne. Not wanting to sit on the small council as he felt that would displace the Grand Maester, Aemon chose instead to serve his eldest brother, Daeron, Prince of Dragonstone.[14] This lasted until Daeron died, reputedly from a pox he caught from a whore.[14] In 232 AC, Maekar's second son Aerion also predeceased his father, after drinking a cup of wildfire in the belief that it would turn him into a dragon.[7][14]

For seven years of Maekar's reign, a hot summer persisted. Some thought it was the Great Summer come at last. When it broke, it was followed by a short autumn and a long, cold winter.[17]

During Maekar's reign, Mad Danelle Lothston, Lady of Harrenhal, reportedly turned to the black arts, causing the downfall of House Lothston. The crown gave the lordship of Harrenhal to House Whent as a reward for their service in bringing the Lothstons down.[18]

In 233 AC, Maekar fell in battle fighting a rebellious lord on the Dornish Marches[7] during the Peake Uprising.[19] According to a semi-canon source, he was crushed to death by a rock hurled from the battlements of Starpike during the storming of the castle.[8] Maekar was succeeded by his fourth son, Aegon V Targaryen, after a Great Council was convened to resolve the political chaos.[7]

Maester Aemon tells Samwell Tarly about Maekar's objection to Aemon studying at the Citadel,[15] and the maester later tells Sam that he hopes his father found peace after he died.[20] 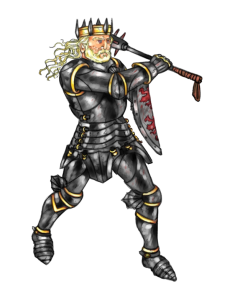 I did not come here to take counsel from a hedge knight.[2]

If a cause is just, good men will fight for it.[2]

—Maekar to Duncan the Tall

Maekar: Some men will say I meant to kill my brother. The gods know it is a lie, but I will hear the whispers till the day I die. And it was my mace that dealt the fatal blow, I have no doubt. The only other foes he faced in the melee were three Kingsguard, whose vows forbade them to do any more than defend themselves. So it was me. Strange to say, I do not recall the blow that broke his skull. Is that a mercy or a curse? Some of both, I think.
Duncan: I could not say, Your Grace. You swung the mace, m'lord, but it was for me Prince Baelor died. So I killed him too, as much as you.[2]

—Maekar and Duncan the Tall

The king's fourth son, not as bold as Prince Baelor, nor as clever as Prince Aerys nor as gentle as Prince Rhaegel, and now he must suffer seeing his own sons overshadowed by his brother's.[2]

—Raymun Fossoway to Duncan the Tall

Prince Maekar was a hard man, proud and full of scorn.[11]

And my father ... he never thought the throne would pass to him, and yet it did. He used to say that was his punishment for the blow that slew his brother. I pray he found the peace in death that he never knew in life.[20]