Daeron Targaryen (son of Maekar I)

From A Wiki of Ice and Fire
Jump to: navigation, search
For others with the same name, see Daeron Targaryen.

Prince Daeron Targaryen, sometimes referred to as Daeron the Drunken, was the eldest son of King Maekar I Targaryen and his wife Dyanna Dayne.[3] Daeron was one of the rare Targaryens who had prophetic dragon dreams.[4]

Daeron had sallow skin, sandy brown hair and a blond beard.[4] He was not much of a knight, disliking horses and swords.[4]

Daeron was born the eldest child of Prince Maekar Targaryen and his wife, Lady Dyanna Dayne. He was named after his grandfather, King Daeron II Targaryen.[4] He had three younger brothers, Aerion, Aemon, and Aegon, and two younger sisters, Daella and Rhae.[3] 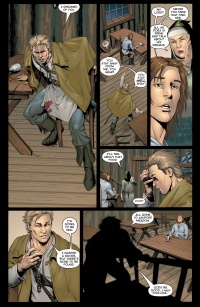 Prince Maekar sent his sons, Daeron and Aegon, to the tourney at Ashford Meadow, hoping they would outshine the sons of his brother Baelor Breakspear. Stealing away from their escort, Daeron shaved the head of Aegon, his squire, to hide his Targaryen features. Drinking at an inn, incognito, he encountered Ser Duncan the Tall and told him he had dreamed of him, ordering Dunk to stay away from him. Aegon, who wanted to participate in the tourney, stayed incognito as "Egg" and asked Dunk if he could be his squire. Though Dunk denied him then, Aegon left the inn and followed him to Ashford.

Maekar sent Ser Roland Crakehall of the Kingsguard in search of Daeron and Aegon, then left Ashford to search for them himself. When Daeron was found, he told his father that a huge robber knight made off with Aegon and that he spent the whole time pursuing them. This lie added evidence against Dunk after he was arrested for assaulting Aerion Targaryen.

Daeron apologized to Dunk for lying, saying he had not noticed Aegon was gone. He also said he had dreamed a great dragon would fall on Dunk, dead, but the knight would walk off alive. Daeron did not know what it meant, but that his dreams came true and that he was frightened of Dunk. Daeron also told Dunk that he would not fight, and after the first charge in the trial of seven he would stay on the ground and would also withdraw his accusations.

In the trial, Daeron was unhorsed by Ser Robyn Rhysling, and did as he had promised, staying on the ground. His own horse stepped on him, possibly breaking his foot, but otherwise he was uninjured. Nevertheless, it turned out that Daeron's dream was a true prophecy, as Prince Baelor died in Dunk's arms.[4]

Daeron's father Maekar ascended to the throne in 221 AC after the death of King Aerys I Targaryen, who had no other living heirs. This made Daeron the Prince of Dragonstone and heir to the Iron Throne, though he preferred to be called Prince of Summerhall as he considered Dragonstone "such a gloomy abode".[5] Daeron's brother Aemon served as his maester.[6]

Daeron married Kiera of Tyrosh, the widow of his cousin Valarr Targaryen.[3] Their daughter Vaella was born in 222 AC, and proved to be sweet but simple-minded.[5][6]

Daeron died some time before 233 AC, reputedly from a pox he caught from a whore.[6] His predeceasing his father was part of what led to the succession crisis after Maekar's death, which was resolved in the Great Council of 233 AC.[5]

Lord Commander Jeor Mormont tells his steward, Jon Snow, that Maester Aemon and his oldest brother Daeron, together with their other brothers, had been summoned to court when their father Maekar had been crowned king. Daeron, as the Prince of Dragonstone, was joined by his second brother Aemon, who had served as Daeron's maester. Jeor tells Jon that Daeron died of the pox, leaving only a feeble-witted daughter behind as his heir.[6]

During one of his last good days, Maester Aemon wonders if he will be reunited with his siblings, Daeron amongst them, when he dies.[7]

Aegon: My father is going to join the seven accusers. He says it is the only way to redeem Aerion's honor, and Daeron's.
Daeron: Not that I ever asked to have my honor redeemed. Whoever has it can keep it, so far as I'm concerned.[4]

My brothers have my measure when it comes to fighting and dancing and thinking and reading books, but none of them is half my equal at lying insensible in the mud.[4]

My dreams are not like yours, Ser Duncan. Mine are true.[4]

I'm doomed to some hell, I know. Likely one without wine.[4]

Baelor: Daeron has done this before. You should never have commanded him to enter the lists. He belongs on a tourney field no more than Aerys does, or Rhaegel.
Maekar: By which you mean he'd sooner ride a whore than a horse.[4]

Someday the dragons will return. My brother Daeron's dreamed of it, and King Aerys read it in a prophecy. Maybe it will be my egg that hatches. That would be splendid.[8]