From A Wiki of Ice and Fire
Jump to: navigation, search
This article is about a type of knight. For the novella, see The Hedge Knight. 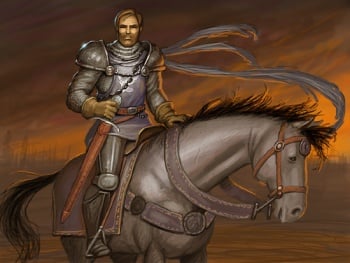 A hedge knight is a wandering knight without a master. Hedge knights travel the length and breadth of the Seven Kingdoms looking for gainful employment.

Hedge knights are so named because most of their worldly wealth is in their arms and horses and they generally must sleep outdoors, often under a hedge.[1][2] Contrary to landed knights, hedge knights own no land.[3] Most hedge knights travel in search of employment and often attend tourneys to earn money and display their prowess in hopes of being hired and making a name for themselves.[1] Hedge knights often join the hosts of lords and the royal processions of kings.[4][5][6] Most hedge knights are younger men.[7][8] 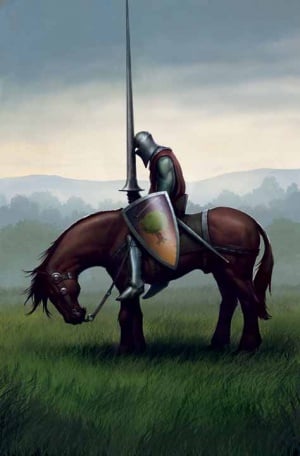 Ser Duncan the Tall astride Thunder, by Mike S. Miller

Ser Humfrey the Mummer, a hedge knight, was named by Queen Visenya Targaryen as one of the first members of the Kingsguard.[11]

The disreputable Ser Perkin the Flea crowned Trystane Truefyre during the Dance of the Dragons.[13]

The hedge knight Ser Arlan of Pennytree never ventured to the north with his squire, Dunk, as he thought that there were no hedges there, and all the woods full of wolves.[14] Dunk, who became a hedge knight himself, took Prince Aegon Targaryen as his squire at the tourney at Ashford Meadow.[1] At the Great Council following the death of King Maekar I Targaryen, some lords considered Aegon "half a peasant" because of his travels with Ser Duncan.[15]

Hedge knights from the Fingers, the Reach, and the Red Mountains attend the Hand's tourney.[16]

Other knights serve the lords who keep them, of from whom they hold their lands, but we serve where we will, for men whose causes we believe in.[1]

A hedge knight and a robber knight are two sides of the same sword.[9]

Hedge knights, she thought, old and vain and plump and nearsighted, yet decent men for all that. It cheered her to know that there were still decent men in the world.[9]

There are many fine hedges in the riverlands. The old ones are the best. There's nothing beats a hundred-year-old hedge. Inside one of those a man can sleep as snug as at an inn, and with less fear of fleas.[17]

Viserys told her tales of knights so poor that they had to sleep beneath the ancient hedges that grew along the byways of the Seven Kingdoms. Dany would have given much and more for a nice thick hedge. Preferably one without an anthill.[2]