The true knight is a concept that embodies all that a knight should aspire to be - exemplifying all the qualities of what knighthood stands for. He is a shining example to all and held in the very highest esteem. Very few knights are considered true knights, as achieving and maintaining such high and noble ideals is a hard duty.

There are Westerosi songs and stories, particularly those depicting honorable knights and chivalry, that are very popular amongst all strata of society. In particular, Sansa Stark is captivated by the concept of the true knight.[1]

A true knight must fully embrace the oath of knighthood:

True knights are supposed to: 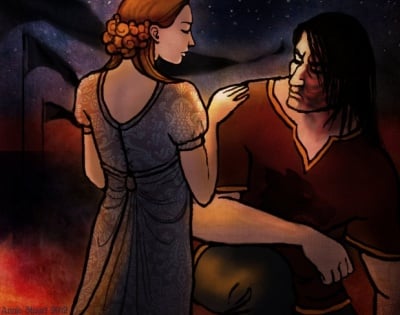 Sansa Stark assures Sandor Clegane that his brother Gregor is no true knight. Art by Heliotropa©

This man protected the weak, as every true knight must.[2]

—Baelor Targaryen to Maekar Targaryen, regarding Duncan the Tall

Knights are sworn to defend the weak, protect women, and fight for the right, but none of them did a thing. Only Ser Dontos had tried to help, and he was no longer a knight. No more than the Imp was, nor the Hound … the Hound hated knights … I hate them too. They are no true knights, not one of them.[6]

—thoughts of Sansa Stark after being beaten by Boros Blount

Sansa: True knights protect the weak.
Sandor: There are no true knights, no more than there are gods. If you can't protect yourself, die and get out of the way of those who can. Sharp steel and strong arms rule this world, don't ever believe any different.[7]

There are gods and there are true knights too. All the stories can't be lies.[7]

A true knight must defend the gentler sex.[3]

A true knight is the only shield a maiden needs.[3]

Old or young, a true knight is sworn to protect those who are weaker than himself, or die in the attempt.[5]

You are a true knight, Ser Lyle, to help a lady in distress.[4]

It is chivalry which makes a true knight, not a sword … without honor, a knight is no more than a common killer. It is better to die with honor than to live without it.[8]

—Barristan Selmy, educating his squires in the Great Pyramid