Sansa is enthralled by the tourney, especially the knights. Ser Gregor Clegane kills a new-made knight named Ser Hugh in a joust, and after a victory Ser Loras Tyrell gives her a rose. During the feast that follows, Prince Joffrey is very courteous, but afterward he orders the Hound to escort Sansa back to her chambers. When the Hound notices Sansa is avoiding looking at his burned face, he forces her to look and tells her how he acquired it. 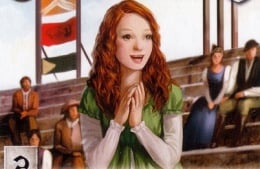 “It is better than the songs.” – by Linda Tso © Fantasy Flight Games

Sansa rides to the Hand's tourney in a litter with Septa Mordane and Jeyne Poole. The splendor takes Sansa’s breath away, the knights most of all. All of the Kingsguard are there in pure white cloaks and armor except Ser Jaime Lannister, the Kingslayer, who wears his famous gilded armor. The gigantic Ser Gregor Clegane thunders past like an avalanche. Sansa also spies Yohn Royce and whispers to Jeyne that he wears bronze armor that is thousands of years old, engraved in runes that protect the wearer. Septa Mordane points out Lord Jason Mallister in an eagle-winged helmet and silver-chased indigo armor. The girls giggle at the warrior-priest Thoros of Myr until the septa tells them he once scaled the walls of Pyke with a flaming sword. Although frightened by dark-skinned Jalabhar Xho, when Jeyne sees Lord Beric Dondarrion she states she is willing to marry immediately. The procession carries on, with many knights whom Sansa does not know. To Sansa it is better than in the songs.

They watch the tourney from a place of honor. Jory Cassel, in drab armor, wins two matches, but loses a well-fought third match to the freerider Lothor Brune when King Robert judges Brune’s lance to have been steadier and better placed. The other contestants from Winterfell do not fare as well. Sansa and Jeyne both scream sometimes when the riders crash together. Sansa notes that Jeyne often covers her eyes when a rider falls, but knows how a great lady must act, and draws the approval of Septa Mordane for her composure. 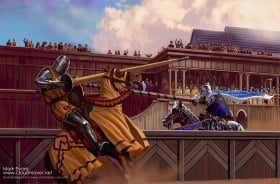 The jousting goes on all day and into the evening. Ser Jaime the Kingslayer rides brilliantly, defeating Ser Barristan Selmy, who has already unhorsed two men thirty and forty years younger than himself. The Hound and his immense brother Ser Gregor Clegane, the Mountain-that-Rides, seem unstoppable. On Ser Gregor’s second joust, his lance rides up and impales Ser Hugh of the Vale in the neck, killing him. Ser Hugh, in his shiny new armor, falls not ten feet from Sansa. Jeyne is so disturbed that she cannot stop crying, forcing Septa Mordane to take her away to regain her composure, but she never returns. Sansa is astonished to find herself unmoved by the death, until she realizes there will be no songs sung of Ser Hugh.

Lord Renly Baratheon, a crowd favorite, is unhorsed so violently by the Hound that he seems to fly backwards and the hard fall breaks a gold antler off his helm. Renly gives the broken antler to the Hound, who merely throws it into the crowd, which erupts in a riot until Lord Renly restores order. 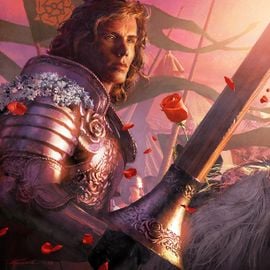 By the end of the day’s jousting, only four contestants remain: Ser Gregor Clegane, the Hound, Ser Jaime Lannister, and Ser Loras Tyrell. Sansa is entranced with Ser Loras, who is called the Knight of Flowers and has been giving white roses to various ladies in the crowd throughout the day. Finally, Ser Loras gives a red rose to Sansa, telling her, “No victory is half so beautiful as you.” Sansa is mesmerized for a long while until she notices Lord Petyr Baelish above her. He tells Sansa that she has her mother’s hair, touches her cheek, and leaves. The king announces that the last three jousts will wait for the next day.

Later, at the feast, Prince Joffrey sits next to Sansa. He has not spoken to her and she has not dared speak to him since the fight on the kingsroad. Sansa remembers thinking at first that she hated Joffrey for Lady’s death, but later she rationalized that it is not Joffrey but Queen Cersei and Arya that are responsible. Now Joffrey is the soul of courtesy, complimenting her by saying that Ser Loras has a keen eye for beauty. Sansa asks if Ser Loras will win, but Joffrey replies that either his uncle or his hound will defeat him, and that one day he will defeat them all. Joffrey fills her cup with wine, which makes her look at Septa Mordane, but when Joffrey fills the septa’s cup also, Sansa thanks him. He talks to her the rest of the night, making her laugh and helping her eat new foods like snails and trout baked in clay. She can see that the arm Nymeria savaged is still bothering him, but he does not complain.

The king grows louder with each course. Finally, drunk as a man can be, he starts shouting at Queen Cersei, telling her, “No! You do not tell me what to do, woman! I am king here, do you understand? I rule here, and if I say that I will fight tomorrow, I will fight!” Everyone stares, but no one interferes, and the queen storms off in silence. When Jaime comes to him, the king pushes him away hard, causing Jaime to fall. The king boasts that he can still knock Jaime in the dirt and that with his war hammer nobody can stand before him. Jaime replies stiffly, “As you say, your grace.”

Joffrey then tells Sansa it grows late and asks if she needs an escort back. With Septa Mordane asleep at the table, Joffrey calls to the Hound to take his betrothed back to her quarters, and deserts Sansa. The Hound asks Sansa if she expected Joffrey to escort her back himself and scoffs at the idea. Sansa’s dreamy night has suddenly vanished. She does not like the idea of the Hound taking her back to the apartments, but cannot wake Septa Mordane. 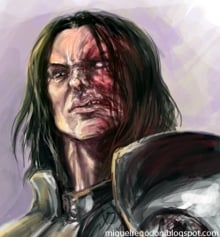 The Hound - by Miguel Regodón Harkness ©2012

As the Hound escorts her back, Sansa cannot stand the sight of his burned face, despite insisting to herself that a true lady would not notice. She compliments the Hound’s riding in the joust, giving him the knightly title “Ser.” He responds angrily that he is no knight and that he spits on the vows knights take. He tells her that his brother is a knight, and asks if he fulfills her naïve expectations. Sansa, lost for words, can only reply that no one could withstand Ser Gregor. The Hound merely laughs that Sansa’s septa has taught her well: she is just a pretty little bird reciting the words they taught her. When Sansa tells the Hound that he is frightening her, the scarred man only continues his story, insisting that during the tourney his brother noticed Ser Hugh’s improperly fastened gorget and purposely let his lance ride up to kill Ser Hugh.

The Hound then forces Sansa to look at his burned face. When she starts to cry, the Hound tells her how his brother Gregor burned his face when he was six for stealing a toy knight. The toy had been nothing to Gregor, who was already a six-foot-tall squire. He had lifted Sandor bodily up and pressed his face into a brazier. Four years later they had anointed Gregor with the seven oils, and after his said his vows he was called Ser Gregor.

Sansa now feels sad for the Hound, and is no longer afraid of him. The silence goes on for a long while, and finally she touches the Hound and assures him that his brother is no true knight. They travel the rest of the way in silence. When he has finally delivered her to the corridor outside her bedchamber, Sansa thanks him. The Hound’s only reply is a warning; keep the story about his face a secret or he will kill her.