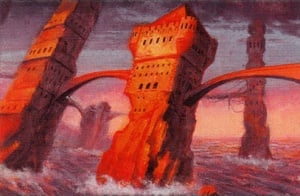 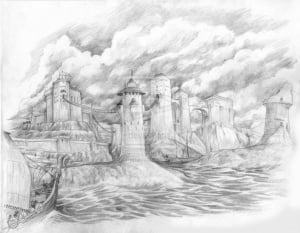 Pyke is so old that its original builders and lords are unknown.[1] The castle was once larger and located on the island of Pyke, but unstable earth led to some portions of the cliff falling into the sea. The surviving structures are built upon stone stacks.[8][1]

Qhored I Hoare, King of the Iron Islands, murdered the sons of Bernarr II Justman, King of the Trident, at Pyke while they were his hostages.[9][6]

In the aftermath of Aegon's Conquest, Vickon Greyjoy, Lord Reaper of Pyke, became the new Lord of the Iron Islands, ruling from the Seastone Chair at Pyke.[10]

The black council of Rhaenyra Targaryen sent ravens to Pyke seeking the aid of Lord Dalton Greyjoy during the Dance of the Dragons.[11] The overtures to Pyke from Aegon II Targaryen were ignored, and the Greyjoys eventually aided Rhaenyra by attacking the westerlands.[12] Dalton was killed at Faircastle in 133 AC.[13]

When the Iron Islands were invaded by westermen amid the ironborn's struggle for power in 134 AC, Pyke resisted House Lannister's assault. Rodrik Greyjoy, the half-brother of Lord Toron Greyjoy, was captured and taken to Casterly Rock to be a fool, however.[14]

During Greyjoy's Rebellion, the siege of Pyke was the final battle. King Robert I Baratheon, along with Lord Eddard Stark, mustered thousands of men and invaded the island of Pyke thorough Lordsport. They captured the castle after bringing down the southern part of the outer wall of Pyke using siege engines.[2][17] Theon, the last surviving son of Lord Balon, was taken from Pyke to Winterfell as a hostage by Lord Stark.[18] 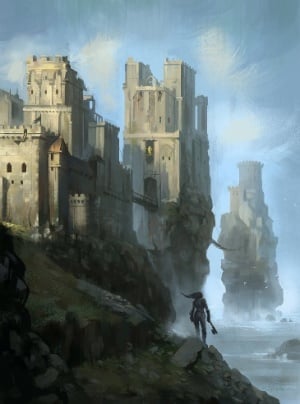 Euron Crow's Eye has Maester Wendamyr summon the ironborn captains to Pyke to pay homage to their new king, but his brother Aeron instead calls for a kingsmoot on Old Wyk.[15] Despite the efforts of Aeron, Euron is confirmed king at the gathering.[21] 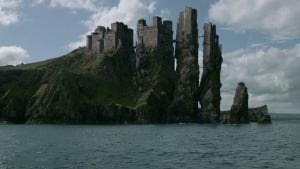 The Greyjoy stronghold stood upon a broken headland, its keeps and towers built atop massive stone stacks that thrust up from the sea. Bridges knotted Pyke together; arched bridges of carved stone and swaying spans of hempen rope and wooden planks.[15]