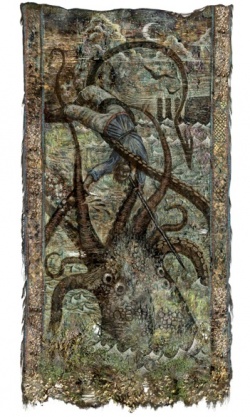 A kraken is a large sea creature, similar to a giant squid, said to be able to pull down a whaling ship.

Tales of the Seven Kingdoms claim that large dragons could pluck krakens from the sea.[3] According to ironborn legend, Nagga, the first sea dragon, was able to feed on krakens and leviathans.[4] The Seastone Chair was carved in the shape of a great kraken from oily black stone.[2] Cape Kraken is a peninsula historically contested by ironborn and northmen.[5]

The Summer Sea south of Dorne is said to be infested with krakens,[6] as are the waters of the northern Sunset Sea.[7]

The legendary Hrothgar had a kraken-summoning horn,[8] and House Celtigar is rumored to have a similar horn among their treasures at Claw Isle.[9]

Hundreds of krakens are said to have been drawn to the bloody waters of the Iron Islands when ironborn fought each other after the burning of Harrenhal. Lodos called upon krakens to attack the fleet of King Aegon I Targaryen, but none did so.[10]

The crew of Ser Eustace Hightower's Lady Meredith claimed that Ser Norman Hightower's Autumn Moon was brought down by a kraken during a storm in the southern Sunset Sea in 56 AC.[11]

A painting at the Merman's Court depicts a kraken fighting a leviathan.[12] 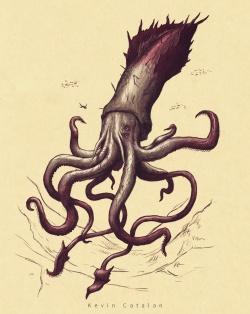 A kraken, by Kevin Catalan ©

Jorah Mormont tells Daenerys Targaryen the Smoking Sea north of Valyria is demon haunted and a treacherous route, one where krakens could pull their ship under.[3]

During the small council meeting to discuss the progress of the War of the Five Kings, Varys tells the attendees that a kraken had been seen off the Fingers. It reportedly attacked an Ibbenese whaler ship and pulled it under.[13]

Lady Valena Toland tells Princess Arianne Martell that there are tales of krakens off the Broken Arm, pulling under crippled galleys. Valena says their maester claims that the blood draws them to the surface. She adds that there are bodies which remain in the water, while a few have washed up on Ghost Hill's shores.[14]

Krakens rise from the sea, Theon, or did you forget that during your years among the wolves?[15]

A lion may be fierce enough on land, but at sea the kraken rules supreme.[16]