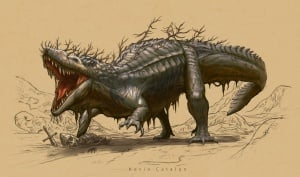 A lizard-lion, depicted by Kevin Catalan ©

A lizard-lion is a large semi-aquatic reptile native to the bogs of the Neck.

Lizard-lions resemble partially submerged logs floating still in the water.[1] They live in the water, in slow streams and deep swamps,[2] and have teeth like daggers.[3]

Lizard-lions dwell in the flooded moats around the towers of ruined Moat Cailin.[4] As crocodiles live in the Zamoyos in Sothoryos,[5] lizard-lions appear to be another type of crocodilian reptile.

Crannogmen of the Neck hunt lizard-lions for food,[6] and according to songs the ancient Marsh Kings rode lizard-lions.[7] The sigil of House Reed depicts a black lizard-lion on grey-green.[8]

While crossing the Neck as part of the royal progress back to King's Landing, Mycah shows a lizard-lion to Arya Stark.[1]

After outlaws vanish into the Neck, Ser Kennos of Kayce hopes they will be eaten by lizard-lions.[9]

In his science fiction novel Tuf Voyaging, George R. R. Martin describes a "lizard-lion" as a reptile with a long, whiplike tail and a long snout similar to an alligator's. It is unknown if lizard-lions in Westeros are similar.