The brotherhood without banners,[1] also known as the knights of the hollow hill[1] and the forgotten fellowship,[1] is an outlaw group who initially fights Lannister rule in the name of King Robert I Baratheon. Led by the Lightning Lord, Beric Dondarrion, the group is founded in the riverlands by soldiers and nobles who were sent by the then-Hand of the King, Eddard Stark, to bring Gregor Clegane to justice. After they are ambushed while crossing a ford and nearly defeated, the group continues the fight as a guerrilla group. Their numbers increase as they are joined by defeated soldiers from other battles, deserters, and refugees from the War of the Five Kings. Every man of the brotherhood receives a knighthood from Beric. 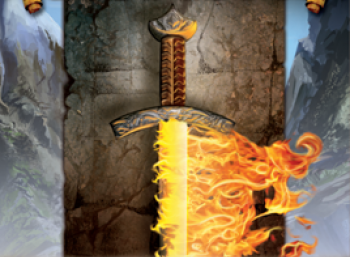 The brotherhood without banners. ©FFG

After reports of marauding raiders in the riverlands reach King's Landing, the Hand of the King, Lord Eddard Stark, sends out a force under the command of Lord Beric Dondarrion, including some of his own Stark men, to stop the marauders and bring them to justice. According to witnesses the raiders are led by a man of monstrous size, whom Ned Stark realizes can only be Ser Gregor Clegane. Beric, having the command of the party, leads his men into an ambush and is killed by Gregor in the battle at the Mummer's Ford. It is later revealed that Lord Tywin Lannister's intention with Gregor's raiding was to draw Eddard to them to be captured and exchanged for his son, Tyrion Lannister, who had been taken prisoner by Ned's wife, Catelyn. Because he had been wounded Eddard was unable to lead the party himself, and instead entrusted the leadership of the party to Beric.[2]

At the crossroads inn, Tywin tells his brother, Ser Kevan Lannister, and Tyrion that Thoros of Myr and Beric Dondarrion continue to plague their foraging parties.[3]

As Arya Stark travels through the riverlands, she hears numerous reports of outlaws. There are conflicting reports that Lord Beric has been killed. Gregor Clegane and the Mountain's men, especially the Tickler, torture captives for information.[4]

A group of outlaws capture Arya Stark, Gendry, and Sandor Clegane and bring them to a hideout in the hollow hill. Lord Beric Dondarrion is revealed to be alive but with savage wounds. He puts Sandor on trial for Lannister atrocities, which are denied. When Arya accuses Sandor of murdering the butcher boy Mycah, Beric allows him to prove his innocence in a trial by combat. He fights Sandor personally with a flaming sword. Although Sandor kills Beric, he is resurrected by Thoros again, to the astonishment of Arya.[1] The brotherhood allows Sandor to leave, though they seize his possessions in exchange for a deed.

The brotherhood reveal their story to Arya. After Beric's death in the battle at the Mummer's Ford, Beric was accidentally resurrected by Thoros of Myr using the last kiss funeral custom of his religion. The revived Beric swore to uphold his oath to King Robert I Baratheon and resume his quest for Gregor's head. Thoros reveals to Arya that there had been voices within the group that thought they should surrender themselves, but Beric convinced everybody to continue the fight in the name of King Robert as to uphold the spirit of Robert's decree and protect the people.

The brotherhood fought a guerrilla war against the invaders. At first the Lannisters and their allies were their targets, but eventually the brotherhood saw their task as to protect the smallfolk against all who would harm them. Because of this, northern raiders and common outlaws are now also targeted by the brotherhood.

The brotherhood are in high spirits. They believe in the nobility of their cause and gain much support from the smallfolk, who provide them with information and, sometimes, food. They are fairly successful in capturing their enemies, and continue to show their faith in the righteousness of their cause by always providing their prisoners with justice; namely a trial. Due to the odds against them, Beric has been killed several more times, but is resurrected each time by Thoros. Some outlaws, such as Harwin[2] and Lem,[5] refuse to acknowledge this and, according to them, Beric has just been gravely wounded and Thoros is a competent healer.

Arya and Gendry accompany Beric's band as they travel through the riverlands; Arya watches as they fight Bloody Mummers in the battle at the burning septry. Gendry joins the brotherhood and is knighted by Beric.[5] Lord Dondarrion decides to hold Arya until the brotherhood can ransom her to her Tully relatives. Arya escapes from the brotherhood, but is captured by Sandor.[6]

Later, Merrett Frey is sent to Oldstones to ransom the captured Petyr Frey from outlaws. When he arrives, he sees that Petyr has already been hanged. Members of the brotherhood reveal themselves and accuse Merrett of participating in the murderous Red Wedding. Although Merrett denies any culpability, the outlaws reveal a witness, Lady Catelyn Stark, who was slain at the wedding and then tossed into the Green Fork. The undead Catelyn has the outlaws hang the Frey.[7] 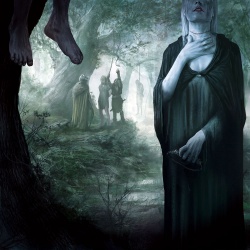 Ser Jaime Lannister had once sworn an oath to Catelyn Stark that he would return her daughters, Sansa and Arya Stark, which Jaime tasks Brienne of Tarth with completing. Brienne and her companions, Podrick Payne and Ser Hyle Hunt, are rescued from Biter at the inn at the crossroads by the brotherhood. They bring the trio to a cave, possibly the hollow hill, and bring the wounded Brienne before the undead Catelyn, who is now called Lady Stoneheart.

Thoros of Myr reveals to Brienne that after the Red Wedding the brotherhood found the body of Catelyn. Harwin asked Thoros to resurrect her, but he refused because she had been dead for too long. Instead of Thoros, Beric gave Catelyn the kiss of life, trading his life for hers and resurrecting Catelyn's half-decayed body; what convinced him to do so is unknown. Though rendered nearly mute from her slit throat, Catelyn can croak out orders that are barely intelligible. She took the name Lady Stoneheart and became the brotherhood's new de facto leader.[8]

Under the leadership of the undead Stoneheart the brotherhood has embarked on a campaign of revenge against those who were their enemies. Participants of the Red Wedding, particularly the Freys, are their targets. For instance, after he had been dismissed from Riverrun by Jaime, Ser Ryman Frey is ambushed by the brotherhood and hanged like Merrett, along with his entire party. According to Thoros, the brotherhood has fallen low, and is no different from a regular band of outlaws. Many have left the organization since Stoneheart assumed leadership.

Brienne is accused of aiding the Lannisters. The undead Catelyn recognizes Brienne, but is uninterested in any argument, since the delirious Brienne had called out for Jaime so many times during her recovery and carries the young King Tommen I Baratheon's seal and the Valyrian steel sword Jaime gave her, Oathkeeper. Instead, she demands that Brienne kill Jaime or suffer death herself. Brienne refuses because she had been rescued by Jaime at Harrenhal and believes him to be a changed man. Lady Stoneheart then gives the command for Brienne to be hanged with her companions. At the last moment, when the brotherhood pull upon the rope, Brienne screams a word.[8]

At Riverrun, Jaime meets the singer Tom of Sevenstreams, who unbeknownst to him is a member of the brotherhood.[9]

Ser Jaime Lannister is at Pennytree when scouts bring a captive Brienne of Tarth to him. Brienne claims that she has found Sansa Stark, but only Jaime can accompany her, or the Hound will kill her.[10]

Quotes about the brotherhood

Robert is slain, but his realm remains. And we defend her.[1]


Tom: The brotherhood without banners. The knights of the hollow hill.
Sandor: Knights? Dondarrion's a knight, but the rest of you are the sorriest lot of outlaws and broken men I've ever seen. I shit better men than you.


Beric: Any knight can make a knight, and every man you see before you has felt a sword upon his shoulder. We are the forgotten fellowship.[1]
—Thoros, Tom, Sandor Clegane, and Beric Dondarrion

We were king's men, knights, and heroes... but some knights are dark and full of terror, my lady. War makes monsters of us all.[8]

—Thoros of Myr to Brienne of Tarth