Edric Dayne, also known as Ned, is the Lord of Starfall and the head of House Dayne. His father, whose name is unknown, was the elder brother of Ser Arthur, Lady Ashara, and Lady Allyria Dayne.

At the time of A Storm of Swords, Edric is twelve years old.[3][4] He is described as having pale blond hair, and dark blue eyes that appear almost purple.[3] He wears a pale purple cloak. He is shy and good-natured, and very polite. He has never killed anyone.[3] 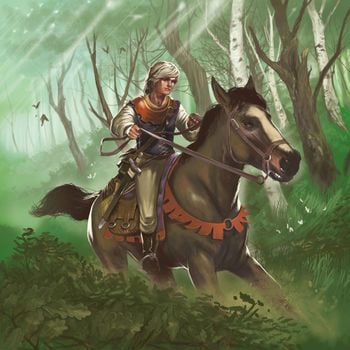 Edric was born at Starfall, in Dorne, to Lord Dayne and his wife. Edric's mother did not have enough milk for him when he was born, so he was nursed by Wylla, a servant at Starfall.[3] At some point, Edric was told that Wylla was the mother of Eddard Stark's bastard, Jon Snow. When Edric was seven, his aunt Allyria was betrothed to Lord Beric Dondarrion, and Edric went to Blackhaven with Beric to serve as his page. Beric raised Edric to squire when he turned ten. He once won a prize riding at rings.[3]

Edric is at the Hand's tourney in King's Landing, where he sees Lord Eddard Stark. Edric wants to go and speak with him, but he does not know what to say. He also sees Sansa Stark at the tourney, when Ser Loras Tyrell gives her a rose.[3]

As Lord Beric Dondarrion's squire, Edric is part of the force sent by Eddard to the riverlands to apprehend Ser Gregor Clegane.[5] After the force is ambushed in the battle at the Mummer's Ford, Edric pulls the dying Beric out of the river and stands over the body while the battle rages around them.[3]

Edric continues to squire for the revived Lord Beric, who establishes the brotherhood without banners. They move throughout the riverlands, fighting to protect smallfolk from the War of the Five Kings.

When Arya Stark is taken by the brotherhood, she sees that Lord Beric has a young squire named Ned, who helps remove his breastplate. She is unnerved by hearing the name "Ned", the same as her father's. Ned brings Beric his sword, surcoat, and shield before Beric fights a duel with Sandor Clegane. After Beric is killed in the duel, Thoros of Myr has Ned help him with Beric's body before he revives him with the last kiss.[6] Ned fights alongside Beric during the battle at the burning septry.[7]

Ned attempts to befriend Arya, though she is wary, and her friend Gendry is scornful of their interactions. He tells her that he saw her father and sister at the Hand's tourney. Ned tells Arya that he and her half-brother Jon Snow are milk brothers; that is, his wet nurse Wylla, who has been a servant of his family for many years, is Jon's mother, and swears that this is true on the honor of his house.[3] When Arya asks who he is, Ned reveals he is Lord Edric Dayne. Ned also tells Arya about his family, about how his aunt Ashara committed suicide over her broken heart. He is surprised that Eddard Stark never spoke of her. He hesitantly tells Arya that his aunt Allyria told him that Ashara and Eddard fell in love at the tourney at Harrenhal. Arya is upset to hear that her father might have loved someone besides her mother Catelyn, and though Edric tries to apologize, she does not want to hear it.[3]

After Beric's final death, Edric and several members of Beric's band go their separate ways from those who choose to follow the resurrected, vengeful Lady Stoneheart.[8][2]

Edric Dayne: I won a prize once, riding at rings.

Arya Stark: I never learned the lance, but I could beat you with a sword. Have you killed anyone?