From A Wiki of Ice and Fire
(Redirected from Bloody Mummers)
Jump to: navigation, search

The Brave Companions are a sellsword company of considerably ill repute. The company comprises criminals and outcasts from many nations.

Led by Vargo Hoat, a tall, gaunt, lisping man from Qohor, the band is often called the Bloody Mummers by the Westerosi for its members' brutality and outlandish appearance, though they find this name insulting. They are also called the Footmen for Vargo's practice of cutting off the hands and feet of prisoners and the Toes of the Goat for their standard. Their standard is a black goat with bloody horns, symbolizing the Black Goat of Qohor.[2]

According to semi-canon sources, the Brave Companions are not as old as other mercenary companies and were established before Vargo Hoat became their leader. Their numbers consist of the scum of the west, and a few from the east and the south. Their previous leader was likely not a Qohorik, and their next might possibly be a Lyseni, a Dornishman or even an Ibbenese.[3]

Their diverse ranks are said to include copper men with bells in their braids;[2] lancers astride black-and-white horses;[2] bowmen with powdered cheeks;[2] squat hairy men with shaggy shields;[2] brown-skinned men in feathered cloaks;[2] swordsmen with fantastic forked beards dyed green and purple and silver;[2] spearmen with colored scars that cover their cheeks;[2][4] Myrish crossbowmen,[4] pale Lyseni;[5] and dark Dornishmen.[5] 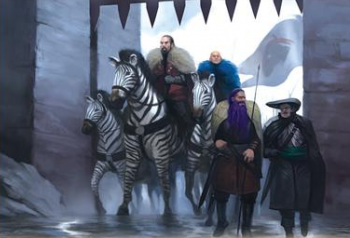 The Brave Companions are employed by Lord Tywin Lannister and let loose upon the riverlands to burn and pillage in an attempt to draw out and capture Robb Stark, so that he can be traded with Jaime Lannister. Vargo Hoat and the other reaver captains each lead three hundred cavalry; he may have other freeriders under his command in addition to the Brave Companions.[6]

Lord Tywin brings the Brave Companions to Westeros during the War of the Five Kings to forage and terrify the lands of his enemies. They are ordered to fortify Harrenhal in Tywin's absence and are joined by Rorge, Biter, and Jaqen H'ghar on the way. Distinct members include Shagwell the Fool, Septon Utt, Qyburn, and Urswyck the Faithful.[2]

During their stay at Harrenhal, Vargo's men quarrel with Ser Amory Lorch's garrison, causing both to be reprimanded by Tywin. On the night they arrive, a fight breaks out between the company and Lannister men, resulting in the deaths of Ser Harys Swyft's squire, two wounded Brave Companions who are later hanged, and one of Lord Lewys Lydden's archers who started the fight.[2]

After Tywin leaves Harrenhal, Vargo secretly aligns with Lord Roose Bolton in support of Robb Stark, King in the North. The Brave Companions bring northmen led by Robett Glover and Ser Aenys Frey into Harrenhal as prisoners with the intention of freeing them to attack Amory's garrison from the inside. Separately, Jaqen, Rorge, and Biter help Arya Stark free the northerner prisoners. With the northmen freed early, the Companions help slaughter the Lannister garrison and open the castle's gates to Roose after the fall of Harrenhal.[7] Vargo becomes Lord of Harrenhal for his service to the north, and Lord Bolton eventually tasks the Brave Companions with rooting out Lannister forces in the surrounding countryside.

Vargo divides his men into four bands, giving smaller ones to his trusted companions and lieutenants Utt and Urswyck while he leads the largest one himself.[8] He uses his past affiliation with Lord Tywin to fool Lannister garrisons that are unaware of their betrayal, before seizing them and returning with bags of coin as well as baskets of heads.[8] Utt's camp is attacked by a pack of wild wolves, who kill two of their horses.[8]

Iggo, an Ibbenese axeman, a Dornish archer, and a Lyseni hunt Arya, Gendry, and Hot Pie after they flee Harrenhal, but the four Companions fall prey to a wolf pack led by Arya's direwolf, Nymeria.[5] Mummers forage as far south as Stoney Sept.[9]

Beric Dondarrion and Thoros of Myr lead the brotherhood without banners in attacking a sept held by a detachment of the Brave Companions which includes, among others, a Myrman, two Ibbenese, three Volantenes, and several Dothraki. Captured Companions, including Utt, are hanged by the brotherhood after this battle at the burning septry.[4]

Vargo grows to suspect that his new Bolton allies will join the Lannisters. When Urswyck's group captures Ser Jaime Lannister, Vargo has Zollo chop off Jaime's swordhand to drive a wedge between Tywin and Roose.[10] Qyburn treats Jaime's stump.[11] The ploy to drive a wedge between Tywin and Roose does not work, however, and Roose soon abandons Harrenhal and leaves it for Vargo. While attempting to rape the imprisoned Brienne of Tarth in Harrenhal, Vargo's ear is bitten off and the wound becomes infected.[12]

With Lannister reprisal looming and Vargo slowly maddening from a fever, most of the Companions desert the group. By the time Gregor Clegane retakes Harrenhal[13] and kills Vargo, the band has dissolved into smaller groups.[14]

In the aftermath of the war, many Brave Companions become bandits and vagabonds. One particular group led by Rorge burns and slaughters during the raid on Saltpans. Because Rorge wears the infamous helm of Sandor Clegane, these deeds are attributed to the Hound.[15]

When Brienne comes across Timeon, Shagwell, and Pyg at the Whispers, Timeon tells her that Urswyck was heading towards Oldtown with a small band. The three Companions are then killed by Brienne.[16] Rorge and Biter are later killed in a confrontation with Brienne at the crossroads inn.[17] Zollo, Togg Joth, and Three Toes remain on the run throughout Westeros.[18]

Qyburn rises to the position of master of whisperers for Queen Cersei Lannister[19] and is allowed to continue his experiments with people Cersei wants rid of.[20] 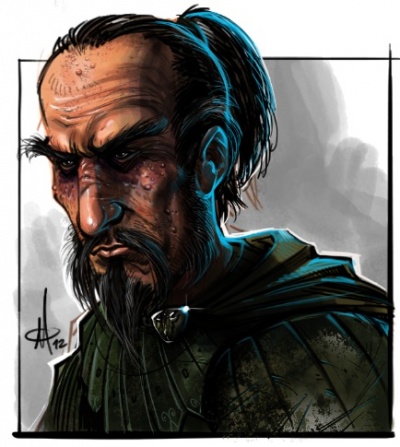 Vargo Hoat, commander of the Brave Companions- by Matt Olson ©

You and your father lost too many battles. We had to trade our lion pelts for wolfskins.[10]

The Brave Companions did not fight in the Battle of the Blackwater, yet they died there all the same.[22]